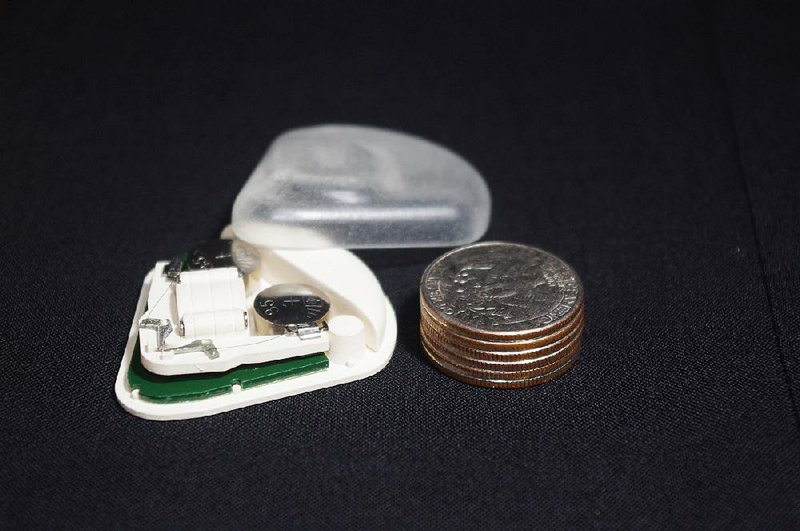 The SFC Fluidics’ min-ePump is not much bigger than a stack of quarters. The tiny device is used to test drugs on animals.

The funding comes from a Phase 2 small-business research grant from the National Institutes of Health for the creation of the drug-delivery system for use in small-animal research. The device, known as the minePump, lets animals used in drug testing, like rats, remain untethered, so they can move normally and interact with other test animals.

Ashley Shemain, vice president of marketing and business development for SFC Fluidics, said currently most methods of drug testing on small animals limit the animals’ movement, and that affects their behavior, often requiring that the animals be isolated. SFC Fluidics’ tiny pumps allow researchers to deliver drugs to test animals in a way that leaves them able to freely interact with other test animals, allowing for a better assessment of their social behaviors.

The pumps have applications in research for drugs that deal with substance abuse, mood disorders, Alzheimer’s disease, Parkinson’s disease, post-traumatic stress disorder and other ailments, according to the company.

Beyond the lab, the minePumps could have applications in veterinary medicine, Shemain said. For example, the devices could be used to administer certain medicines to pets.

The technology is an offshoot of SFC Fluidics’ ongoing work to develop a compact, artificial pancreas device to help insulin-dependent diabetics.

Dr. Mildred Randolph, director of laboratory animal medicine at the University of Arkansas for Medical Sciences, said the min-ePump could be a piece of revolutionary technology. She said while there are similar devices on the market, the level of precision and reliability offered by the min-ePump is remarkable if the company can deliver on that promise.

She said that while tethering animals in the lab to administer medicines is a well-established method, it greatly limits the animals’ mobility and can be stressful. She said the concept of a small, implantable pump that can be controlled remotely would “result in much cleaner research.”

Randolph noted such a pump could be used to administer insulin to pets that have diabetes, a common condition. She said she could also see applications for it in zoos, or other venues where medicine has to be given to nondomesticated animals.

Paige Ebert, president of the American Association for Laboratory Animal Science, said in response to email questions that while she doesn’t have knowledge of the min-ePumps full capabilities, this type of implantable pump would support the three R principles — replacement, reduction and refinement. The three Rs were developed more than 50 years ago as a framework for more humane animal research.

Replacement refers to methods that avoid or replace the use of animals in testing. Reduction refers to a lower number of animals used per experiment, and refinement focuses on methods to minimize animals’ suffering and improve their welfare.

She said some of the challenges in getting the minePump to market pertain to its ease of use, the size and shape of the pumps, the size of the drug reservoir and the per-unit cost.

Shemain said the funding from the National Institutes of Health will be used to further validate the viability of the technology, work on additional miniaturization and prepare the technology for commercial use.

He said the work won’t initially create any new jobs at SFC Fluidics, which employs eight people, but further work to commercialize the min-ePump would likely result in more positions with the company.

In mid-2014, SFC Fluidics completed a $2 million Series B investment round to help develop the disposable insulin patch pump, expected to be 2 inches in diameter. An unnamed strategic partner with experience in the production of medical devices cleared by the U.S. Food and Drug Administration led the investment round.

At the time, SFC Fluidics said the low-cost pump could improve the quality of life for insulin-dependent diabetics who rely on manual injections.