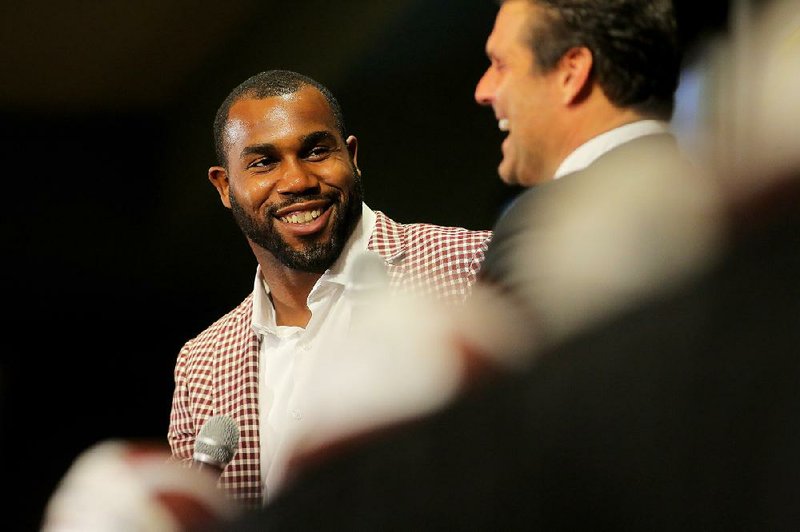 A federal judge has ordered Michael Vick of Little Rock, a former financial adviser to former Arkansas Razorback football player Darren McFadden, to pay $3,382.50 to cover McFadden's attorney's fees for trying to get Vick to comply with court-ordered requests for information.

In the petition, McFadden, now a Dallas Cowboys running back, noted that Moody had granted McFadden's May 8 motion seeking to compel Vick to turn over the information sought in a 2016 lawsuit.

McFadden sued Vick, his former business manager, in 2016, accusing him of misappropriating millions of dollars of McFadden's money in his younger days.

Moody said that upon granting a motion to compel, a judge must require the party whose conduct necessitated the motion to pay reasonable expenses involved in making the motion, unless it was filed before a good-faith effort was made to obtain the information without court intervention, the nondisclosure was substantially justified or other circumstances would make the award unjust.

Moody said McFadden's attorneys had attempted to confer in good faith with Vick's attorney, Willard Proctor Jr. of Little Rock, and that "the failure of ... Vick to respond to the discovery requests was not justified."

McFadden's attorneys said that, before filing the motion to compel, they had sent "numerous communications" to Proctor that were ignored.

"Counsel for Vick ignored and did not respond in any capacity" to meet-and-confer requests, according to Grant Fortson of Little Rock, who is representing McFadden along with the Beverly Hills, Calif., law firm Singh, Singh and Trauben.

Moody granted the motion to compel on July 7, ordering Vick to "serve full and complete answers" to McFadden's interrogatories and to "produce any and all responsive documents" within his possession or control.

The judge also ordered Vick, through Proctor, to "produce an affidavit stating what steps Vick has taken to identify, locate and produce all responsive documents" in response to an early request for the information.

In a response to the petition for attorney's fees, Proctor maintained that he was in contact with McFadden's attorneys and "was attempting, in good faith, to negotiate a resolution of this entire matter."

Proctor argued that "an award of expenses would be unjust in this matter. [Vick] has finite resources. As a result, he instructed counsel to settle this matter. ... Because of his limited resources, Defendant wanted every effort and focus to be upon making an offer to settle that would resolve this case."

Proctor said the expense required to adequately respond would put Vick "in a position where he would not have the resources to fund an offer of settlement."

Proctor added that Vick was "merely trying to keep legal costs down in an effort to be in a better position to negotiate," and said he had explained that to McFadden's attorneys in an email.

Proctor also said that on June 15, he provided McFadden's attorneys with "appraisals of property that were being offered as a part of a settlement package" and a day later made a settlement offer on Vick's behalf.

McFadden's attorneys filed the petition on the same day they had a telephone conference with Proctor, knowing the conference was scheduled, Proctor argued, attaching emails as evidence.

But Moody found that "no circumstance exists which would make an award of expenses unjust."

In a June 16 email he attached to his response to the fees petition, Proctor indicated that McFadden has filed a lien against a home at West 15th and South Battery streets in Little Rock that McFadden has accused Vick of giving to his sister, Jacqueline Vick, to hide it from McFadden. Proctor wrote that the lien "makes it increasingly difficult for us to maintain a settlement posture."

Proctor also said in the email to Simran Singh of Singh, Singh and Trauben that "Mr. Vick has authorized me to offer [a blacked-out amount] in cash, the transfer of the property at [blacked-out address] to your client," and the transfer of another property to McFadden "in exchange for a dismissal and full release of all claims against him, his wife, his businesses, his sister and her family, his children and any other family members."

McFadden has also filed two other federal lawsuits over the same matters. One, against Ameriprise Financial Services Inc., which was Vick's employer when he was McFadden's business manager, has been stayed pending a required arbitration before the Financial Industry Regulatory Authority. The other, which is pending before U.S. District Judge Leon Holmes, names Jacqueline Vick and her husband, Cheo Clark.

Proctor and attorney Evelyn Moorehead of Little Rock have asked that the suit against Vick's sister and her husband be dismissed. They say McFadden has accused Vick of fraudulently transferring a multifamily property at 1508 and 1512 S. Battery St. to Jacqueline Vick for $289,000 in cash and a gift of $211,000 in equity, but, "Pleadings that are mere conclusions of alleged facts are not deserving of assumptions of truth."

They argued that the lawsuit must be dismissed "because it fails to state a claim upon which relief may be granted."