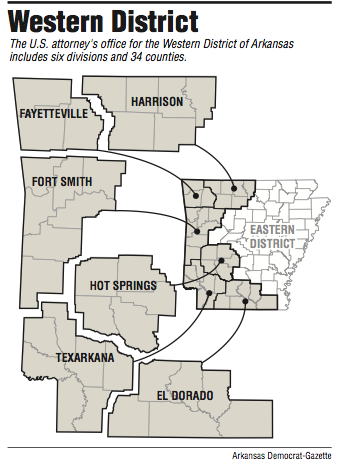 A map showing the Western District

President Donald Trump has nominated an ethics and compliance director at Wal-Mart Stores Inc. to be the next U.S. attorney for the Western District of Arkansas.

Duane A. Kees, known as "Dak," currently focuses on corporate investigations for the Bentonville-based retailer, according to a news release the White House sent out Friday. He's officially director of global ethics governance, anti-corruption.

Kees' primary focus is on overseeing and managing allegations of corruption and violations of the Foreign Corrupt Practices Act, according to his LinkedIn profile.

"Dak is an accomplished attorney and adviser who has delivered strong results as a respected member of Wal-Mart's ethics team," said Jay Jorgensen, the retailer's chief ethics and compliance officer. "We are proud that he has been selected for this important role. He will do an outstanding job."

Kees was born in Little Rock and earned two degrees from the University of Arkansas, Fayetteville -- a bachelor's in political science and a law degree.

He served in the U.S. Army Judge Advocate General's Corps for eight years, according to the release.

"During his time on active duty, he prosecuted and defended a variety of complex cases and earned two Bronze Stars and a Meritorious Service Medal," according to the release. "He is currently a major in the Arkansas National Guard."

Kees was deployed to Afghanistan for a year and served a 15-month rotation in Iraq.

Arkansas' two U.S. senators -- both of whom are Republicans -- applauded Kees' nomination.

"Dak's strong investigative skills and extensive hands-on experience handling complex litigation in criminal courtrooms make him an excellent nominee for U.S. attorney for the Western District," Sen. John Boozman said in a news release. "His service as an Army JAG officer is a unique quality that strengthens his case by bringing additional skill sets to the office."

In the same news release, Sen. Tom Cotton said it was a "strong choice."

"Dak Kees has a keen legal mind, a record of military service, and a deeply held commitment to our state," Cotton said. "I'm confident he'll serve the people of Arkansas well while also upholding the rule of law. I thank him and his family for accepting the call to serve."

According to his LinkedIn website, Kees went to work for Wal-Mart in June 2014.

He spent the previous year practicing law through The Kees Law Group.

Kees' military experience helped him develop "a skill set based on international law, complex litigation, and a wide range of intricate negotiations," according to LinkedIn.

"As an Army prosecutor, Dak effectively prosecuted dozens of military felonies and federal court cases ranging from drug distribution and sexual assault to murder," according to the website. "He also prosecuted crimes involving international law."

In his "seventh wave" of nominations, Trump announced three other choices for U.S. attorney Friday: Erin Nealy Cox of Texas, Matthew Krueger of Wisconsin and Christina Nolan of Vermont.

"The United States attorney serves as the chief federal law enforcement officer within his or her federal judicial district," according to the White House release. "These ­­­­four candidates share the president's vision for 'Making America Safe Again.'"

The U.S. attorney's office for the Western District of Arkansas includes 34 counties stretching from Texarkana and El Dorado in the south to Fayetteville and Harrison in the north.

Kenneth Elser is serving as interim U.S. attorney after Conner Eldridge resigned from that job to run for U.S. Senate against Boozman in 2016. Boozman received 60 percent of the vote.

The U.S. attorney's office currently has a staff of 19 attorneys and 18 support staff within the district.

Kees' nomination must be confirmed by the U.S. Senate before he can become U.S. attorney.

Trump previously nominated Cody Hiland of Conway to be U.S. attorney for the Eastern District of Arkansas. Hiland is currently prosecutor for Arkansas' 20th Judicial Circuit.

"Sen. Cotton and I will work with our colleagues to get Dak's nomination, as well as Cody Hiland's nomination for the Eastern District post approved by the Senate as quickly as possible," Boozman said. "We want to get them on the job quickly so they can begin working to make our communities safer."