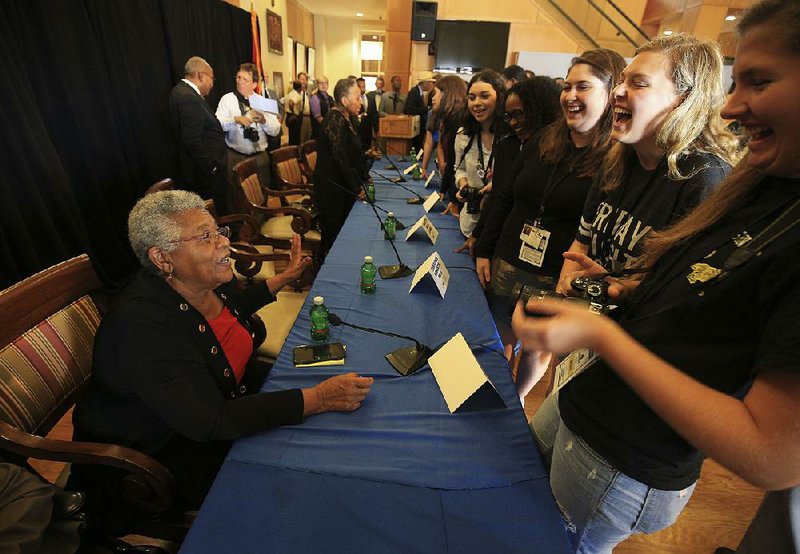 Minnijean Brown Trickey (left) talks with Central High students Friday at the University of Arkansas Clinton School of Public Service after members of the Little Rock Nine had talked about their experiences. ( Staton Breidenthal)

Eight of the nine students who in 1957 desegregated Central High School recalled their role in what became a civil-rights milestone and addressed during a news conference Friday the racial shortcomings that have persisted over the past six decades.

"You don't have to be perfect to change the world," said Minnijean Brown Trickey, one of the eight, during an hourlong discussion at the University of Arkansas Clinton School of Public Service.

Now in their mid-70s, they became widely known as the Little Rock Nine when their efforts to desegregate Central High School drew international attention. Gov. Orval Faubus dispatched the Arkansas National Guard to block their entry, and mobs taunted the children before President Dwight Eisenhower deployed Army troops to escort them inside.

The news conference began a four-day slate of events commemorating the 60th anniversary of the Central High crisis. The events culminate Monday with an address by former President Bill Clinton in the school's auditorium during an event at which the eight will be present.

The remembrance comes at a time when racial discord nationally has flared after police shootings, white-nationalist rallies and debates over the removal of statues depicting Civil War veterans from the Confederacy.

"I think 60 years from now, the issues will be the same unless there is some drastic change," said Roberts, a consultant and psychologist who lives in California. "History doesn't promote that, though, as a realistic proposition."

Asked about whether recent national events echoed the Central High crisis, Trickey said she was emotionally "triggered" by footage from a white-nationalist rally last month in Charlottesville, Va.

"It felt exactly the same way," Trickey said. "That triggered me so much. Watching, sort of, the mindless mob action just touched me, and I thought, 'This is 60 years later. I don't want this. I can't believe this happened in this time.' Of course, I can believe it, because that's who we are, OK? As a society, our highest value is violence, and the second is segregation because we do those really well."

Little Rock, where the state took control of a shrinking public school district three years ago because of poor test scores, has grappled with how to properly commemorate the anniversary.

Events coordinated by the city, the city's tourism bureau and the National Park Service are organized under the theme "Reflections of Progress."

Sen. Joyce Elliott, D-Little Rock, meanwhile, is among organizers for Grassroots Arkansas, which has scheduled an alternative set of events under the theme "Sixty Years: Still Fighting."

Roberts said progress is the wrong word to use while many remain vulnerable to inequities.

"I would suggest we focus not so much on progress, because that's suggestive that something has happened in a progressive way," Roberts said. "I think all of the indicators suggest we have a very long way to go before we can even begin to use the word 'progress.' Now, I will admit that life for me today means that I'm less vulnerable than I was in 1957, but that's not true for everyone."

Beals, a journalist, said some celebration is warranted.

"I think that unless we stop and measure how far we've come today, we're not necessarily inspired to do the fighting that it's going to take this battle where it needs to go," Beals said. "I'm unwilling to not celebrate. I just want to understand, in the context of that celebration, we're not through yet."

Green, who worked for President Jimmy Carter as an assistant secretary of labor, said "education is not the only index" to gauge for fairness. He urged people to focus on unemployment and housing.

"When I was growing up, when I finished high school, Arkansas was a place that you left," Green said. "I think now there's recognition that, yeah, there's tremendous brain drain and talent that the state lost. Now is an opportunity to retain it and widen those opportunities. I think if you don't do that, you're going to continue to have people leaving to go to Dallas, LA, Chicago and to lose obvious talent here."

Trickey lamented what she called "profound intentional ignorance" in how people view national issues, such as climate change. "We have a responsibility to challenge everyone about [ignorance]," Trickey said.

Myron Jackson, one of the news conference's moderators, began the event by asking the eight what they would tell their younger selves, specifically asking if they would do things differently.

"I would probably behave the same way," Eckford said, adding that she is not as "naive" now as she was then. "Things change and things remain the same. What is different now is there is less indifference than what we faced. There's less indifference, and there are people actually who want to know what happened and why."

Eckford was the first black student who showed up to Central High on Sept. 4, 1957, when the National Guard turned her away.

Images that day of Eckford, holding books to her chest and wearing sunglasses while a white mob trailed behind, were distributed worldwide. She walked a block to a bus stop bench, where she sat, ignoring questions from journalists while her eyes welled with tears, she would later recall.

Beals said she would have given herself the assurance of safety.

"I would probably say, 'Melba, what you're doing is correct,'" Beals said. "'You will see your colleagues when you are 75.'"

Of the eight, only two -- Eckford and Wair -- live in Arkansas today. Trickey said she viewed the group's public appearance as an important opportunity.

"We hope that this causes some authentic discussion when we're not here," Trickey said. "If we are successful with what we do, you will be talking about us, or about the issues, for a long time. That's our goal, to catalyze discussion and thought." 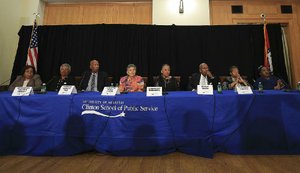 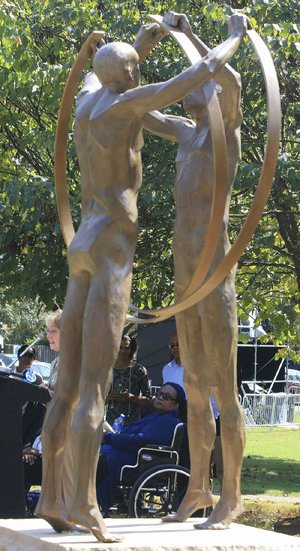