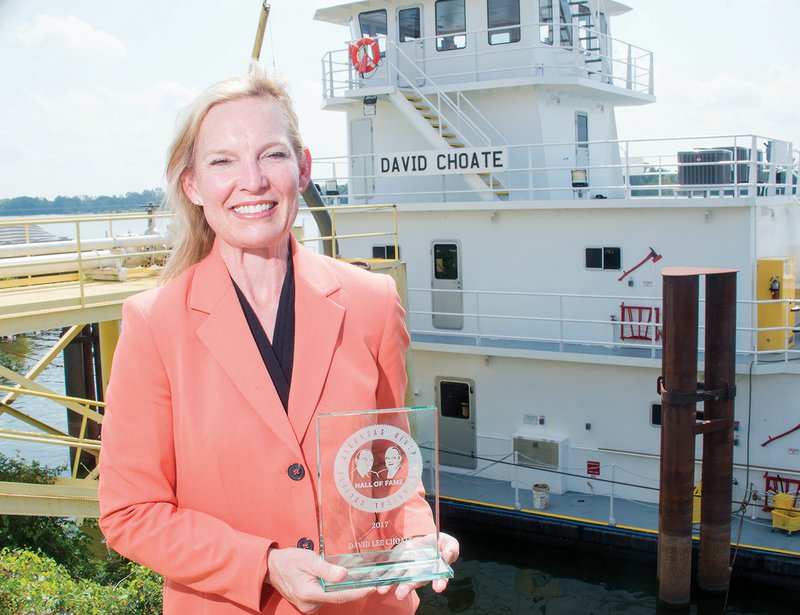 Penny Choate stands in front of the Arkansas River holding David Choate’s Arkansas River Hall of Fame award plaque. She described her husband, who died earlier this year after a long battle with brain cancer, as a caring person and a brilliant businessman.

SEARCY — David Choate was a dedicated father, stepfather, grandfather and husband. He was also very much dedicated to the Arkansas River.

Penny Choate of Searcy, David’s widow, described him as a caring person and a brilliant businessman.

“[He] always brought a wealth of common sense to the table in everything that he did,” she said. “He was confident, direct and deliberate in his efforts.”

Choate said her husband didn’t take on an obligation he couldn’t give 100 percent to and often worked from sunrise to nightfall in one way or another.

David served in the Arkansas House of Representatives for three terms, she said, and was appointed to a variety of commissions and state boards.

His contributions were significant, she said.

“He was appointed by the secretary of defense to the National Waterways Conference to work with the U.S. Army Corps of Engineers to advise Congress on matters of the inland waterways,” Choate said.

David was inducted into the Arkansas River Hall of Fame at the 2017 Arkansas Oklahoma Port Operators Association Board and Membership Meeting in Dardanelle on Sept. 8, she said.

Choate said the honor was bestowed upon her husband by the Arkansas River Historical Society.

Two other inductees, Gene Higginbotham and Paul Latture, both of Little Rock, were also honored at the meeting.

David died March 19, she said, after a long battle with brain cancer.

“David was so much to so many people, both personally and professionally,” Choate said.

Choate said she met David in Hot Springs, and they had been married for 15 years at the time of his death.

“I am so very proud. He would be so pleased, yet humbled, by this honor,” she said.

“The MKARNS provides significant economic benefits to the nation and has been designated as a Marine Highway (M-40); annually ships approximately

11.5 million tons of waterborne cargo with an estimated value of $4.3 billion; [and] is a multipurpose system providing other benefits to the region and nation, including flood control, hydroelectric-power generation, recreation, and environmental and ecological advantage,” Scott said.

“The Hall of Fame is a tribute to those who have contributed ‘outstanding service to the development of the Arkansas River, its basin and the McClellan-Kerr Arkansas River Navigation System,’” Scott said.

Scott shared David Choate’s nomination, written by J.O. Norman, vice president of Oakley Grain Inc., which states that Choate spent much of his life heavily involved with the grain and feed trade, as well as river traffic on the Arkansas River.

“During his tenure, the company became one of the largest privately owned companies in Arkansas and expanded both the grain and barge divisions by over fivefold,” the nomination states.

David Choate also served as president of the Mid-South Grain Association, according to the nomination, and was elected to the Arkansas House of Representatives to represent the areas of Lonoke and White counties.

He was appointed to a variety of Arkansas boards by three governors, including the state Board of Agriculture and the Early Childhood Commission, and he also served as chairman of the House Education Committee, the nomination states.

“David worked in the grain and barge business along the Arkansas River for just shy of 20 years. He made many lasting relationships with customers over all the inland waterways of the United States, but specifically on the Arkansas River, as that is where Oakley has its largest presence,” Norman said.

Norman said he was hired by David in 2006, and the two worked together up until David’s death in March.

David loved his job and co-workers, Norman said, and it was clear that he enjoyed every day he spent working at Oakley Grain Inc.

“The grain and barge industry as a whole has experienced major growth across the country over the past 10 years,” Norman said. “Oakley was very involved in that growth, specifically as it pertained to the Arkansas River. David, as the leader of our grain and barge division, was very important to our growth here.”

David mentored Norman and took the time to teach him about the business over the years, Norman said.

Norman said the MV David Choate, a 3400 horsepower boat, was put into service by Jantran, an owned subsidiary of Bruce Oakley Inc., in August.

The boat will be used primarily for pushing barges up and down the Arkansas River, he said, as Jantran is the primary tow-boat company that provides service on the river.

“When he spoke, people listened. [He was a] very dedicated family man to his wife, children and grandchildren,” Norman said of David.

Penny Choate said, “David was my best friend, business partner and the love of my life. Every day that I had with him was an absolute blessing.”