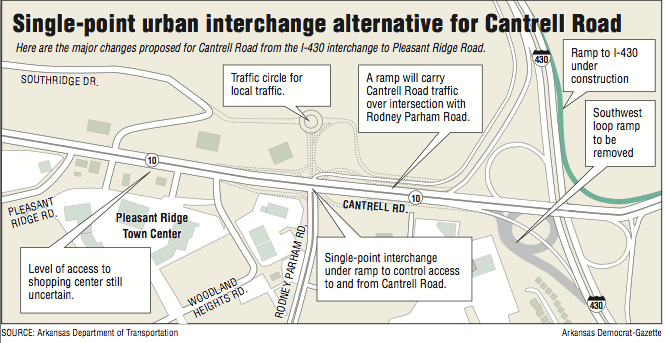 The Arkansas Department of Transportation has chosen a single-point urban interchange to improve traffic flow on a congested section of Cantrell Road in west Little Rock.

The design is the preferred alternative to a continuous-flow interchange, which was the other option the agency considered, because the department concluded it would handle traffic better, said Danny Straessle, a department spokesman.

"It has a more efficient movement of traffic," he said.

The announcement last week of a preferred alternative capped five years of study to improve traffic flow on that section of Cantrell, also called Arkansas 10, in response to surging traffic and increased development in the corridor, and came after the proposed alternatives attracted more than 100 written comments from a public meeting held in March.

Up to 54,000 vehicles travel every day on Cantrell between Pleasant Valley and Pleasant Ridge roads, making it the busiest arterial, or noninterstate roadway, in Arkansas. A study of the corridor projects 76,000 vehicles per day will use the corridor in 20 years.

Among those submitting comments were Lou Schickel of Schickel Development, which developed the Pleasant Ridge Town Center, a major shopping complex on Cantrell near I-430.

"The single point urban interchange alternative appears to be superior to the continuous flow intersection alternative," he said.

The department has been considering the continuous-flow design for the interchange since 2003 when a department study evaluated its use at five intersections in Arkansas, including Cantrell-North Rodney Parham.

That design would have removed left turns from the main intersection. For westbound traffic on Cantrell, that would mean motorists turning left onto Rodney Parham would make that turn several hundred feet before the intersection. That traffic, controlled by a light, would move into a segregated lane on the south side of Cantrell to another light at Rodney Parham, where the turn would be executed.

The "single point" in preferred design would be underneath Cantrell at North Rodney Parham. One traffic light would help control traffic coming onto or off Cantrell, which would allow motorists going east and west on Cantrell to not have to stop at a light to accommodate North Rodney Parham traffic as is done now, which leads to much of the congestion in the corridor.

Hugh and Amy Pollard, who live off River Mountain Road, which is on the north side of Cantrell and west of I-430, said that while the department's preferred alternative is "safer" for people who use the River Mountain Road to access Two Rivers Park and the Arkansas River Trail, they expressed worry it would encourage "commercial or multi-family development" and destroy the "natural beauty" of the entrance to the park.

They are particularly concerned about the construction of a traffic circle north of Cantrell that would handle low-volume traffic using Walton Heights neighborhood, River Mountain Road and a bank and church facing Cantrell.

The department plans to hold another public meeting to invite comment on the preferred alternative. It is scheduled to take place some time next year, but not before the agency hires a contractor to help design the project, invoking for the first time a new law that allows an alternate procurement method for highway projects.

Act 809 of 2017 allows the agency to select a pilot project for the construction manager/general contractor method to procure highway projects.

Typically, highway projects are designed and contractors are invited to submit bids. The lowest bidder is awarded a contract to build the project based on the design.

Enlisting a contractor before the project is fully designed helps "manage the risk" of project design, especially on projects as complicated as the Cantrell Road project, Straessle said.

"A contractor's perspective on what can be done and what can't be done" can be incorporated early in the design, he said.

The contractor that is selected also will have the "first shot" at bidding for the job, Straessle said.

The department has allotted $58.3 million to spend on the project in 2019, according to the agency's 2016-2020 statewide transportation improvement program, which lists the projects on which the department plans to advance. The money includes $46.64 million in federal funds and $11.66 million in state funds.

But Straessle said 2019 is "not set in stone" and the project might be awarded later rather than sooner.

Work to improve the interchange already has begun with the awarding of a $22.9 million contract to build a ramp from westbound Cantrell to I-430 north.

The project will eliminate the left-hand turn against eastbound traffic that westbound traffic now requires to access I-430 north. The project also provides for the installation of a traffic signal at Cantrell and Pleasant Valley Road.