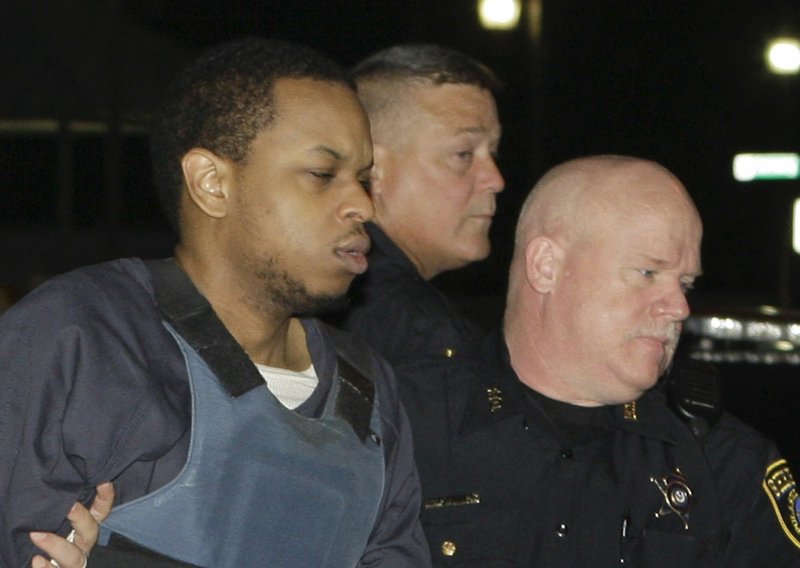 FILE — Abdulhakim Muhammad is escorted to the Pulaski County Courthouse in Little Rock, Ark., Friday, July 22, 2011, before the fifth day of his trial for the 2009 shooting death of a soldier and wounding of another outside a Little Rock recruiting center.

A federal judge began hearing testimony Monday on a state prisoner's contention that the Arkansas Department of Correction is violating his right to religious freedom by refusing to provide him a "halal diet" in accordance with his Muslim religion.

In Abdulhakim Muhammad's view, meats from herbivorous animals that are slaughtered in accordance with a specific ritual are halal. Muhammad, a Sunni Muslim formerly known at Curtis Bledsoe, says "halal" means permitted and "haram" means prohibited. He believes haram food includes pork, meat from carnivorous animals, meat from other animals not properly slaughtered, and any food carrying haram ingredients such as gelatin, alcohol, pepsin, monoglycerides and diglycerides, and other animal byproducts.

"Mr. Muhammad sincerely believes as a practicing Muslim he must consume a halal diet," according to his attorney, Jess Askew of Little Rock. Askew said that requires the daily eating of halal meats, which could be fish or other meats except for pork. He considers kosher meats, which meet the specific religious requirements for meat to be halal, to be an acceptable substitute.

The dietitian-developed meals the prison system provides three times a day for its 15,000 inmates in 21 units include a rotation of various meats as a daily protein source. Fish, in the form of tuna or mackerel, isn't an everyday choice, and the other meats aren't "halal certified."

Muhammad has been imprisoned since 2012 for the drive-by shooting of two soldiers, one fatally, outside a military recruiting station in Little Rock in 2009. He pleaded guilty to capital murder, attempted capital murder and 10 counts of unlawful discharge of a firearm from a vehicle. He is serving life without parole.

Kay Skillen, the Correction Department's food services administrator of 20 years, testified that the food being served in the rotation follows Administrative Directive 13-98, which was published Nov. 22, 2013. She said there are meal options available for medically or religiously qualified inmates. They include vegetarian meals; high-calorie, high-protein meals; low-carbohydrate meals; cardiovascular meals; and low-sodium meals. But she said no special foods are purchased to make those special meals; instead, the department's kitchens specially prepare the ingredients supplied by low-cost vendors.

For inmates who can't eat pork on the days it is offered, an alternative meat is provided, she said. She said the department also provides common fare, or meatless, meals for inmates who don't eat meat for religious reasons, and those meals are prepared in separate common fare kitchens to avoid contamination by other foods. She said they may not be kosher-certified, but she believes they are generally accepted as kosher.

Muhammad complained in a 2015 lawsuit that court decisions in 2002 and 2006 led the department to begin serving kosher food for inmates whose religions required it, but that it won't accommodate him in the same way.

From about 2002 until 2008, when an inmate whose litigation prompted the regular serving of kosher meals was transferred to another state, the department supplied two prepackaged kosher meals a day to inmates who requested a kosher diet, at cost of $5.45 per meal, Skillen said. The meals were called "My Own Meals" and were purchased to comply with a court order. Skillen testified that an attempt to reduce that cost led to the development of common-fare meals, which require separate kitchens and separate sets of pots and pans.

The prison system has about 1,700 Muslim inmates among the "dozens" of faiths represented in the prison population, according to testimony by Joshua Mayfield, administrator of chaplaincy services for the past three years. He said the department offers special accommodations for Muslim inmates, such as making a prayer service available every Friday, allowing them to participate in Ramadan and even providing a full-time chaplain who is Muslim.

Virtually all Muslim inmates are on a pork-free diet, Mayfield said, noting that those with additional needs are often placed on the common fare diet. He said he believes that the halal diet Muhammad requests is available through the prison's current offerings, and that he hasn't requested any specific purchases of halal food.

He testified that there are "several definitions of halal" and that while pork-free diets don't satisfy every definition, "there are many other Muslim inmates for whom it does."

When a U.S. Supreme Court ruling in 2015 forced the prison to allow prisoners with certain religious requirements to have long hair or beards, more than 6,000 inmates -- or more than a third of the state's inmate population -- requested the waiver, Mayfield said. Although more than 2,000 were granted the request, it took the chaplains more than 40 hours collectively to assess the requests, he said, emphasizing the burdens that special requests place on the system.

Department Director Wendy Kelley testified Monday that the common fare diet was implemented because "the variety of religious diets that were coming through were becoming unmanageable."

She noted that on forms inmates fill out to request certain diets, such as vegetarian diets, they cannot list which specific foods they want to eat -- only those they can't eat. This prevents them from demanding expensive foods such as lobster, she said.

In Muhammad's case, she said, "his request has changed multiple times."

But if his request is what she heard him testify to Monday, she said, citing his suggestion that a serving of fish simply be added to an otherwise vegetarian diet, "We could meet that," she said. But she said she had previously understood his request to be that "he must have meat, and it must be halal meat," every day.

"We have to provide what the nutritionist says is a balanced diet," Kelley testified.