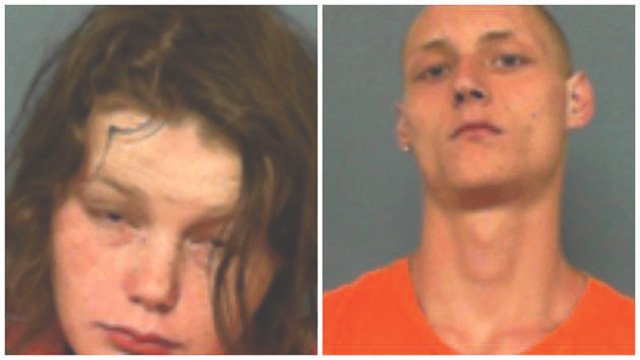 A Magnolia couple whose 2-week-old daughter suffered nearly 100 rat bites over her 5-pound body are fit to stand trial in the felony case against them despite their mental diseases and reportedly violent childhoods that included rape and physical abuse, according to the forensic evaluation released Tuesday afternoon.

The case against Erica Shryock, 19, and Charles Elliott, 18, on accusations of permitting abuse of a minor and first-degree endangering the welfare of a minor was put on hold in July until the psychological evaluations could be conducted.

The couple awoke May 14 to find their 15-day-old daughter covered in blood and dozens of rat bites on her arms, hands, face and fingers. A 1-inch wound on her forehead where her skull was visible required extensive reconstructive surgery.

Both told the mental-health professional that they had been dropped off a week earlier by police at a ramshackle house on Cordelia Street where a friend lived. Investigators found an infant head covering "soaked in blood" on the floor and a blood-soaked blanket at the 880-square-foot home, which has since been razed by the city.

Dr. Karen Farst of Arkansas Children's Hospital in Little Rock said that in her opinion the parents were either absent or incapacitated not to have been awakened by the baby's screams and crying, according to the arrest affidavit.

Elliott has poly-substance use disorder, other specified trauma-related disorder, antisocial personality disorder and unspecified bipolar disorder, according to the report. He has been hospitalized numerous times since he was 8 because of his mental issues and "cutting and/or threatening to kill himself." In the past year before he was arrested, he was hospitalized for trying to hang himself.

Shryock has major depressive disorder, poly-substance use disorder and borderline intellectual functioning. She first received mental help at the age of 7 after her stepfather had a heart attack and died in front of her. At 16, she was sent to Rivendell Behavioral Health hospital in Benton for cutting and hitting herself.

Neither's mental diseases keep them from understanding the proceedings against them or assisting in their own defense, the report stated.

"I was told I was mentally like ... unstable," Shryock is quoted as saying in the report. "I don't really understand the reason why I got arrested. Because I thought I did the right thing, but I guess I didn't."

Both dropped out of school in the ninth grade and do not have General Educational Development diplomas. Shryock said in the report that she had been told that she has a second-grade English comprehension.

Elliott said in the report that his father raped him and his little sister during his childhood and forced him to "do drugs and made to do sexual things to his sister. He was angry and spent time in the juvenile detention center and at the South Arkansas Youth Services for "fighting or lashing out at people."

According to the report, Shryock, who said she is "half deaf and half blind," was taken into foster care as a child after a knot was found on her head. She told the evaluator that her mother physically abused her and that her brother molested her when she was 5 years old. She grew up in poverty, living in shelters and condemned houses, according to the report.

Shryock spent time in Youth Services centers for truancy and was suspended from school numerous times for "trying to trip another student," smoking in the bathroom and punching a wall, according to the report.

The evaluator reported that Shryock and Elliott were suspected of malingering -- faking -- during the evaluation because both reported "numerous mental illnesses and dysfunctions that could be used to benefit" their cases.

"Furthermore, she and her co-defendant reported almost identical mental disorders, which made both accounts of their illness questionable," the report read.

Both have been on suicide watch since their arrests.