Wal-Mart adding to its line of private-label baby items 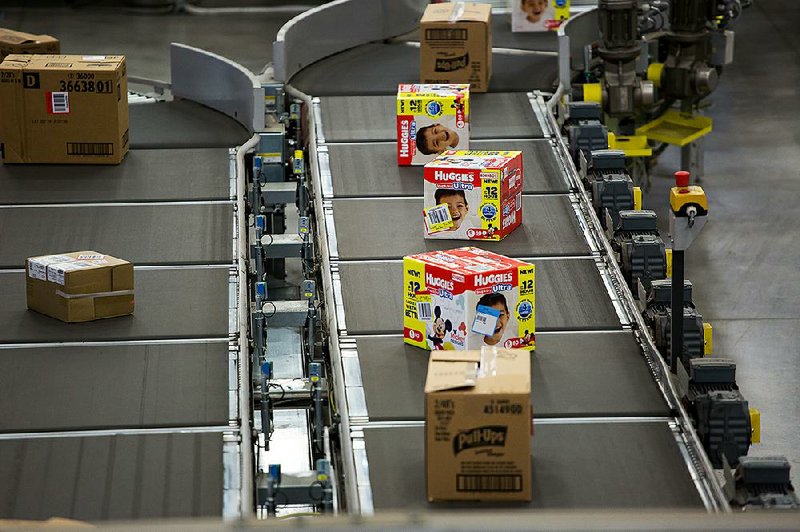 Packages of Huggies brand diapers move along a conveyor belt at a Wal-Mart warehouse for online orders in Bethlehem, Pa., earlier this year. Wal-Mart said Wednesday that it plans to expand its Parent’s Choice brand of baby products.

Wal-Mart Stores Inc. is expanding and enhancing its line of private-label baby products to lure customers away from competitors such as Target Corp. and Amazon.com.

The Bentonville-based retailer revealed Wednesday plans to beef up its Parent's Choice brand by introducing about 120 products. In addition to the new products, Wal-Mart said it has upgraded about 100 other items. The retailer's full line of Parent's Choice baby products will consist of about 275 items when the rollout is completed by January.

"As parents ourselves, we know what products are needed most, and we've raised the bar on quality for these Parent's Choice items and more," Marshall said.

Wal-Mart has developed a premium diaper, as well, which the company said in its news release is softer and more absorbent than others. Marshall said later in an email that employees tested the new diapers on their own children during the developmental process. The diapers will be available in stores and on Walmart.com along with the other items.

The revamped baby-product line was a project that spanned three or four years, according to Marshall, and is part of Wal-Mart's broader strategy to improve the quality and selection of its private-label offerings.

The company has devoted more resources to expanding and improving brands like Great Value and Sam's Choice over the past couple of years. Chief Executive Officer Doug McMillon said earlier this year that Wal-Mart had "some pretty big opportunities" to create product-driven loyalty through its private brands.

Brian Yarbrough, a retail analyst with Edward Jones, said differentiating itself from competitors is one of the key reasons private-label offerings are so important for retailers like Wal-Mart. Private-label products help drive store traffic.

Other competitors such as German discount grocery chains Aldi and Lidl have also put pressure on retailers like Wal-Mart to sharpen their private-label offerings. Both companies rely heavily on private-label products in their stores, which offer lower-price alternatives to costlier brands. Private labels also produce better profit margins for retailers.

Yarbrough said data regarding several food-related products indicate that private labels are gaining market share and serve as a sign that consumers are no longer as loyal to brands.

"I've always said private label is important," Yarbrough said. "But in this day and age, with the world of Amazon and pricing being so competitive, it makes it even more important."

Carol Spieckerman, a retail consultant and president of Spieckerman Retail, said the multibillion-dollar baby business represents a huge opportunity for Wal-Mart so it makes sense for the retailer to "explore just how much better it could be" with its Parent's Choice offerings.

Spieckerman said Wal-Mart's baby-product expansion comes at an interesting time because Amazon has started several private brands in multiple categories, and Target has recently revamped its private-brand selection. Target's Cat & Jack children's clothing line reached $2 billion in sales in its first year, and its Cloud Island baby product brand has been successful since its introduction in May.

"Clearly, Wal-Mart is intent upon turning Parent's Choice into a full-assortment baby essentials brand rather than continuing with it as a spotty fill-in proposition," Spieckerman said.

"Doing so will bring many benefits, including creating a more impactful and consistent visual presence both within Wal-Mart's stores and online. Visual impact alone sends a powerful message that will encourage multiple-item purchases. Upping the quality quotient will allow Wal-Mart to compete favorably and profitably against better national brands."