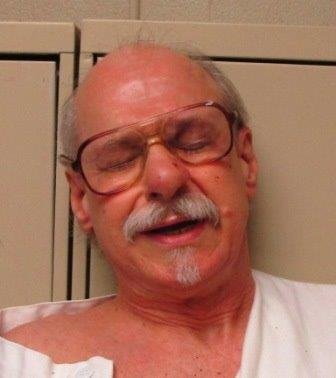 In an attempt to stop his pending execution, lawyers for inmate Jack Greene on Thursday filed more than 100 pages of records that they say paint the picture of a delusional man who is unfit for the death penalty.

In addition to his bid in Jefferson County Circuit Court to be declared incompetent, Greene also will seek clemency from the governor, the state prisons department said Thursday.

Greene, convicted of killing a retired minister, is scheduled to die Nov. 9. His attorneys from the federal public defender's office in Little Rock say Greene has a "psychotic disorder" after spending more than a decade locked behind a solid metal door in a one-man cell.

Greene's disorder causes him to stuff tissues in his nose and ears to the point where he bleeds, according to a complaint brief filed Thursday. He also frequently stands on his head to numb a sense of pain. Greene lashes out at his attorneys, they wrote, and accuses them of being involved in a conspiracy against him.

Greene's IQ has been measured at 76, or "within the range for intellectual disability," his attorneys wrote.

Because the U.S. Supreme Court has ruled prisoners are unfit to be executed if they cannot comprehend their own death sentence or the reason for it, Greene's attorneys are asking the Jefferson County Circuit Court to order an independent evaluation to determine Greene's competency.

The complaint filed against Department of Correction Director Wendy Kelley also charges that the prison system's existing method for gauging a death row inmate's mental fitness falls short of the U.S. Supreme Court's standards for a "fair hearing" and is unconstitutional.

Attorney General Leslie Rutledge's office is representing the prisons department. A spokesman for Rutledge said Thursday that she is reviewing the complaint.

"The family of the victims deserve closure and the Attorney General will continue to work on their behalf to see that justice is done," said the spokesman, Judd Deere, in a text.

Greene, 62, is the oldest prisoner on Arkansas' death row at the Varner SuperMax Prison. He was convicted in 1992 of killing Sidney Burnett inside his Johnson County home the year before.

According to court records, Burnett and his wife, Edna, had for a time hired and housed Greene. In 1991, three days after Greene had fled North Carolina after killing his brother, he returned to the Burnetts' house and killed Sidney Burnett. When he was arrested in Oklahoma, he was driving Sydney Burnett's pickup.

Under an agreement signed with then-Gov. Bill Clinton, North Carolina extradited Greene to Arkansas on the condition that he be returned if given any sentence other than death. Greene's life sentence for killing his brother was later thrown out because a North Carolina judge declined to hire an outside psychiatrist to evaluate him.

The extradition agreement with North Carolina "would prove to be an unshakable fixation of Greene's," wrote John C. Williams, one of his public defenders, in the complaint filed Thursday. Greene believes that his attorneys are conspiring to keep him from being extradited to North Carolina, where he believes he will get better medical treatment, the complaint states.

Williams and Greene's other attorneys attached years of records documenting his mental illness, childhood and writings to prison officials.

According to the complaint, Greene eats his meals from the sink in his cell after tossing the food from his tray, which he returns immediately to guards because he believes their repeated opening of the slot in his door is causing him hearing loss and concussions.

"Mr. Greene is a severely mentally ill man -- exactly the kind of person our laws prohibit from execution," said another of Greene's federal public defenders, Scott Braden, in a press release. "Decency requires that, at the very least, Arkansas must hold a hearing, with a neutral decision-maker, to examine Mr. Greene's competency to be executed."

Another death row inmate, Bruce Earl Ward, claimed to be mentally incompetent ahead of his scheduled execution in April. The state Supreme Court stayed his execution on related grounds. His case is ongoing.

A separate clemency hearing for Greene is set for Wednesday at the Varner prison. Few condemned prisoners in Arkansas are granted such a reprieve.

Prior to the state's plans to execute eight men in April, six sought clemency. Only one bid was viewed favorably by the Parole Board and later approved by Gov. Asa Hutchinson. Four men were executed.

Also Thursday, the Arkansas Supreme Court agreed to speed up its consideration of a case in which a Little Rock attorney is seeking records about the state's execution drugs. The justices on Wednesday stayed an order from a lower court to produce the records this week, but they then issued a new schedule that would allow them to decide the issue before Greene's execution.