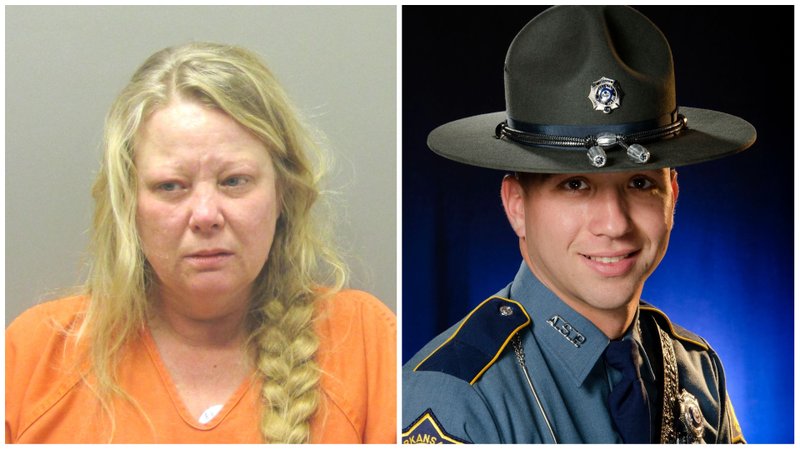 An Arkansas State Police trooper was reported to be in stable condition Monday morning after being shot during a traffic stop on Sunday night.

Trooper Kyle Sheldon suffered a gunshot wound not believed to be life-threatening during a traffic stop shortly before 8:45 p.m. on U.S. 270 near Interstate 30 in Rockport in Hot Spring County, state police said in a statement.

Police said Sheldon asked the driver — identified by authorities as Elsbeth Tresa Kittinger, 49, of Fort Worth, Texas — to step out of her Dodge pickup, at which point she opened fire.

Officers with the Malvern Police Department, who were nearby, "returned gunfire at the suspect" as she drove off, the statement said.

"Local law enforcement officers fired a second time at the suspect as she fled onto Doyle Jones Road about five miles away from the traffic stop and first shooting scene," state police wrote.

Kittinger was treated and released for a gunshot wound before being booked into the Garland County jail.

A case file will be submitted to the county prosecutor later Monday before formal charges are filed, police said.

Details were sparse Sunday night on an officer-involved shooting confirmed by an Arkansas State Police spokesman.

Sadler indicated that an officer was hurt in the incident, and said the wound to the officer is not believed to be life-threatening as of Sunday night. He declined to comment when asked to specify whether or not the officer was shot.

He did not provide any further information on the incident, saying the agency had no plans to issue a news release Sunday night. It was also unclear Sunday night when the officer-involved shooting took place.

Sadler said more details would be made public Monday.