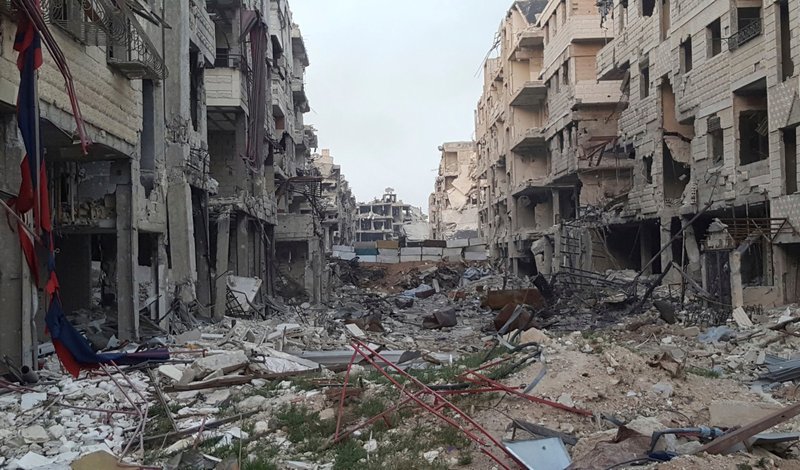 FILE - This Monday, March. 26, 2018 file photo provided by Danny Makki, a British-born Syrian journalist, which has been verified and is consistent with other AP reporting, shows a view of damaged buildings due to fighting and Syrian government airstrikes in the town of Harasta, in eastern Ghouta region east of Damascus, Syria. The Syrian army declared victory in eastern Ghouta Saturday, March 31, 2018, after opposition fighters evacuated from most of the area near the capital except for the town of Douma where negotiations are still underway for rebels there to leave or face an all-out government offensive. (Danny Makki via AP)

The Syrian army declared victory in eastern Ghouta on Saturday after opposition fighters evacuated from most of the area near the capital except for the town of Douma, where negotiations are still underway for rebels there to leave or face an all-out government offensive.

The government gave rebels in Douma -- the area's largest town and stronghold of the Army of Islam rebel group -- an ultimatum to agree on leaving by late Saturday. Some pro-government websites reported that the army was massing troops around Douma, adding that the ultimatum may be extended until today.

The army statement came shortly after another group of opposition fighters and their relatives left southern and western parts of eastern Ghouta on Saturday afternoon, taking President Bashar Assad's forces a step closer to eliminating threats from insurgent groups nearby.

State TV said 38 buses left the towns of Zamalka, Ein Tarma, Arbeen and Jobar taking more than 1,700 rebels and civilians to the northwestern rebel-held province of Idlib. The channel said troops entered the towns and raised the national flag in Arbeen's main square.

"The importance of this victory lies in restoring security and stability to the city of Damascus and its surrounding areas after the suffering of its civilians from the crimes of terrorists over several years," said the army statement, read on TV by Brig. Gen. Ali Mayhoub.

The retaking of most of eastern Ghouta reopens a major network of roads and highways that link Damascus with other parts of the country, which have been closed since 2012 when rebels captured eastern suburbs of the capital.

The army statement vowed "to wipe out terrorism and bring back stability and security to all parts of Syria."

A crushing government offensive under the cover of Russian airstrikes that began Feb. 18 has forced opposition fighters in most of eastern Ghouta to agree to evacuate and head to Idlib province.

"Arbeen, Zamalka, Jobar and Ein Tarma in eastern Ghouta are free of terrorists," shouted a correspondent for state-affiliated al-Ikhbariya TV channel from Arbeen.

The state-run Syrian Arab News Agency said 38,000 fighters and civilians had headed to Idlib over the past two weeks, marking one of the largest displacements since Syria's conflict began seven years ago. More than 100,000 others headed to government-controlled areas over the past weeks.

Before the latest wave of violence began in eastern Ghouta, the U.N. had estimated that some 393,000 people were living in the area under a tight government siege.

Tens of thousands of rebels and civilians have been relocated to Idlib over the past years from different parts of Syria, making it one of the most inhabited regions in the country.

The Britain-based Syrian Observatory for Human Rights reported that a vehicle carrying evacuees from eastern Ghouta had a road accident in the government-held village of Nahr al-Bared, leaving five fighters and three civilians dead. It said the bus had left eastern Ghouta on Friday night.

The departure Saturday from southern and western parts of eastern Ghouta comes as negotiations are still ongoing between Russian mediators and officials from the Army of Islam to evacuate Douma, but no deal has been reached so far with the rebel group, which insists on staying in the town.

Army of Islam officials did not respond to requests for comment by The Associated Press.

Rami Abdurrahman, who heads the Observatory, said negotiations are now suggesting that thousands of Army of Islam members and their relatives could head to the northern town of Jarablous, which is controlled by Turkish troops and Turkey-backed opposition fighters.

The Observatory also reported that Syrian troops have been massing around Douma in case negotiations collapse.

Information for this article was contributed by Albert Aji of The Associated Press.