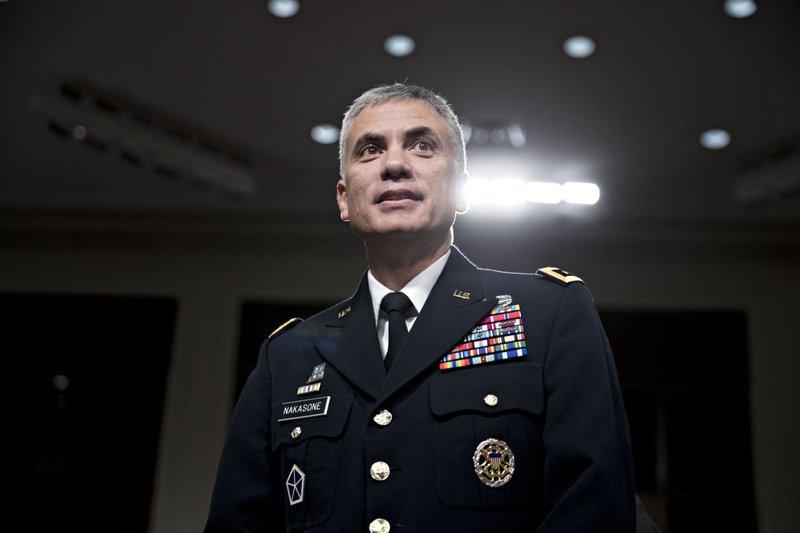 Army Lt. Gen. Paul Nakasone, expected to become the next head of the National Security Agency and U.S. Cyber Command, at a Senate Armed Services Committee confirmation hearing on March 1.

WASHINGTON -- The next head of the National Security Agency and U.S. Cyber Command will be taking charge in the face of what intelligence officials call the greatest strategic threat to the United States: Russia's efforts to disrupt U.S. elections.

Lt. Gen. Paul Nakasone, who is widely expected to be confirmed this month, also will confront Russia's aggressive targeting of the U.S. electrical grid and other critical infrastructure, and if directed would be responsible for providing the president and defense secretary options to counter such provocations.

Nakasone will face a host of challenges leading two agencies on the front line of this new Cold War. The NSA has been shaken by several major breaches, a steady loss of technical talent and a reorganization. CyberCom, now eight years old, has struggled to gel as a mature organization able to offer effective options for countering cyberthreats.

Nakasone, 54, cruised through two confirmation hearings, during which he said that, when it comes to Russia's campaign against the United States, "the most important thing is we want the behavior to change."

Nakasone, currently the commanding general of Army Cyber Command, said, "We want them to pay a price."

In that, he is concurring with Adm. Michael S. Rogers, who is set to retire this month as the head of NSA and CyberCom, and who has testified that so far the United States' actions to punish Russia for its interference in the 2016 election have not changed its behavior.

Appearing before the Senate Armed Services Committee in March, Nakasone was asked whether CyberCom, an organization he helped launch, had options to strike back against U.S. adversaries, including Russia. He said he knew that offensive plans "have been developed" and that, if confirmed, this would be one of "the early areas that I would look into."

When pressed by Sen. Dan Sullivan, R-Alaska, Nakasone allowed that America's adversaries in cyberspace "don't fear us" because they "do not think that much will happen to them" as a consequence for their malfeasance. Asked if that was good, the general replied, "It is not good, senator."

Beyond Russia, the NSA and CyberCom keep close watch on Iran and North Korea, from which numerous cyberattacks have originated. Colleagues, citing Nakasone's reputation for creative thinking, say the general is well-suited for such an important task.

"He's a smart, assertive leader," said Kevin McLaughlin, CyberCom's former deputy commander, who worked with Nakasone when he led its National Mission Force, whose task is to guard the nation against cyberattacks.

"He'll need to propose innovative ways to defend the United States in collaboration with other elements of the government and with the private sector," McLaughlin said. "I am confident Paul can do that."

Nakasone, commissioned in the Army more than 30 years ago, comes to the job with a healthy grasp of cyber operations and signals intelligence -- the sensitive work, performed by the NSA, of collecting and analyzing electronic communications overseas.

At CyberCom, Nakasone "was the most effective general officer in getting his organizations to develop real capabilities," said Rosenbach, who was chief of staff to Defense Secretary Ashton Carter in the Barack Obama administration. "That was something that was a weak spot of CyberCom and still is one of the things that they need to develop."