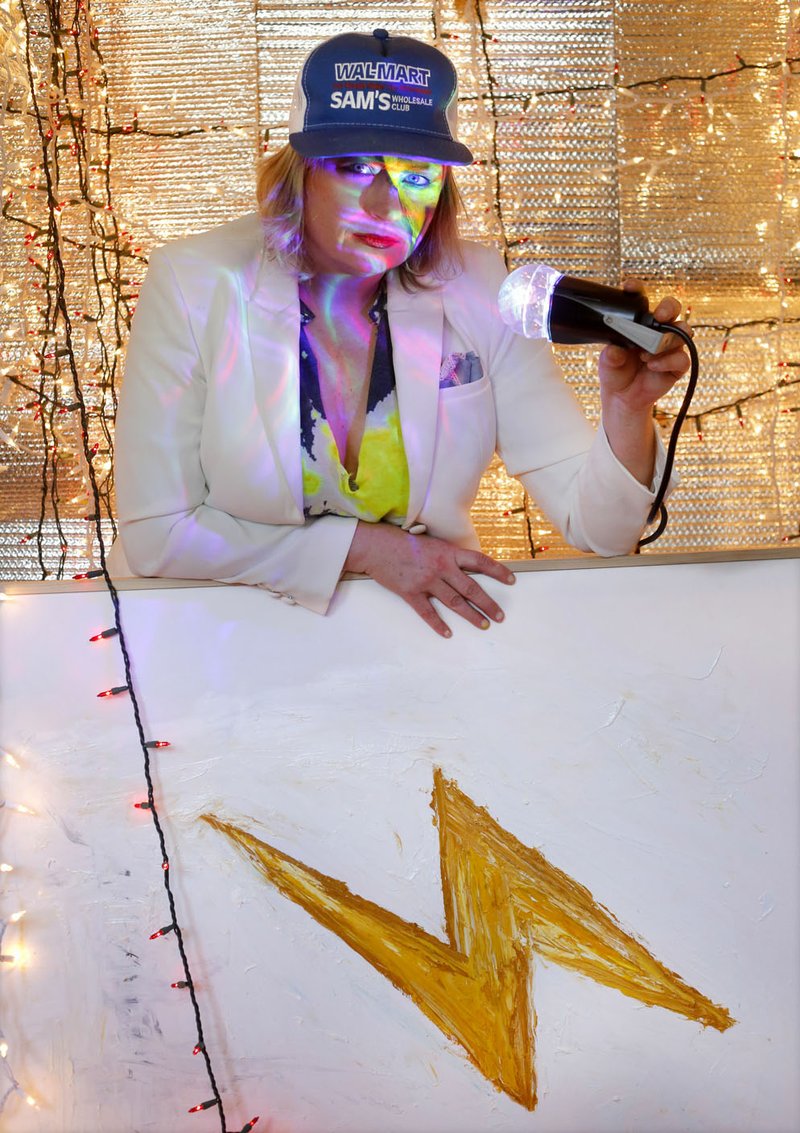 NWA Democrat-Gazette/DAVID GOTTSCHALK Kat Wilson poses in her studio with a piece from her recent series, "Emojis."

You must drink your morning coffee to have a conversation with Kat Wilson. The celebrated visual artist is perpetually firing on all pistons, and her ideas -- which come fast and furious -- are fantastical and complex.

Take her project for the "Inverse Performance Art Festival," held in Northwest Arkansas from April 12-15. Wilson plans to shoot a live pilot -- with a studio audience -- for what she hopes will ultimately be a series called "The All-Inclusive Show: A Show for Artists, But You Can Watch, Too." The show promises to be Wilson's take on the post-prime time talk show, if that talk show was populated with a horde of talented, cutting-edge artists. The filming will begin at 8 p.m. April 13 at the Meteor Guitar Gallery in Bentonville.

What: “The All-Inclusive Show: A Show for Artists But You Can Watch Too” at the Inverse Art Festival

"I've been thinking about it for a long time, but I never had a purpose for doing it," said Wilson, clearly excited about the concept. "When the Inverse Festival came along, I thought, 'This is a way for this to really happen!' I wrote the application for that. I warned everyone that I put their name in the application as participants. Then when I got in, I said, 'Oh, sorry! But don't worry. You're going to be great in it.'"

Wilson plans to use Northwest Arkansas artists for the segments of the show: Her wife Emily Lawson, for example, will show viewers how to make a drink that "is legal, but psychotropic legal -- using Absinthe, for example."

Chef Jason Paul, formerly of Bentonville's Heirloom restaraunt and now instructor at Brightwater: A Center for the Study of Food, will demonstrate how to make a snack that will "kind of open up your creative waves. And another section is going to be spiritual advice, how to open up your spiritual creativity," Wilson said.

"Everyone is coming together and is totally into it and psyched about it," she continued. "The audience will be artists, as well, so these are people that are getting together for art and artists. Sharing private lives are important. People are intrigued by art."

Wilson said she also hopes to include local activists for a segment, and, if the show moves on to a series, she would like to include visiting artists.

"One of my big things is that artists deserve to make a living, like anyone else," said Wilson. "I feel like I could commission other artists for work if the show really launched. I care about employing the artists that are coming to Northwest Arkansas."

Making a living as an artist -- something that is notoriously difficult -- is an area where Wilson has always distinguished herself. Immediately after earning her bachelor of fine arts degree in studio art from the University of Central Arkansas in Conway, she went to work as a commercial photographer in a career that included freelancing for the Washington Post, working as a staff photographer for the Arkansas Democrat-Gazette, teaching at the Arkansas Arts Center in Little Rock and working as staff photographer for the University of Arkansas at Fort Smith.

"They made me shoot everything, so my camera became an extension of my arm," she said. "I feel like a ninja. Everyone says, 'Oh, you're so fast!'

She started applying for graduate schools and ended up at the University of Arkansas, where she made waves even before she graduated -- her "Habitats" photographic series was accepted for display at the prestigious and exclusive Delta art exhibition at the Arkansas Arts Center. The Habitat Series is portraits of people -- sometimes individuals, sometimes couples, sometimes families -- in their homes, studios or offices, surrounded by their belongings or the tools of their trade. The portraits are a fascinating party for the eyes, with enough detail to keep the viewer glued to the scene for long moments. You feel as though you know these people instantly, something Wilson said is deliberate.

"I read that the average time a person spends with art on the wall is mere seconds, and I wanted to break that and have people spend some time to figure these people out," she said. "So I gave the viewer all the evidence to do that."

The lighting in the pieces is soft and moody and inspired by a master painter.

"Caravaggio is a pioneer of the Italian Baroque style that grew out of the Mannerism era," Wilson said. "I mimic his chiaroscuro lighting."

The series was widely lauded and received national attention. Wilson followed it up with her innovative "Layers" series, another successful project in which she layered dozens of different photographic images of the same subject, from different angles -- resulting in a dreamy, painting-like finish. Realizing that national prominence would be easier if she were in a larger urban environment, Wilson considered relocating to Los Angeles or New York -- she even gave LA a try for a brief period -- but when she met Emily, she knew she would be staying in Northwest Arkansas.

"I was about to leave, but I put my guard down, and my wife gave me a look," Wilson said with a laugh. "Five years later, I'm still here."

And Wilson is determined to do what she can to help other artists to make a living with their art, too. "The All-Inclusive Show" is but one example -- another is the nonprofit agency she started with her friend Sarah Leflar in 2013 called Bottle Rocket Gallery. The two raised enough funds through a Kickstarter to provide a stipend and traveling expenses to three nationally known artists to exhibit their work in Fayetteville, as well as speak at events at the University of Arkansas.

"The whole idea was to bring in different artists to our area to influence us," said Wilson. "I want to bring it back, as a residency. We need this. I want them to hang out with us, give them a show."

With Wilson's sense of motivation and innovation, it's likely she'll have that project up and running within a year. Take her latest show, "Emojis." The series includes out-sized, stylized painted emojis that are splashy with color. She had the idea for this latest series three weeks before she opened the show in her Fayetteville studio.

"The paintings were still wet when I opened," she said with a smile.

The ability to organize and publicize an event in such a short amount of time is a credit to Wilson's marketing abilities -- something she's put to use for nearly two years in her position as social media director for the company Thrive by Ernest R. Coleman. 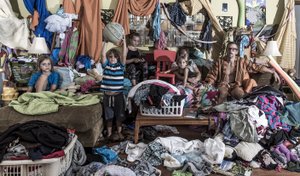 Artwork by Kat Wilson: The Edwards Family of Bella Vista, from her "Habitats" series. 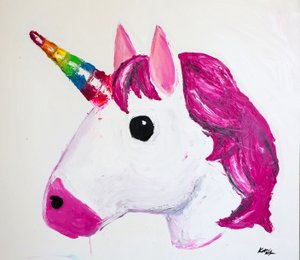 Artwork by Kat Wilson: Unicorn Emoji from her "Emojis" series.

"Emily, said to me, 'Well, Kat, why don't you promote yourself like you do everyone else?'" Wilson said. "So I said, 'OK, I'm going to do for myself what I do for everyone else,' and it worked out pretty well.'"

Wilson gave away sleek gift bags that included samples of her art. She put photos from the show on Instagram and Facebook, posting periodically to announce price reductions. This savvy pricing strategy, coupled with the active social media updates, helped (nearly) sell out the show. Wilson demonstrated that her keen marketing acumen, turned on herself, was going to be very, very good for her art.

She has big ideas for the future: In addition to the television pilot, she's contemplating her next show, perhaps a series based on fertility totems. She's got a great idea for an indie movie, too. In working on getting Bottle Rocket back in action, she hopes to help create an economy that can support fellow artists. With Crystal Bridges of American Art in Bentonville and the expansion of the University of Arkansas' school of art, she sees the Northwest Arkansas arts scene exploding. She wants there to be enough work to support that explosion.

One thing is for certain: The brain that is inside Kat Wilson's creative head never stops clicking along.