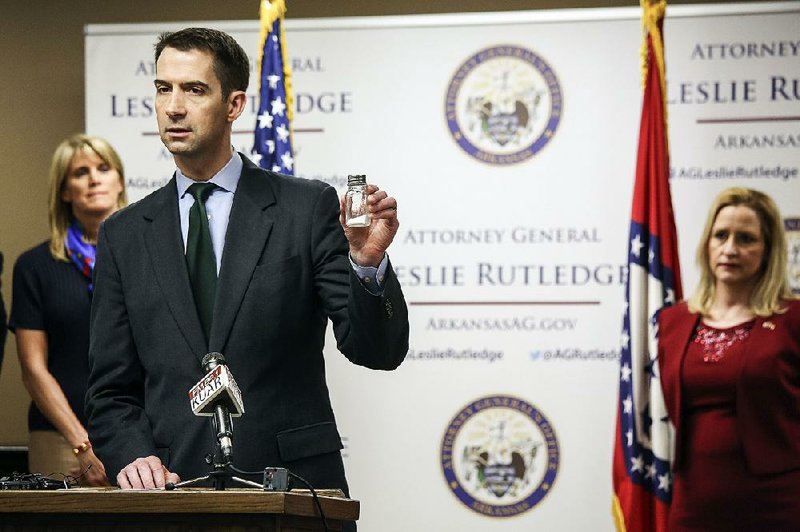 Echoing a recent call by President Donald Trump, both U.S. Sen. Tom Cotton and Arkansas Attorney General Leslie Rutledge said Wednesday that they were open to the idea of executing drug dealers as a method of combating the opioid crisis.

Specifically, the comments from the two Republicans were aimed at pushers of fentanyl, an especially cheap and lethal synthetic opioid that has been linked to a rising number of overdoses. A Tuesday news conference at the attorney general's Little Rock offices highlighted a bill Cotton has proposed to increase the federal minimum sentences for possession of fentanyl.

Asked if he supported the president's idea to use the highest form of punishment on drug dealers, Cotton was unequivocal.

"I support the death penalty for people who are dealing in fentanyl," Cotton said. "They're imposing a death sentence on the young men and women in our societies."

According to the National Institute on Drug Abuse, there were 169 opioid-related overdose deaths in Arkansas in 2016. The Centers for Disease Control and Prevention says that at least 800 people died from 2013-2016 in the state.

While Cotton's legislation doesn't include an expansion of the federal death penalty, he said U.S district attorneys should be allowed to more aggressively seek that punishment for drug dealers under an existing federal law known as the Kingpin Statute, as well as through laws allowing prosecutors to seek the death penalty for slayings connected to drug crimes.

No one has been given a federal death sentence for drug-related crimes that did not also involve killing since the punishment was restored in 1988, according to the Death Penalty Information Center. In a memo sent to U.S. attorneys last month, U.S. Attorney General Jeff Sessions urged the prosecutors to pursue the death penalty in certain cases, including against criminals "dealing in extremely large quantities of drugs."

Under current Arkansas law, the death penalty is allowed only as a punishment for capital murder and treason.

Rutledge said Tuesday that she would consider supporting a change allowing Arkansas prosecutors to seek death for traffickers.

"The sort of potency that we've heard about today and that we heard about on a regular basis with regard to fentanyl, deserve to have an equally potent penalty to go along with it," Rutledge said. "That's something I would entertain visiting with our legislators about."

Flanking Cotton and Rutledge at the news conference were state law enforcement and health officials, as well as parents of Arkansas children who died of overdoses. Afterward, the parents spoke highly of the responses put forward by officials, including Cotton's push for harsher punishments and Rutledge's recent lawsuit against three pharmaceutical manufacturers of opioids.

However, any push to expand the death penalty in Arkansas is likely to face a torrent of public criticism, even if most Arkansans support the punishment. The state is one year removed from the international headlines it sparked in attempts to execute eight inmates over a two-week period. The state executed four.

In an email, Rita Sklar, the executive director of the American Civil Liberties Union of Arkansas, called the statements by Rutledge and Cotton "barbaric."

"The death penalty is a broken process that needs to be abolished, not expanded -- and the Supreme Court has repeatedly rejected the use of the death penalty in cases where there has been no murder by the convicted individual," Sklar said.

Furdona Brasfield, the director of the Arkansas Coalition to Abolish the Death Penalty, said the proposal was "very sad," and would likely lead to more poor people and members of minority groups being given the harshest sentences, rather than the pharmaceutical executives who make and market opioids.

A spokesman for the state prison system declined to comment on the possibility of carrying out lethal injections for drug dealers.

In a statement, Gov. Asa Hutchinson said he would have to see the specifics of a plan, while noting that "generally, the death penalty should be reserved for the most violent and heinous offenses."

For one victim of the opioid crisis, the worst possible punishment did not seem excessive for proven "mass distributors."

Last June in Fayetteville, Gina Allgaier's son Tristan Thomas died of a fentanyl overdose at the age of 21. After attending the University of Arkansas, Fayetteville his freshman year, she said, he moved to Seattle, where his addiction "spiraled," before he returned to Arkansas.

After her son's death, Allgaier started the advocacy group in Bentonville, Speakup About the Drugs. She and another parent involved in the group, Andy Agar of Little Rock, attended the news conference Wednesday. In addition to tougher penalties, the pair said, there is a need for resources for more treatment, psychiatrists and patient beds.

Cotton, in his talk, agreed, saying, "People who are genuinely addicted to drugs, who made a wrong turn in life, who are not out there dealing on the streets poisoning their own communities, we should get them care and we should not lock them up."

But Dr. J. Carlos Roman, a pain-management specialist who serves on the Arkansas Medical Marijuana Commission and has been outspoken on the opioid crisis, said focusing on tougher punishments for dealers is the wrong track to take.

"They're missing the main part of the problem," Roman said.

Resources would be better spent on helping people get medical treatment, he said, rather than tracking down criminals. Squeezing the black market by locking up dealers would only force addicts to go to more drastic measures to get a fix, he added.

Roman, who was appointed to the Medical Marijuana Commission by the Republican Senate president pro tempore, Jonathan Dismang of Searcy, made a note of saying he wasn't trying to be critical of either Rutledge or Cotton. He said political solutions don't fully address the complicated nature of the crisis.

Of the two, only Rutledge is up for re-election this year. Her opponent in the November election, Democrat Mike Lee, did not return a request for comment.