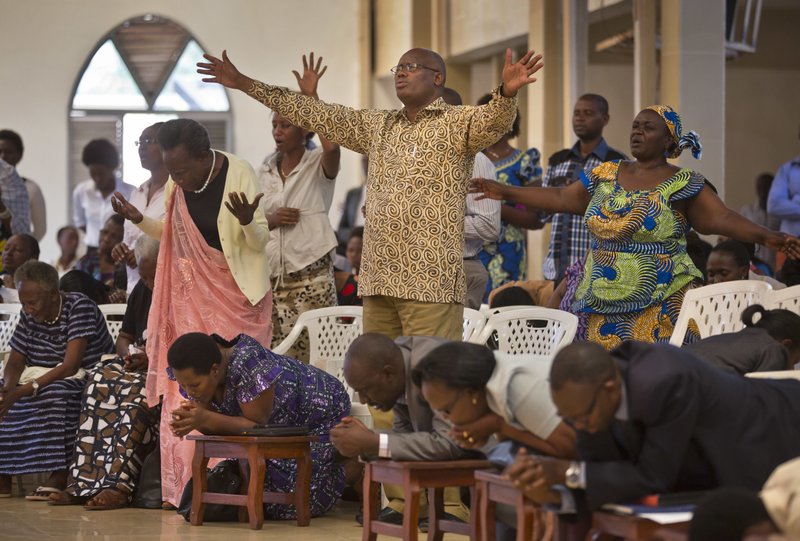 FILE - In this Sunday, April 6, 2014 file photo, Rwandans sing and pray at the Evangelical Restoration Church in the Kimisagara neighbourhood of the capital Kigali, Rwanda. Rwanda's government in 2018 is closing thousands of churches and dozens of mosques as it seeks to assert more control over a vibrant religious community whose sometimes makeshift operations, authorities say, have threatened the lives of followers. (AP Photo/Ben Curtis, File)

KIGALI, Rwanda -- Rwanda's government has closed thousands of churches and dozens of mosques as it seeks to assert more control over a religious community whose sometimes makeshift operations, authorities say, have threatened the lives of followers.

President Paul Kagame has said he was shocked by the high number of churches in the small East African country. "700 churches in Kigali?" he said of houses of worship in the nation's capital in March. "Are these boreholes [deep wells] that give people water? I don't think we have as many boreholes. Do we even have as many factories? This has been a mess!"

Kagame said Rwanda doesn't need so many houses of worship, claiming that such a high number is only fit for bigger, more developed economies that have the means to sustain them.

The closings have drawn mixed reactions in Rwanda, where human-rights groups have long accused Kagame's government of clamping down on freedom of expression, which the president has denied. Six Pentecostal pastors who protested the church closures were arrested and accused of "illegal meetings with bad intentions," and since then other critics have refused to discuss the issue with reporters.

While Rwanda's government describes the closures as tackling churches that have failed to comply with building safety standards, it is taking other steps to oversee the religious community in the largely Christian nation of 12 million people.

Proposed legislation aims to regulate faith-based organizations separately from civil society organizations, said Alexis Nkurunziza, president of the private Rwanda Religious Leaders Forum. Suggestions from religious leaders soon will be forwarded to the Rwanda Law Reform Commission for scrutiny and later to parliament, he said. The legislation is expected to be passed because the ruling party holds a majority of parliamentary seats.

The new legislation would require pastors to have a theology degree before they start their own churches so that they teach correct doctrine, people familiar with the discussions said.

The goal is to regulate the Pentecostal churches that often spring up under leaders who claim to have received a call to preach. Not everyone, however, has the money for such a degree, some observers have said.

The majority of churches that have been closed are said to be small Pentecostal prayer houses, with some preachers suspected of growing rich off often impoverished followers. Some churches meet in tents or houses that cannot accommodate crowds, and noise pollution from nighttime gatherings is a concern, authorities said.

"The prayer houses were found in such poor physical conditions, and we are not targeting any religion," said Anastase Shyaka, the head of the Rwanda Governance Board that regulates faith-based organizations. "We are closing prayer houses of all different denominations and asking them to meet existing health and safety standards for their followers."

Local media in the capital have reported that over 6,000 churches have been closed so far across the country, but Shaka said the actual number was still being compiled.