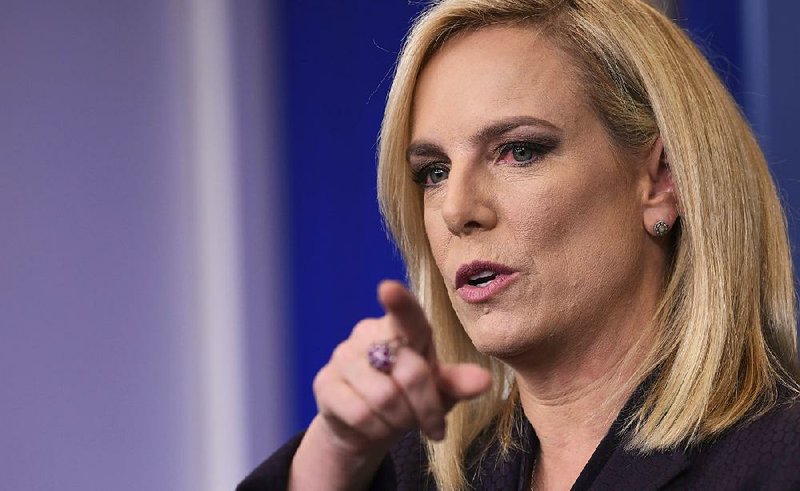 WASHINGTON -- President Donald Trump on Wednesday signed a proclamation directing the National Guard to be deployed to the U.S.-Mexico border.

The "situation at the border has now reached a point of crisis," Trump wrote in a memorandum to his his secretaries of defense and homeland security, as well as his attorney general.

The document orders the Defense Department to assist the Homeland Security Department in securing the southern border to stop the flow of drugs and people. And it orders the agency's leaders to submit a report within 30 days outlining what other steps can be taken.

The "lawlessness" at the border is "fundamentally incompatible with the safety, security, and sovereignty of the American people," Trump wrote. The administration "has no choice but to act."

Trump teased the announcement earlier Wednesday on Twitter: "Our Border Laws are very weak while those of Mexico & Canada are very strong. Congress must change these Obama era, and other, laws NOW! The Democrats stand in our way -- they want people to pour into our country unchecked....CRIME! We will be taking strong action today."

Under Trump's plan, National Guard troops will assist Border Patrol agents until Congress passes legislation to deal with what the administration says are legal loopholes in immigration enforcement, the White House explained in a release late Wednesday.

According to an official familiar with the plan, speaking on condition of anonymity before details were released, the troops are expected to play a support role, conducting tasks such as road development and intelligence gathering.

Nielsen told reporters that she had been in touch with governors of the southwest border states and that she was working with them to develop agreements that will oversee where and how many guardsmen will be deployed. She suggested some troops could begin arriving as soon as Wednesday night, though other administration officials cautioned that details on troop levels, locations and timing were still being worked out.

"We do hope that the deployment begins immediately," Nielsen said.

One senator from a border state derided the move.

Sen. Tom Udall, D-N.M., criticized the deployment as an "offensive effort to militarize the border" and "another pitiful attempt to distract attention from the dangerous chaos the president is creating."

"Smart border technology and more customs officers would be a much more effective and efficient security investment, that would also benefit our economy and relations with Mexico," Udall said in a statement emailed to reporters.

Trump has been frustrated by slow action on building his "big, beautiful wall" along the Mexican border -- a signature promise of his campaign -- as well as a recent uptick in illegal border crossings that had plunged during the early months of his presidency. He also has been bothered that the spending bill he grudgingly signed last month includes far less money for the wall than he'd hoped.

Federal law prohibits the use of active-duty service members for law enforcement inside the U.S., unless specifically authorized by Congress. But over the past 12 years, presidents have twice sent National Guard troops to the border to bolster security and assist with surveillance and other support.

Nielsen said the effort would be similar to a 2006 operation in which President George W. Bush deployed troops to help U.S. Customs and Border Protection personnel with non-law enforcement duties while additional border agents were hired and trained. President Barack Obama also sent about 1,200 troops in 2010 to beef up efforts against drug smuggling and illegal immigration.

Nielsen said her department had developed a list of locations where it would like assistance and was discussing with the governors how to facilitate the plans. She declined to say how many personnel would be needed or how much the operation would cost, but she insisted, "It will be as many as is needed to fill the gaps that we have today."

One congressional aide said lawmakers anticipate 300 to 1,200 troops will be deployed and that the cost was expected to be at least $60 million to $120 million a year. The Pentagon would probably need authorization from Congress for any funding beyond a few months, said the aide, who wasn't authorized to speak publicly and spoke on condition of anonymity.

Governors of most of the U.S. states bordering Mexico were largely supportive of the move to deploy the National Guard.

In Texas, which already has about 100 National Guardsmen stationed on the border, Republican Gov. Greg Abbott said the president's decision "reinforces Texas' longstanding commitment to secure our southern border and uphold the Rule of Law."

"Going forward, Texas will continue to implement robust border security efforts, and this partnership will help ensure we are doing everything we can to stem the flow of illegal immigration," Abbott said in a statement.

New Mexico Gov. Susana Martinez, a Republican, said she appreciated the Trump administration's efforts to involve states in the effort to better secure the border. Arizona Gov. Doug Ducey, also a Republican, tweeted that his state "welcomes the deployment of National Guard to the border. Washington has ignored this issue for too long and help is needed."

California was noncommittal on the administration's plans. Lt. Col. Tom Keegan, a spokesman for the state's National Guard, said Wednesday that the state will "promptly" review the request to "determine how best we can assist our federal partners." The California National Guard already has 55 personnel who provide support at the border through its anti-drug operations.

In Arkansas, which deployed about 200 guardsmen of the 39th Infantry Brigade on six-month orders to assist New Mexico border agents in 2006, the governor said the White House had made some preliminary inquiries to his office about deploying troops the border.

"As a former Homeland Security undersecretary responsible for securing the border, I am well aware of the illegal activity that make the border a dangerous place," Hutchinson said. "The United States must enforce its immigration law at the point of entry."

In Mexico, meanwhile, senators urged President Enrique Pena Nieto to temporarily suspend cooperation with the U.S. on immigration and security issues. In a nonbinding statement approved unanimously Wednesday, the senators asked Mexico's government to freeze joint efforts "in the fight against transnational organized crime" until Trump starts acting "with the civility and respect that the people of Mexico deserve."

Trump first revealed Tuesday that he'd been discussing the idea of using the military at the border with Mattis.

He spent the first months of his presidency bragging about a dramatic drop in illegal border crossings, which some Homeland Security officials had even dubbed the "Trump effect." Indeed, arrests at the border last April were at the lowest level since the Homeland Security Department was created in 2003, and fiscal 2017 saw a 45-year low for Border Patrol arrests.

Yet there are signs the numbers could rise. Homeland Security statistics released Wednesday show that border agents apprehended about 50,300 people in March, a steep increase from March 2017, when that figure was about 16,600. The March 2017 number, however, was significantly lower than apprehensions from the previous four years.

Theresa Cardinal Brown, a former policy adviser for Customs and Border Protection under the Bush administration, said governors have negotiating power over deployment details, such as how long troops would be used and their specific duties.

She said, for instance, that California Gov. Jerry Brown, whose administration has sued the federal government over Trump's border wall, could insist that his state's National Guard troops not be employed to construct such barriers.

"They would have a lot of control because this is a negotiation," said Theresa Brown, who is now at the Bipartisan Policy Center. "[Homeland Security] can't do this unless the governors say yes."

Trump's new focus on hard-line immigration policies appears aimed, at least in part, in drawing a political contrast with Democrats heading into the midterm elections. He has also been under growing pressure from conservative backers who have accused him of betraying his base for not delivering on the wall, and he was set off by images played on Fox News of a "caravan" of Central Americans making their way through Mexico.

Information for this article was contributed by Jill Colvin, Lolita C. Baldor, Matthew Daly, Robert Burns and Nomaan Merchant of The Associated Press; by Jennifer Epstein, Terrence Dopp, Roxana Tiron and Erik Wasson of Bloomberg News; by Seung Min Kim of The Washington Post; and by Hunter Field of the Arkansas Democrat-Gazette.

Guard assigned to border before Caravan's migrants disperse; Mexico grants visas to some