MOVIE REVIEW: 'A Quiet Place' takes family on a trip through sci-fi hell 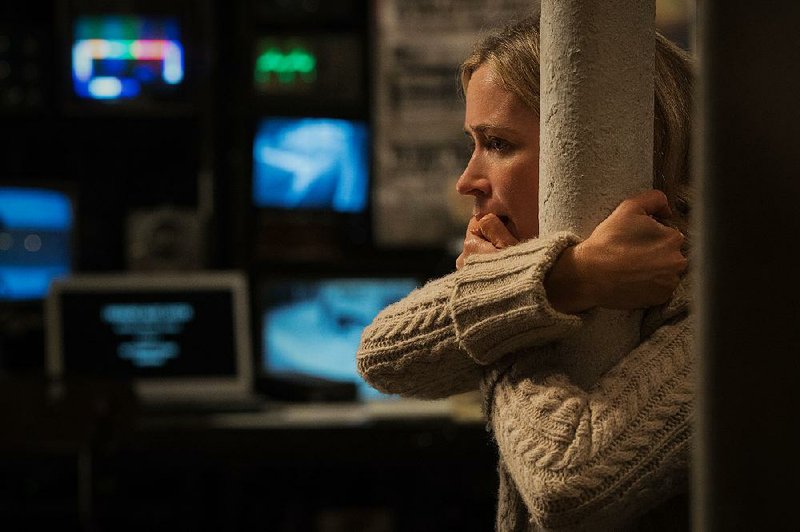 Your personal approach to horror movies matters a great deal in your potential enjoyment of this John Krasinski-helmed thriller about a family in the near future, whom, like the rest of the planet, is suddenly forced to live in near silence, lest the smallest noise attract one of a swarm of nasty, blind alien beasts who seem to have arrived on this planet for the sole intention of tearing everyone's head off.

Do you like going to the theater to see horror films so you can scream and yell and vocally excoriate the characters' idiotically not turning around, or going back down to the basement steps, where we know the ghoul awaits them? If so, you might want to think twice about this one: In keeping with the film's oddly affecting lack of dialogue and anything beyond ambient sound, the slightest rustle of a popcorn bag, or swig from a straw stands out like a firecracker in a concert hall.

Rating: PG-13, for terror and some bloody images

By limiting the sound itself -- the film's tense opening minutes are only resolved after a most welcome slight swell of soundtrack from a lone piano -- Krasinski's film demands us to be as quiet as the characters, in a similar way to when someone whispers to you, and you feel compelled to return in equally hushed tones, even if you don't know the actual reason why you're doing it.

The first line of dialogue -- for the record, uttered by Krasinski's patriarch character, Lee, it's "You'll be alright, I promise" -- doesn't occur until the film is about a third of the way in, which leaves an awful lot of time for the viewers to get into the groove of its increasingly unnerving reticence.

In this way, whenever the film does offer a resonating sound, say the tipping over of a lantern, or the dropping of a cellar door, it explodes like a thunderclap. Conditioned as we have come to be in the course of watching the film, as when you stand in dim light long enough for your eyes to adjust to the near darkness, Krasinski and his co-writing team of Scott Beck and Bryan Woods, have properly prepared us for nearly any kind of potential trauma.

Lee, along with his wife, Evelyn (Emily Blunt), and their two surviving children, the perpetually terrified adolescent Marcus (Noah Jupe), and their notably deaf teen daughter Regan (Millicent Simmonds, from Wonderstruck) all live in a farm house somewhere in the rolling woods and hills of an unnamed part of the country.

Having adapted to their peculiar set of circumstances -- various scraps of newspaper headlines clue us in ("It's Sound!" declares the NY Post) suggest the problem is worldwide, and that no one seems to have any answers as to what's happening or why -- they lead a silent but engaged life together, even as the mother is pregnant with another child.

Things start to go downhill on day 473 (helpfully noted in an overlay), when Lee and Marcus head uneasily to the nearby river to see if their traps have caught any fish; while Regan, dealing with some personal grief, leaves the house in misery in order to attend to a shrine of one of her lost siblings just past a nearby bridge.

Left alone, Evelyn has an unfortunate series of events happen to her in blow-by-blow fashion. First her water breaks, then, stumbling down the staircase to their basement safehouse, she steps onto a nail in her bare feet, causing her to lose her balance and crash to the ground, a noise that surely will attract the ravenous creatures, from wherever they are hiding in the area. Thus ensues one of the more excruciating birth scenes you will likely see this year, with Evelyn having to duck and hide from the creatures, while simultaneously trying to give birth, all while stifling her cries of agony from the contractions.

It's a great set-piece, even if it lets up on us a bit too quickly, a mistake the still-callow director (this is his second feature) repeats more than once. With just a bit more refinement and tighter screws, he could truly have wrung his audience dry by the end of this scene: given the creepy effectiveness of all that silence, he had us right where he wanted us, and instead lets us squirm away.

Still, credit has to be given for the film's audacious gambit, and for that matter, a studio (Paramount is the distributor) that would greenlight such a project whose actual lines of spoken dialogue might take up half a dozen pages of script. Instead, we watch the family communicate through sign language -- which, having a deaf family member, they were all well-versed in, one reason we are to believe that they have managed to survive as long as they have-- and allow the simple changes in air density, the faint sound of rustling dried leaves, or corn stalks being brushed past, to create a riveting atmospheric resonance.

The film also packs in one final bit of anxiety-inducement from the audience, a strong hint as to the creatures' potential weakness, but presented to us while the characters remain totally oblivious, which pushes us long past the point of discomfort toward true anguish.

If the actual ending comes off a bit hackneyed -- let us just say in this unfortunate future, Sonic Youth would have survived long after most other bands would have been decapitated -- and overly simplistic, the film's early scenes of nervous foreboding still resonate.

A more seasoned director, with better command of his palette might have turned this into a minor masterpiece of suppression and audience control, but despite not bleeding us all the way out, it's still a genuinely eerie experience, and on this Day 96 of our cinematic calendar, that's pretty much good enough. 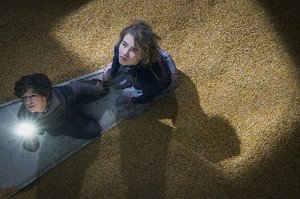 Siblings Marcus (Noah Jupe) and Regan (Millicent Simmonds) live in a silent world with an undercurrent of dread in John Krasinski’s horror film, A Quiet Place.

Print Headline: Silence is golden: A Quiet Place takes family on a trip through sci-fi hell