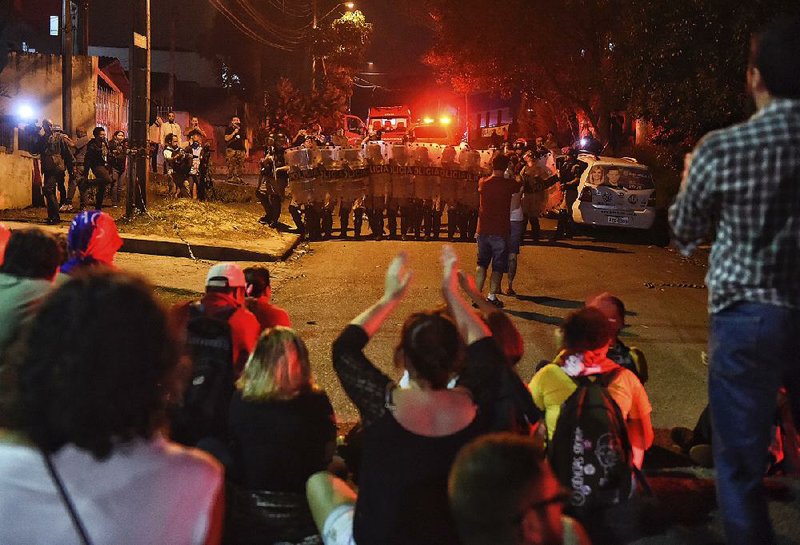 CURITIBA, Brazil -- Former Brazilian President Luiz Inacio Lula da Silva woke up in jail Sunday as the first current or former president in Brazil's modern history to be incarcerated, adding a measure of unpredictability to the country's coming presidential elections.

Foreshadowing possible unrest in the weeks to come, about 500 supporters remained outside of the jail hours after police shot rubber bullets and sprayed tear gas to disperse the crowd.

The Workers' Party said eight people were injured during the previous night's clashes and one was hospitalized. No serious injuries were reported.

"The police cowardly attacked us last night, but we accept that we have to stay outside the perimeter. We will respect it," said Roberto Baggio, local coordinator of the Landless Workers' Movement. "We are expecting people from southern Brazil to arrive here today. We are not leaving until Lula is freed."

Federal police agents said da Silva did not speak during his transfer from Sao Bernardo do Campo to Curitiba in Parana state.

Da Silva's fall from grace has unfolded steadily over the past week after the Supreme Federal Tribunal, the country's top court, ruled against his petition to remain free while he continued to appeal his 12-year sentence for money laundering and corruption. But his prison conditions will not be dismal.

Not considered a formal cell, the 160-square-foot room that has been set aside for the former president is on the fourth floor of the five-story Federal Police building in Curitiba. It is mostly used as a dormitory for agents visiting from other cities across the country.

Meanwhile, opinions about the incarceration of da Silva remained strong in the southern city of Curitiba, which is considered to be the center of the "Car Wash" investigation.

Judge Sergio Moro, who oversees many of the Car Wash cases in the city and ordered da Silva arrested, is often seen as a hero for jailing politicians involved in the widespread corruption scheme.

"There are a lot of people in jail who haven't even been tried. Lula was sentenced to 12 years in prison, he should have been there already," said Valmir Oliveira, who works for Parana's sanitation company. "For the majority that works for this country, this was a relief. He is not above the law. I hope more of those politicians come to Curitiba."

Da Silva will be held far from other prisoners in the building, who are located on the second floor, Brazilian news site G1 reported.

Some of those being held in the general lockup area are also charged with crimes related to the Car Wash corruption scandal, such as Antonio Palocci, a former minister in da Silva's government, and Leo Pinheiro, the former president of construction firm OAS, who testified that the apartment at the center of da Silva's case was reserved for the former president as part of a bribe.

During his time at the jail, da Silva will be on 24-hour watch and will be given two hours outside each day. His three meals will be served with plastic utensils and he will be able to receive visitors on Wednesdays, G1 also said.

The towering political figure, who had originally defied an arrest warrant and hunkered down in a metal workers union where he began his rise through the ranks of Brazilian politics, will continue to appeal his corruption conviction from jail.

He is the latest high-profile Brazilian to be ensnared in the Car Wash investigation, which has seen several of the country's political and business elite arrested over the past four years.