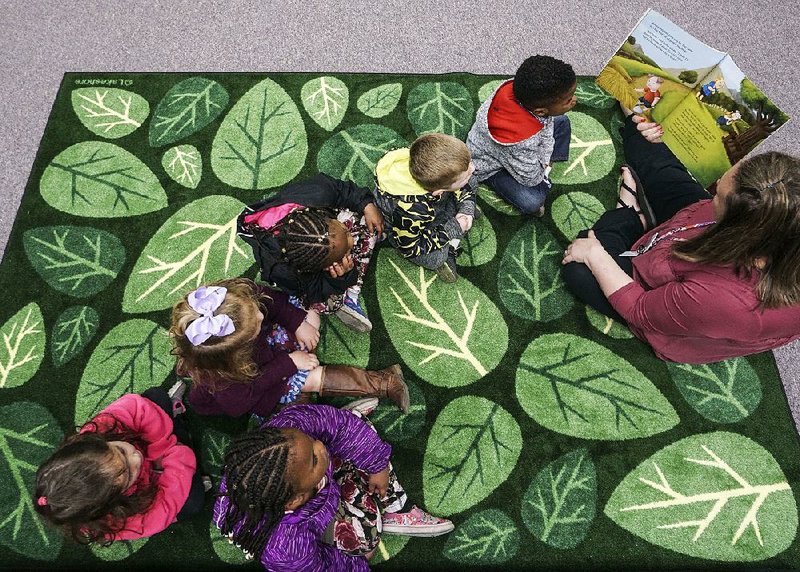 A new state program designed to eliminate preschool suspensions and expulsions served nearly triple the children in its first year as officials had initially predicted, according to recently released data detailing the state Department of Human Services prevention program.

With the rollout in the summer of 2016 of the BehaviorHelp Response System, Arkansas became the first in the nation to require all of its publicly funded child-care facilities to seek intervention from the state before suspending or expelling a child.

Since then, the program has served 264 children at 173 pre-kindergarten centers in 50 Arkansas counties -- nearly three times the number initially predicted, said Arlene Rose, assistant director for operations and program development with the department's Child Care and Early Childhood Education Division.

The rate of preschool expulsions and suspensions in Arkansas was not previously tracked. The Human Services Department began collecting raw data with the program's rollout, which showed about 4 percent, or 11, of the 264 children referred to the program in its first year were actually expelled after all the intervention methods were exhausted.

"It has been really exciting to see the response, to hear from the teachers as to how we've been able to help them to help the children," Rose said.

The BehaviorHelp program was the department's answer to a challenge from the federal Health and Human Services and Education departments for states to reduce and "eventually eliminate" expulsions and suspensions in early learning settings.

Arkansas is now featured prominently in federal brochures and reports as a success story to emulate. Other states are now recognizing the value of investing in early childhood programs like BehaviorHelp. Colorado now requires social-emotional development training for child-care providers. In Ohio, legislators allocated millions in state funding for intervention programs.

The system kicks in when a child-care provider reports via the online BehaviorHelp system that a student has reached a critical point, where suspension or expulsion is being considered.

In the program's first year, "hurting others" was the No. 1 reported problem, followed by difficulty following routines, not paying attention, refusal to sit still, property destruction, not acting age-appropriate, frequent crying, self harm, no interaction with other children and no interaction with staff. A single report can have multiple causes.

Within 48 hours, a specialist from the Division of Child Care and Early Childhood Education contacts the provider to assess the problem and decide the necessary intervention.

"Sometimes it's talking the provider off a cliff, hoping to calm them down, before they're really able to engage in conversation," Rose said.

The department staff decides the needed level of intervention based on a pyramid where each color-coded level -- beginning at the base with a yellow "Effective Workforce" and topping off with a red "Intensive Intervention" -- activates different responses.

The first level can be something as simple as a pamphlet or online training course with behavior-modification tips, while the higher steps activate the program's many partners to provide intensive on-site evaluation, training or mental-health intervention.

When Lindsey Jones, director of Homer Adkins Pre-Kindergarten in Jacksonville, first reached out to BehaviorHelp last year, a member of the childhood services team from Arkansas State University in Jonesboro was at the school within a couple of days.

The consultant not only observed the child in question, but also the classroom as a whole, looking for triggers or ways the classroom layout, curriculum or behavior modification tools could be improved.

"For our teachers, just that outside person coming in, looking, seeing what's going on and just getting their input is refreshing and helpful," Jones said. "It just kind of gives them a different perspective. And when you're in the heat of the moment all day, every day, you need an outside perspective."

Solutions can be as simple as providing more toys in a classroom or tightening the schedule and adding more routine.

At Homer Adkins, students are taught to diffuse their anger by "being a STAR."

"Because they learned it during carpet time, whenever everybody's calm and everything is going OK, it's not a foreign concept to them in the heat of the moment," Jones said.

Instead of discipline, the program focuses on reinforcing the positive and giving children the language and tools to express their feelings. The program partners also train teachers to see the "positive intent" of the child's actions.

When Lisa Gaddy, a consultant from the ASU childhood services team, was observing recess at Homer Adkins recently, a child threw another's shoes over the fence. Another child -- the student she was observing -- immediately raced to the gate to leave the playground.

"Lisa just calmly walked out there, got him and brought him back," Jones said. "She said, 'I know you were trying to get that shoe for your friend. I really appreciate you trying to help us, but when you leave the playground, I can't keep you safe.'

"In that child's eyes, he didn't get punished for something, but he was explained the importance of safety," Jones added.

Identifying what's behind a child's behavior is essential to the solution, Rose said.

"The trauma that was experienced by the children really broke my heart," she said.

According to the data, foster care and parental divorce topped the list of trauma experienced by the children who were referred for expulsion or suspension. Among the other causes were parental incarceration, parental drug abuse/mental illness, abuse/neglect and domestic violence.

It's in some of these more severe cases that a University of Arkansas for Medical Sciences program, Project PLAY (which stands for Positive Learning for Arkansas' Youngest) -- an early childhood intervention program that is primarily staffed through community mental health centers -- intervenes.

Mental-health professionals go into the classrooms and partner with the teacher to develop strategies for the specific issues, such as severe behavior issues or a child acting out sexually.

The licensed mental-health professionals can also work with an individual child in that setting instead of at a therapist's office.

The expansive range of partnerships are especially vital to Homer Adkins students, many of whom are from low-income homes and have traumatic life backgrounds, said Sarah Berger, the behavioral interventionist for the facility.

"That's another reason we were interested in BehaviorHelp, because they do have experience and resources with helping students like ours," Berger said.

The first year of the program also brought greater insight to its needs, identified additional resources and highlighted some flaws that needed tweaking, Rose said.

While the demand was higher than expected, not all child-care providers utilize the program.

The requirement to contact the BehaviorHelp system before expulsion or suspension applies only to those centers that are funded through the state's annual $50.3 million child-care voucher system, as well as the state's Arkansas Better Chance child-care programs.

There is no consequence, such as a fine, for those who fail to notify the program before expelling a child.

"Our approach has always been an educational process," Rose said. "It takes a minute for people to really learn and understand what that means, so we did not want to be punitive just out of the box."

Private day cares can use the BehaviorHelp system free of charge, but it is not a requirement.

The unexpected demand also unveiled the need for more program partners. Along with Project PLAY and ASU, others have been brought in, such as educational cooperatives, the Arkansas Better Chance program leaders, and representatives from state agencies on education, licensing and disabilities.

"It's much, much bigger than what we can do ourselves," Rose said.

Funding and staffing were also affected by the unexpected response. The cost for the program -- most of which comes from the federal Child Care and Development Block Grant -- is estimated at around $600,000, Rose said.

BehaviorHelp was founded and continues to operate without any additional state funding and only one new staff member.

All other needs are handled by shifting existing resources and employees. Job descriptions were revised to share BehaviorHelp responsibilities with other programs.

"They [the employees] were pretty much hand-picked for this particular role because of what we felt they could provide in terms of support and helping stay calm in very stressful situations," Rose said.

The reduction of suspensions and expulsions will have a long-term impact on the children throughout their lives, said Rose.

In its policy statement on preschool expulsion and suspensions, experts at the U.S. Department of Health and Human Services say that children who are expelled or suspended are more likely to drop out of high school, experience academic failure and grade retention, hold negative school attitudes, and face incarceration.

The practice may also delay the process of identifying and addressing underlying issues, such as disabilities or mental health issues, according to the department policy.

"My goal is that these young children will be well-adjusted, very productive citizens," Rose said."We want to see them be successful in school, successful at home and able to regulate themselves in a way that's good." 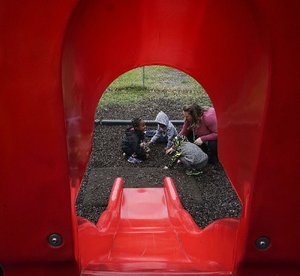 Photo by Mitchell PE Masilun
Behavior interventionist Sarah Berger (right) interacts with her students during playtime at Adkins Pre-K in Jacksonville on Thursday.