Letter grades out on Arkansas' schools 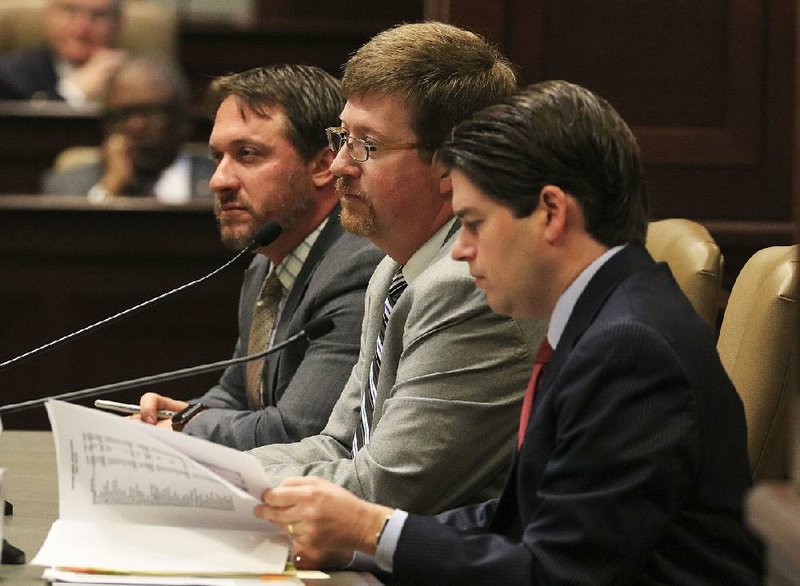 The Arkansas Department of Education on Wednesday posted letter grades for the state's more than 1,000 schools, awarding A's to 163 of the campuses, B's to 290 campuses and F's to 33 schools for the 2016-17 school year, the most recently completed school year.

A "C" grade was the most common given at each of the school organizations: elementary, middle and high schools. Better than 37 percent of all schools, a total of 384, received C's on the newly released 2017 School Performance Reports.

There were 170 D's, according to the Education Department. The agency based the letter grades on the new "ESSA School Index Scores," which are numerical scores calculated using formulas developed by state education leaders and approved by the U.S. Department of Education earlier this year -- all in response to the federal Every Student Succeeds Act of 2015.

The Every Student Succeeds Act is the school accountability law that replaced the federal No Child Left Behind Act of 2002, which called for every student to achieve at grade level on state math and literacy tests by 2013-14.

To that end, schools had to meet yearly achievement goals or be labeled as needing improvement, which then would require them to set up tutoring programs or let students transfer to other schools.

The Every Student Succeeds Act puts more responsibility for improving schools at the state and district levels.

Arkansas is one of 34 states with an approved plan for complying with the new federal law.

Arkansas Education Commissioner Johnny Key said the new letter grades in the Arkansas plan aren't meant to define a school or a district.

"It's a measure. It's an important measure," Key said, "but it's a snapshot in time of where the schools are in this new school accountability system that is based on data that [school leaders] didn't know a year ago was going to be used."

Key said there are no sanctions or penalties for the schools that received D's and F's.

The Haas Hall Academy charter schools in Fayetteville and Bentonville, on the other hand, were the highest-scoring high school campuses in the state.

"The letter grades are information that we hope will generate conversations at the school and district level," Key said. "In the past, there were sanctions. If you were an F school you didn't qualify for certain funding opportunities.

"That didn't make sense because a lot of those schools were the schools that needed more assistance," he said. "We really tried to make this a tool that drives conversation for improvement rather than a designation to be afraid of."

The letter grades and the numerical ESSA School Index Scores on which the letter grades are based are an addition for 2016-17 to the already data-laden annual School Performance Report, which is now available for viewing at myschoolinfo.arkansas.gov.

Arkansas Code Annotated 6-15-1402 calls for the department to annually prepare and publish on its website by April 15 a performance report for each public school in the state. The report by law is to be easily understood by parents who are not professional educators.

The new ESSA numerical scores take into account not only student performance and improvement over time on the state-mandated ACT Aspire exams, but also the progress of English language learners on the state required tests, high school graduation rates and multiple factors related to school quality and student success -- such as student attendance, science achievement, reading at grade level, grade-point average, college entrance exam results and community service by students.

In addition to a school's overall ESSA School Index Score and letter grades, the annual School Performance Reports include ESSA index scores for a school's student subgroups. The subgroups include black, white and Hispanic students, as well as students who are not native English language speakers, students from low income families, and students who receive special-education services. It takes a least 15 students to make up a subgroup.

The reports show how a school's overall student body and its subgroups did compared with state averages.

The grading scales for each school organization level varies. For example, the lowest A for a high school is a score of 75.4; for a middle school, it's 78.37; and for an elementary school, it's 80.35.

Reaction to the letter grades from school system leaders was mixed Wednesday.

Janice Warren, interim superintendent of the Pulaski County Special district, noted the variety of grades in the district's elementary schools, some pleasing, some not.

She said she was disappointed with the grades for Robinson, Mills, Sylvan Hills and Maumelle high schools.

"We're better than D's," she said, adding that steps are already underway to strengthen instruction, particularly in math.

Jim Tucker, superintendent of the El Dorado School District, said the letter grades that were applied to his schools -- two F's, two D's, two C's and one B -- are an inaccurate representation of the district.

"We have excellent teachers and a very rigorous curriculum," he said. "It breaks my heart for the teachers" who have invested everything they have into their work with students.

He said 85 percent of the high school's graduates go to college, a rate higher than the state and national rates. And of those, 75 percent continue into their sophomore years, an indication of their preparedness.

Tucker also pointed out that the district's four elementary schools received varying grades -- despite the fact that they all have the same curriculum, and they all have outstanding teachers who receive the same professional development.

"Parents don't really understand the meaning behind the grades. They may move their child to a school that is an A school, but that doesn't mean it is a better school," he said.

Elizabeth Johnson, a longtime employee and now the new superintendent of the Lee County School District -- where both the elementary and high school received F's -- said plans to address the scores include a four-week summer school for first- through 11th-graders this year, a reorganization of grades to group sixth- through eighth-graders together to better meet their academic needs, and a stress on math and literacy skills in the lower grades.

The district is in the Arkansas Delta.

"We have good children who need to be taught," Johnson said about a part of the state where communities struggle to provide sufficient jobs that will result in more parents and other adults becoming motivated to invest in the local schools.

Larry Bennett, the superintendent of the Newport School District -- where the system's two schools received C's -- said he wished the grades were better.

"We'll have conversations and see if we can't all pull together and get those grades higher," Bennett said, noting that students in Newport and across the state are currently taking the latest round of ACT Aspire tests.

In the Little Rock School District, the state's largest school district, the schools received five A's and six F's, as well as 16 D's, 11 C's and four B's. Forest Park and Don Roberts elementaries had the highest scores of 89.39 and 89.36, respectively.

In Fayetteville, there were eight A's, five B's and two C's. In Jonesboro, there was one A and one B, three C's and four D's. In Pine Bluff, there were three D's and four F's. 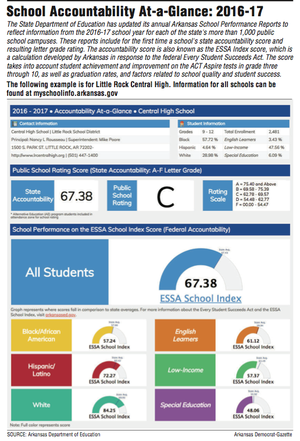 *CORRECTION: El Dorado High School received a D letter grade for the 2016-17 school year based on a numerical score that took into account student achievement and improvement on state exams, graduation rates and indicators of student success and school quality. A previous version of this article included an inaccurate lower grade for the school.