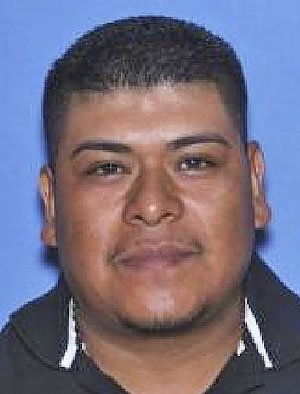 FAYETTEVILLE -- Tensions were high and security heavy in the courtroom Wednesday when a Springdale man was sentenced to 17 years in prison for plowing into a scooter, killing one rider and severely injuring the other.

Sergio Rodriguez, 34, pleaded guilty Monday in Washington County Circuit Court to manslaughter, second-degree battery and leaving the scene of an accident, all felonies.

Circuit Judge Mark Lindsay sentenced Rodriguez to 10 years on the manslaughter charge, five years on the battery charge and two years for leaving the scene. Lindsay ordered the terms to run consecutively for a total of 17 years at the Arkansas Department of Correction.

Police said Rodriguez' pickup hit the scooter about 8 p.m. Nov. 6, 2016, near the intersection of Crossover and Zion roads.

Hailey King, 18, of Fayetteville, died at Washington Regional Medical Center. Osmin David Gutierrez, 20, of Springdale, was injured and both his legs had to be amputated.

Members of all three families were in court. King's mother, Kathryn Hall, and Gutierrez gave victim impact statements. Hall said there would never be justice in the case and King's daughter, who was 2 at the time, will never remember her mother.

"I have thought about this day for 17 long months and what I would say. I have tried to find it in my heart to forgive, but I cannot," Hall said.

King and Gutierrez were riding the scooter south on Crossover Road. Rodriguez was driving a red Chevrolet Silverado and hit the scooter from behind as it approached the intersection.

Rodriguez was driving over the speed limit and went more than 250 feet with King on the hood of his pickup before she fell off, according to court documents. Rodriguez turned right on Zion, dragging the scooter and Gutierrez under his pickup, then turned into Valley View Apartments where Gutierrez came loose.

"The actions this man took after hitting my daughter, by never stopping or even trying to get help for either of them is something I cannot ever imagine doing even to a wild animal. He thought of himself first and foremost and this I cannot now or ever understand," Hall said.

State law requires drivers involved in personal injury accidents to remain at the scene for at least 30 minutes and, if necessary, render aid or make arrangements for treatment.

Gutierrez, sitting in a wheelchair, said he has forgiven Rodriguez, but his dreams have turned into nightmares.

"He might be going to prison but I'll be incarcerated in my own body for life, which is a result of him deciding not to stop," Gutierrez said. "Anxiety, despair, isolation, depression, frustration, vanity, anguish and fear are things I continue to cope with every day. It's always a struggle to motivate myself to get up every morning."

"This was a horrible tragedy, and my client is very remorseful for his actions and inactions," Weber said. "We hope by pleading and getting a term of years, this brings some satisfaction and closure to the victims."

Weber said Rodriguez, who was a lawful permanent resident at the time, will likely be deported upon release from prison.

The victims' families reacted with outrage when, at the end of the sentencing hearing, Rodriguez was allowed to remain free on $25,000 bond until April 25 or a bed opens up at the Arkansas Department of Correction, whichever comes first.