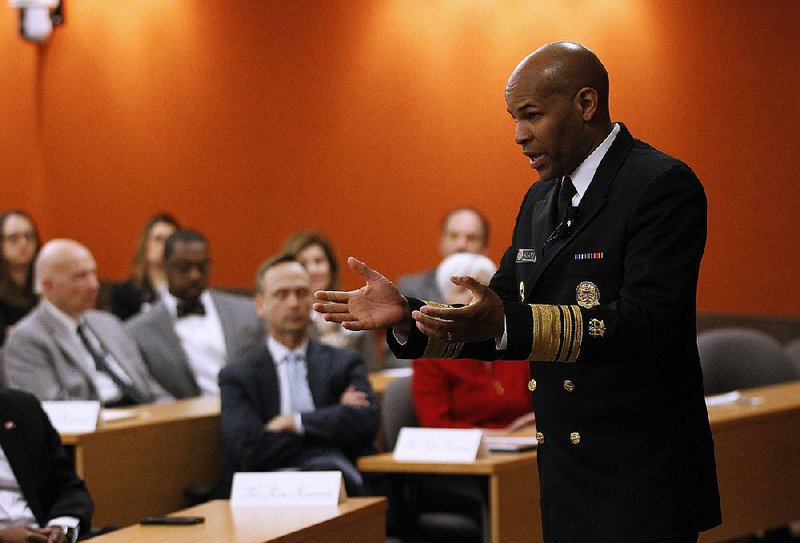 U.S. Surgeon General Jerome Adams, speaking Thursday at the state Health Department in Little Rock, said “Everyone has a chance to save a life …. if you’re willing to carry naloxone.”

Arkansas has too many patients taking opioid pain medication and not enough who are getting flu shots, U.S. Surgeon General Jerome Adams said in Little Rock on Thursday.

Adams also spoke at the University of Arkansas for Medical Sciences while promoting the advisory he issued last week urging more people to carry naloxone, a drug that can reverse the effects of an opioid overdose.

An American dies of an opioid overdose about every 12 minutes, Adams said. More than half of such deaths happen at home.

"Everyone has a chance to save a life, to be a hero, if you're willing to carry naloxone," Adams said.

An order approved by the Arkansas State Medical Board and Board of Pharmacy last year allows pharmacists to dispense the drug without a prescription to people at risk of an overdose, as well as the opioid user's family members, friends and others.

Those kits have saved 65 lives, he said. Now, he said he is exploring plans to distribute the kits to counselors, librarians and schools.

"The state embraced it some time ago," he said.

According to the U.S. Centers for Disease Control and Prevention, 32,445 people, or about 10 people per 100,000 residents, died of prescription opioid overdoses in 2016.

Arkansas had 152 such deaths, giving it a rate of about 5 prescription opioid overdose deaths per 100,000 residents, according to an analysis of CDC data by the San Francisco-based Kaiser Family Foundation, which researches health policy issues.

The same year, Arkansas pharmacists dispensed 114.6 opioid prescriptions per 100 residents, according to the CDC.

That was a higher rate than in any other state except Alabama, where pharmacists dispensed 121 prescriptions per 100 residents.

To reduce the number of prescriptions, Adams said public health officials should educate doctors on alternate pain treatment methods such as physical therapy, chiropractic care and art and music therapy and ensure that insurance plans adequately cover such treatments.

"There are alternatives available that are very good, that are better than opioids at treating pain, but we have to make sure folks are educated about them, both the providers and the public, and we have to appropriately reimburse for those," Adams said.

He also said the state should make better use of its Prescription Drug Monitoring Program, which allows doctors to check a database of prescriptions for painkillers and other frequently abused drugs before prescribing such a drug.

Act 820, passed by the Legislature last year, requires doctors to check the database before prescribing such a drug.

"You still aren't using PDMPs, prescription drug monitoring programs, to the extent that we would like to see," Adams said at the Health Department.

Asked what the state should be doing, he said the system should be easy to use and shouldn't require doctors to check multiple computer programs.

Denise Robertson, administrator of Arkansas' program, said the state switched to a new system Nov. 13 that is faster and easier to use than the previous one. It also allows doctors to look up several patients at the same time, so they can check all their patients before they visit the office.

Later this month, she said, the program will send reports to doctors with information on their prescribing activity for the past six months. Such reports will be issued each quarter, she said.

"We're hopeful that our prescribing rate is going to go down," she said.

Discussing Arkansas' other public-health challenges, Adams noted that the current flu season has been the state's deadliest in several years.

As of Monday, 215 Arkansans had died of the flu. The death toll in February surpassed the 110 people who died in the 2014-15 season, which had been the state's deadliest since the Health Department began tracking flu deaths in 2000.

"Vaccination is another area where you all are not doing a great job," Adams said. "We know that we had a record number of flu deaths this year in Arkansas.

"We need to help folks understand that vaccines are safe and are still the best way to save lives."

According to the CDC, 46.2 percent of Arkansans age 6 months or older received the flu shot during the last season, compared with 46.8 percent of people in that age group nationwide.

"We're doing about as badly as the rest of the United States," said Gary Wheeler, medical director for the state Health Department.

He said a task force of Health Department staff members, health care providers and pharmacists has been exploring ways to make the shot more available around the state. 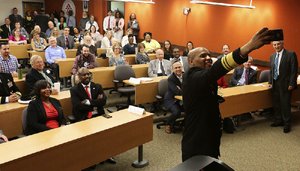 Photo by Thomas Metthe
U.S. Surgeon General Jerome Adams memorializes his talk at the Arkansas Department of Health on Thursday with his cellphone camera. Adams was in Little Rock to visit the department, the University of Arkansas for Medical Sciences and to advocate for making an opioid-overdose antidote more available.