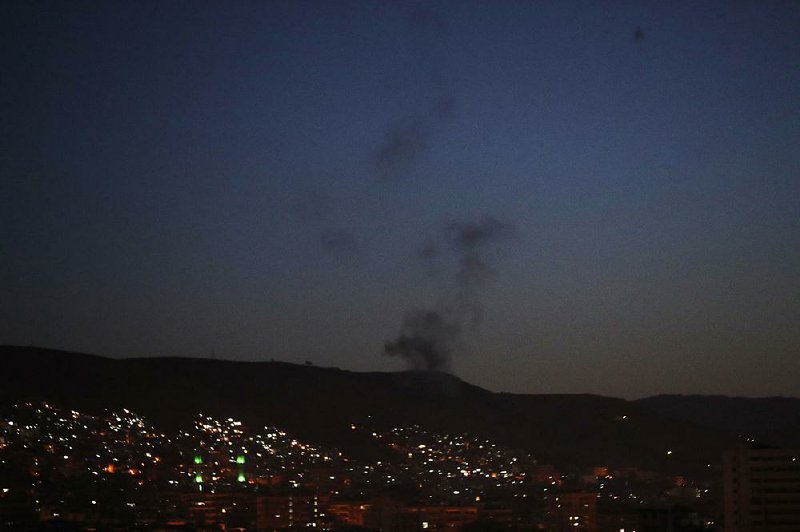 Smoke rises from an area outside Damascus early today after airstrikes targeting different sections of the Syrian capital were launched by the United States and its allies Britain and France.

In a televised address from the White House, Trump said the U.S. is prepared to sustain economic, diplomatic and military pressure on Assad until he ends what the president called a criminal pattern of killing his own people with internationally banned chemical weapons. As explosions rang out, the skies lit up over the Syrian capital.

"These are not the actions of a man. They are crimes of a monster instead," Trump said of the chemical attacks that he blamed on Assad.

He said the allied strikes using precision weapons sought to deter the production, spread and use of chemical weapons as "a vital national security interest of the United States." And he sharply criticized Iran and Russia for supporting Assad's regime.

"To Iran and to Russia, I ask: What kind of a nation wants to be associated with the mass murder of innocent men, women and children?" Trump said, calling the two countries those "most responsible for supporting, equipping and financing the criminal Assad regime."

The Russian ambassador to the U.S., Anatoly Antonov, condemned the airstrikes and warned that "such actions will not be left without consequences."

Gen. Joseph Dunford, the chairman of the Joint Chiefs of Staff, told reporters late Friday that naval and air forces from the three countries struck three primary targets: a scientific research center near Damascus, a chemical-weapons storage facility near Homs and a storage facility and command post also near Homs.

He said the strikes were designed to minimize the risk of civilian casualties, but Syrian state-run TV reported that three civilians were wounded in the attack on the command post in Homs.

Defense Secretary James Mattis said that to his knowledge there were no U.S. or allied losses from the strikes Friday.

Mattis said the strike was "harder" on the Syrian regime than a 2017 strike and described it as a "a one-time shot," adding, "I believe it has sent a very strong message." He was referring to a strike last April in which Trump authorized a barrage of Tomahawk cruise missiles to hit a single Syrian airfield in retaliation for Assad's use of sarin gas against civilians.

Syrian media outlets meanwhile reported that air defenses had hit 13 incoming rockets south of Damascus. Dunford confirmed that Syrian forces had fired surface-to-air missiles, but he said he did not have a full picture of the response.

After the attack ceased and the early morning skies went dark once more, vehicles with loudspeakers roamed the streets of Damascus blaring nationalist songs.

Syria's presidency wrote on Twitter, "Good souls will not be humiliated." Syrian state TV called the attacks a "blatant violation of international law and shows contempt for international legitimacy."

Trump repeatedly threatened military action in recent days. But the presence of Russian troops and air defenses in Syria were among numerous complications weighing on the president, who also had to consider the dangers to roughly 2,000 American troops in the country if Russia were to retaliate for U.S. strikes.

The basis for the assault against the Syrian government is a suspected poison-gas attack April 7 on Douma, a city in the eastern Ghouta suburbs of the capital, Damascus. Dozens of civilians were reported killed.

Both Syria and Russia have denied involvement in the attack.

The suspected chemical-weapons attack in Douma complicated Trump's plans for the region. Before those reports surfaced last weekend, Trump said the American military would be withdrawing from Syria "very soon," once the defeat of Islamic State militants was secured. Earlier this week, Trump tweeted that Russia should "get ready" because a missile attack "will be coming" at Moscow's chief Middle East ally.

Trump said Friday night that "The nations of the world can be judged by the friends they keep."

He added, "Hopefully someday we'll get along with Russia, and maybe even Iran, but maybe not."

Dunford said the only communications that took place between the United States and Russia before the operation were "the normal deconfliction of the airspace, the procedures that are in place for all of our operations in Syria."

In London, British Prime Minister Theresa May said the allied strikes on the Syrian government's chemical-weapons capability aimed not only to protect innocent civilians, but also to prevent such attacks from becoming an international norm.

French President Emmanuel Macron said, "Our response has been limited to the capacities of the Syrian regime allowing the production and use of chemical weapons."

House Speaker Paul Ryan, R-Wis., praised Trump's "decisive action in coordination with our allies," adding, "We are united in our resolve."

Sen. John McCain of Arizona, the Republican chairman of the Senate Armed Service Committee, applauded the airstrikes but said "they alone will not achieve U.S. objectives in the Middle East."

Top Senate Democrat Charles Schumer called the airstrikes "appropriate," but said "the administration has to be careful about not getting us into a greater and more involved war in Syria."

In a statement, Sen. Tom Cotton, R-Ark., condemned Assad for his actions.

"The Butcher of Damascus learned two lessons tonight the hard way: weapons of mass destruction won't create a military advantage once the United States is done with you and Russia cannot protect its clients from the United States," Cotton said, adding that Trump "ought to sustain the attacks" if Assad doesn't learn those lessons.

Rep. Steve Womack, R-Ark., said in a statement that the use of chemical weapons must never be tolerated.

"I support the President's strong response to the Assad regime's actions. Syria must be held accountable," he said in a statement.

The messages of support followed a critical letter sent from three Senate Democrats, led by Jack Reed of Rhode Island, the ranking member of the Armed Services Committee, to Trump. In the letter sent earlier Friday, the lawmakers urged Trump to make a public and compelling legal case for any attack.

"This issue is of critical importance and the American people should be fully informed about your rationale for deploying American military power and the objectives of any U.S. military action in Syria," wrote Reed, joined by Sens. Dick Durbin of Illinois and Bob Menendez of New Jersey.

Mattis declined to say whether he thought the attack would prevent Assad from using chemical weapons again. "Nothing is certain in these kinds of matters," he said.

Russia and Britain exchanged sharp accusations earlier in the day over the suspected gas attack, and the U.S. Navy was moving an additional Tomahawk missile-armed ship within striking range as Trump and his national security aides studied the scope and timing of the military assault.

In Moscow, the Defense Ministry accused Britain of staging a fake chemical attack in Douma.

Britain called the Russian accusation a "blatant lie." The tense statements over Syria come as relations between Moscow and London have deteriorated since the poisoning last month of a former Russian spy in Salisbury, England. Britain accused Moscow of ordering the poisoning; Moscow denies it.

Russian Defense Ministry spokesman Maj. Gen. Igor Konashenkov said images of victims of the purported attack were staged with "Britain's direct involvement." He provided no evidence for that claim.

The Organization for the Prohibition of Chemical Weapons, based in the Netherlands, announced that it would send a fact-finding team to the site of the attack at Douma. U.N. Secretary-General Antonio Guterres said Friday that the first team was already in Syria and a second was expected soon.

Explaining that U.S. officials at various levels were still consulting with allied officials as of Friday afternoon, White House press secretary Sarah Huckabee Sanders said the White House is confident that Syria was responsible for the deaths at Douma.

"We also hold Russia responsible for their failure to stop chemical-weapons attacks from taking place," she said.

The British Cabinet on Friday gave May the green light to join the U.S. and France in planning military strikes in Syria. She and Macron spoke separately with Trump on Thursday. Macron, who spoke to Trump again on Friday, said France had proof the Syrian government carried out chlorine gas attacks and his country would not tolerate it.

The Kremlin said Russian President Vladimir Putin spoke with Macron and the two leaders agreed to coordinate their actions to avoid further military escalation in Syria.

Germany, meanwhile, called for more pressure to be applied on Russia for its support of Assad.

Speaking Friday in Brussels, German Foreign Minister Heiko Maas portrayed Russia's veto of 12 resolutions in the United Nations Security Council as evidence that the Kremlin is prolonging the war in Syria. "We can't go on like this," Maas told reporters at the European Union's headquarters.

As Trump deliberated Friday, the Navy said the USS Winston S. Churchill, a destroyer armed with Tomahawk cruise missiles, was approaching the Mediterranean. It was to join the USS Donald Cook within range of Syria for potentially firing Tomahawks, which were the weapon of choice when the U.S. struck Syria last year to punish it for using chemical weapons.

It was not clear as of 9 p.m. Friday if the U.S.-led attack on Damascus sites utilized the Navy vessels.

The suspected chemical strike in Douma came after weeks of an intense air campaign that killed an estimated 1,600 people and tore the rebel-held Damascus suburbs of eastern Ghouta apart, leveling towns in an enclave that once housed 400,000 people, according to U.N. estimates.

Douma was declared retaken by Syrian forces on Thursday. The announcement, delivered by Russia's military, signaled the end to the wide-scale offensive to take back the enclave. 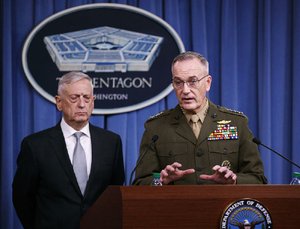