ON THE COVER: Downtown Is Uptown 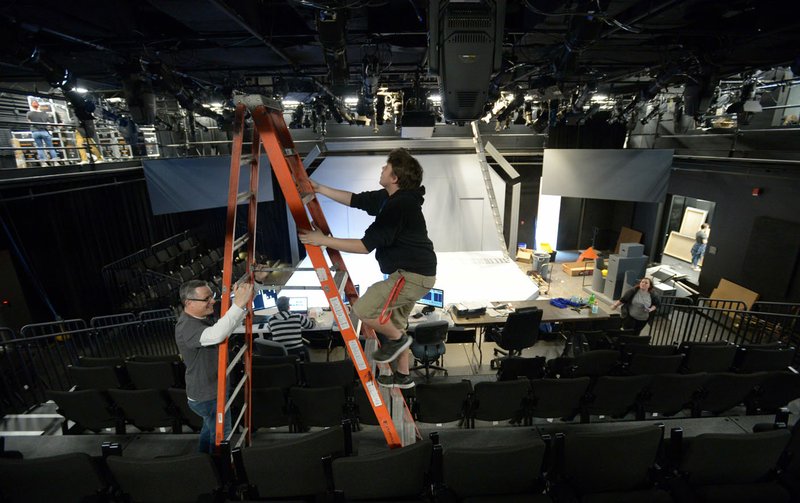 NWA Democrat-Gazette/ANDY SHUPE Michael Riha, left, chairman of the University of Arkansas Theatre Department, steadies a ladder for Austin Aschbrenner, a first-year scenic design graduate student from Beebe, as they focus lights April 6 inside the renovated Global Campus Theatre on the Fayetteville square.

The University of Arkansas Department of Theatre is on the move -- both literally and figuratively. Next week, department chairman Michael Riha will unveil the ambitious renovation of the UA Global Campus Theatre, where UA students and faculty playwrights will also stage ArkType, a brand new, weeklong play festival.

And Riha couldn't be more excited about both endeavors.

"It will be the most state-of-the-art, digitally equipped black box theater in the state of Arkansas," Riha says of the renovated space, which will include an 18-foot lighting grid, a sprung floor, two five-person dressing rooms, a production booth, an upstairs balcony for orchestras or actor entrances, a box office and a storage space.

Riha says the department plans to produce four shows a year at the Global Campus Theatre and only two at the University Theatre space on campus.

"We're going to be doing more shows at Global because parking is easier, and people can get dinner and drinks," says Riha. "There's an art gallery right across the street. It's a very welcoming place to come and see theater. On top of that, it gives our university another connection to the town, because we will be hosting the Fayetteville Film Fest and Arts Live shows there. It's not going to be a rental space, because we will be holding classes in there, as well as productions and rehearsals. But we're excited to maintain our relationship with Arts Live -- because we believe in youth theater -- and with the Fayetteville Film Fest. We also hope to have a partnership with the Roots Fest to get small music acts in there, as well."

Those interested in seeing the new space, says Riha, can attend an open house from 3 to 5 p.m. April 26.

"People can poke their heads in and talk to us about the space," says Riha. "There will be a ribbon cutting with the mayor that day."

But an even better way to see the new theater in action would be to catch one -- or more -- of the shows being presented during ArkType, the seven-day play festival that will celebrate the playwriting talent housed at the University of Arkansas.

"We feel that writing is a serious strength of our students and faculty," notes Riha. "With [playwrights] Les Wade and John Walch on our faculty, we thought we would do something that honored what we think is a growing interest at the University of Arkansas Department of Theatre."

Walch, a published playwright and the head of the department's playwriting program, says the festival is an indication of the support for new work that exists within the department.

"These playwrights are getting fully supported productions of their thesis plays," he notes. "I believe work begets work. This is generating a lot of excitement around new work, giving students of all levels -- undergraduate and graduate -- experience and exposure to working on a new play and being in on that process. My hope is that this energizes an already very supportive department to continue to support new work."

Walch says that seeing their plays on stage is critical for playwrights.

"From my perspective, as an educator, the playwright doesn't really know how the play will function until they see them in the crucible of production," he says. "You learn so much as you get a team around it. You get designers who are visual storytellers, who can help you tell your story. You get actors who help you interpret and deepen your characters. You get directors, who help you shape your vision. And you get an audience, from whom you learn a tremendous amount in the showing of the play."

Third-year MFA students Paul McInnis ("Rise") and Meghan McEnery ("The Poodle Trainer") will mount full productions of their plays. Ten additional student-written plays will receive staged readings. Other events during the week include a production of Austin Dean Ashford's award-winning play "(I)sland T(rap)," the LatinX Theatre Project's production "Scratch That!" and the innovative "Theatre for One": Conceived by Christine Jones, this mobile performance space will operate in the lobby in between productions and will present eight short new works from UA faculty members from the creative writing and theater departments.

But wait -- there's more. Walch has written a play specifically for the third-year MFA acting students, titled "A Hamlet: West of Why," that will be performed for the first time during the festival.

"I am learning a tremendous amount from them as we engage in the process," he says. "I'm working on the last scene right now. They have been incredibly game, and they have invested in it. They have helped me shape it significantly, and we are still re-working the last scene based on their feedback.

"It's daunting, because you want to honor these people and, hopefully, get it as right as you can, while also being very aware that this is part of their thesis project, and the roles need to be of equal size and weight. I've never done this -- written for a specific group of actors -- but it's been super fun."

Walch says he is looking forward to having playgoers to give much-needed feedback to the writers and performers.

"We really do need an audience," he says. "That's the joy in all of this -- having people to present it to, and learning how they engage with the work and having them join us on this crazy ride that nobody's ever taken before ... to see where they gasp, where they get on the roller coaster and where it thrills and excites them is kind of a critical element in the development of new work.

"People will see things that have never been seen before, written by young writers who have something urgent and important to say to the world. I hope people join us for the ride." 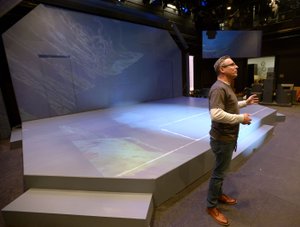 NWA Democrat-Gazette/ANDY SHUPE “We’ll be in partnership with Donald Judges, vice provost for distance education,” says Theatre Chairman Michael Riha of the new Global Campus Theatre. “This is their home, and they are inviting us in their home by allowing this renovation to happen. Without Todd Shields, the dean of Fulbright College of Arts and Sciences, supporting this renovation, financially investing in our program and without Donald inviting us to be a partner, it would never have happened.” 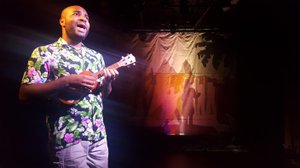 Photo Courtesy Austin Ashford/Cole Wimpee Ashton Dean Ashford’s “(I)sland T(rap)” was a 2018 American College Theatre Festival award-winning show. UA Theatre calls it “a one-person hip hop dramedy mash-up about black Ulysses on an odyssey of self-discovery told through an interwoven narrative of music, poetry and animals.” It will be among productions at the ArkType festival.