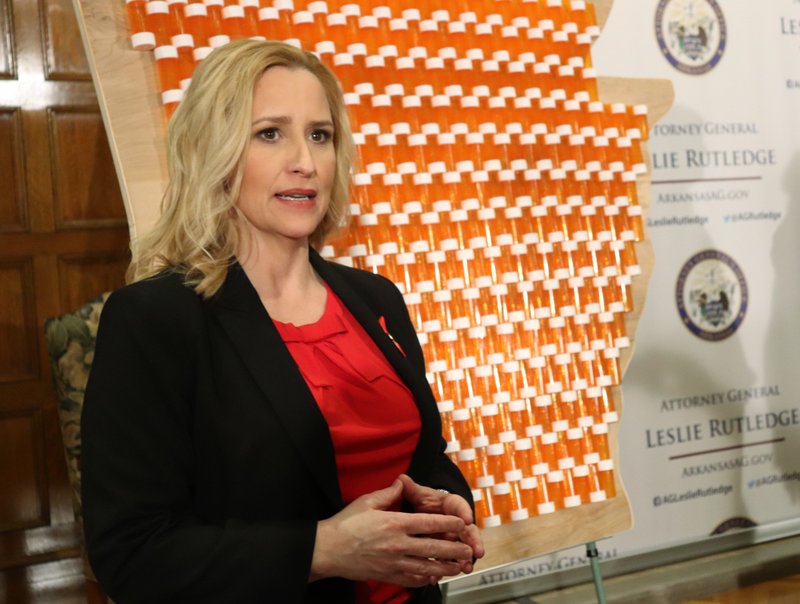 In front of a backdrop that included 401 pill bottles affixed to a wooden map of Arkansas, state Attorney General Leslie Rutledge discusses her lawsuit against three drug manufacturers that she says have contributed to an opioid crisis in the state. ed for 401 deaths two years ago. Rutledge, who appeared with Gov. Asa Hutchinson at a state Capitol news conference on Thursday, March 29, 2018, said drug abuse caused 401 deaths in 2016. (AP Photo/Kelly P. Kissel)

For the fourth time this year, Attorney General Leslie Rutledge has rejected the ballot information for a constitutional amendment that would authorize the creation of casinos in Arkansas.

In a ruling issued late Monday afternoon, Rutledge for the fourth time declined to certify a proposed popular name and ballot title for an amendment sponsored by the Driving Arkansas Forward ballot committee, so named because some of the tax revenue from gambling would fund highway projects. A separate group with a different proposed casino-highway amendment had its proposal rejected last week.

While current state law doesn't allow for stand-alone casinos, it does allow electronic games of skill at Oaklawn Racing and Gaming in Hot Springs and Southland Park Gaming and Racing in West Memphis.

The proposed amendment would authorize state government to issue four casino licenses, with one each for Jefferson and Pope counties, one for Oaklawn in Hot Springs, and one for Southland in West Memphis. The committee's first proposal would have allowed up to three casinos but didn't specify the racetracks.

The popular name briefly describes the proposal and a ballot title is a lengthier summary. Both appear on ballots.

The attorney general's certification of the popular name and ballot title is required to clear the way for the committee to begin collecting the required 84,859 valid signatures of registered voters by July 6 to qualify the proposal for the Nov. 6 general election ballot.

"It is my opinion, based on the ... guidelines established by the [state Supreme] Court, that some additions or changes to your ballot title (and possibly your popular name) are necessary so that the ballot title more fully and correctly summarizes your proposal," the Republican attorney general wrote in her 10-page opinion to attorney Alex Gray, who represents the Driving Arkansas Forward committee.

Rutledge said she cannot at this time fairly or correctly summarize the effect of the proposed measure to voters in a popular name and ballot title without the resolution of some ambiguities in the text of the measure.

For example, Rutledge said that "when read together, your proposed popular name and ballot title indicate or very strongly imply that if this constitutional amendment is approved, there will be a casino at or adjacent to the existing facilities of Southland Racing Corporation ... and Oaklawn Jockey Club, Inc. ...

"However these statements or impressions may be misleading," she wrote in her opinion.

"If there is no assurance that there will be casinos at the Southland and Oaklawn locations, this must be clarified and accurately summarized in the popular name and ballot title," she said.

Last week, Rutledge rejected, on her office's first look, ballot language for a different group's proposed constitutional amendment that would authorize the creation of four casinos at specific locations in Benton, Boone, Miller and Pulaski counties, also to raise more money for highways. That proposal has been advanced by the Arkansas Wins in 2018 Inc. committee.