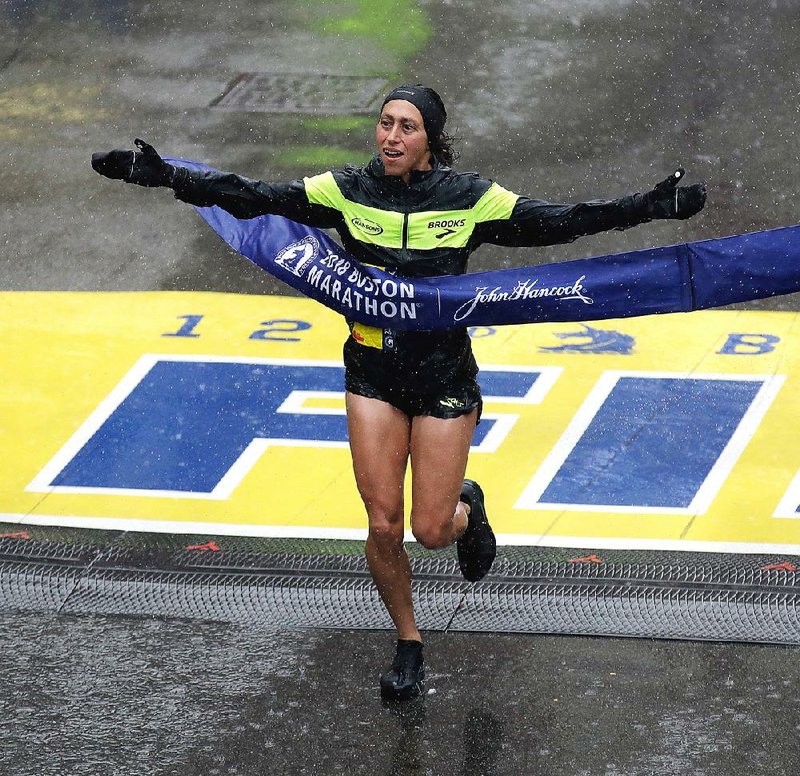 Desiree Linden, of Washington, Mich., won the women’s division of the 122nd Boston Marathon on Monday, finishing in 2 hours, 39 minutes and 54 seconds. She is the fi rst American woman to win the race since 1985.

BOSTON -- After slogging through just a few miles of icy rain and a near-gale headwind that made her feel like she was running in place, Desiree Linden decided she'd seen enough of the Boston Marathon for another year.

"My hands were freezing, and there are times where you were just stood up by the wind. It was comical how slow you were going, and how far you still had to go," Linden said.

A two-time Olympian and the 2011 Boston Marathon runner-up, Linden decided to stick around, outlasting the weather and the rest of the field to win the race's 122nd edition Monday in 2 hours, 39 minutes, 54 seconds. That was more than four minutes better than second-place finisher Sarah Sellers but the slowest time for a women's winner in Boston since 1978.

Canada's Krista Duchene was third, with a total of seven Americans in the women's top 10 and -- for the second consecutive year -- six in the men's.

Yuki Kawauchi splashed through the pelting rain, temperatures in the mid-30s and wind that gusted as high as 32 mph to win the men's race, passing defending champion Geoffrey Kirui in Kenmore Square to earn Japan's first Boston title since 1987 and the $150,000 first prize.

Wearing a white windbreaker that was drenched and billowing in the wind, Kirui slowed and stumbled across the Copley Square finish line in second, 2:25 back, followed by Shadrack Biwott and three other U.S. men. The winning time of 2:15:58 and was the slowest since Jack Fultz overcame temperatures in the high 90s to win in 1976.

"For me, it's the best conditions possible," said Kawauchi, who competed in 12 marathons last year -- six times the usual number for an elite runner -- and also works as a school administrator.

Runners donned hats and extra layers, and the lead packs tried to draft off the media truck to avoid the rain that was hitting them horizontally at times. Wheelchair winners Marcel Hug of Switzerland and American Tatyana McFadden, both five-time champions, said they were unable to see through the spray that spun off their wheels.

McFadden said she wore two jackets, with plastic bags between layers to stay dry, and hand warmers against her chest. The wet roads made it treacherous to turn and impossible to stop.

"I could start to feel my arms getting heavy just from all the rain soaking in," she said. "You can't put your brakes on right away, so you had to be tedious on the turns. I couldn't even see because the wind was so strong."

On the fifth anniversary of the finish line explosions that killed three and wounded hundreds more, Linden became the first U.S. woman to win since Lisa Larsen Weidenbach in 1985 -- before the race began offering prize money that lured the top international competitors to town.

Linden nearly ended the drought in 2011 when she was outkicked down Boylston Street and finished second by two seconds. This time she made the turn off of Hereford with a lead of more than half of a mile.

"Probably 2011 is what put the fear in me," Linden said. "That sprint battle is not super fun. It was nice to get it right down Boylston this time, that's for sure."

A 34-year-old California native who lives in Michigan, Linden said she was so broken by the weather that she wanted to drop out after a couple of miles but instead stuck around in case she could help one of her fellow Americans.

When four-time Olympian and reigning New York City Marathon champion Shalane Flanagan fell behind after needing a bathroom break, Linden let her draft so she could catch up to the pack. Later, she helped Molly Huddle reconnect with the group.

"Yeah, I'm in shock about that," she said. It was the second competitive marathon for Sellers, who was a distance runner at Weber State. 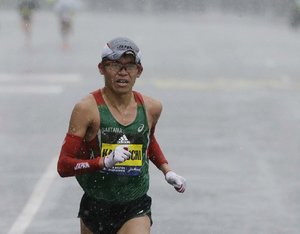 Photo by AP/STEVEN SENNE
Yuki Kawauchi of Japan was the men’s winner in Monday’s Boston Marathon. His winning time was 2 hours, 15 minutes, 58 seconds. He was the first Japanese man to win the race since 1987. 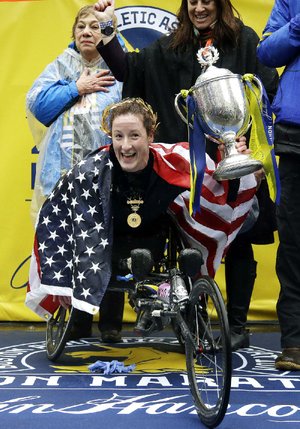