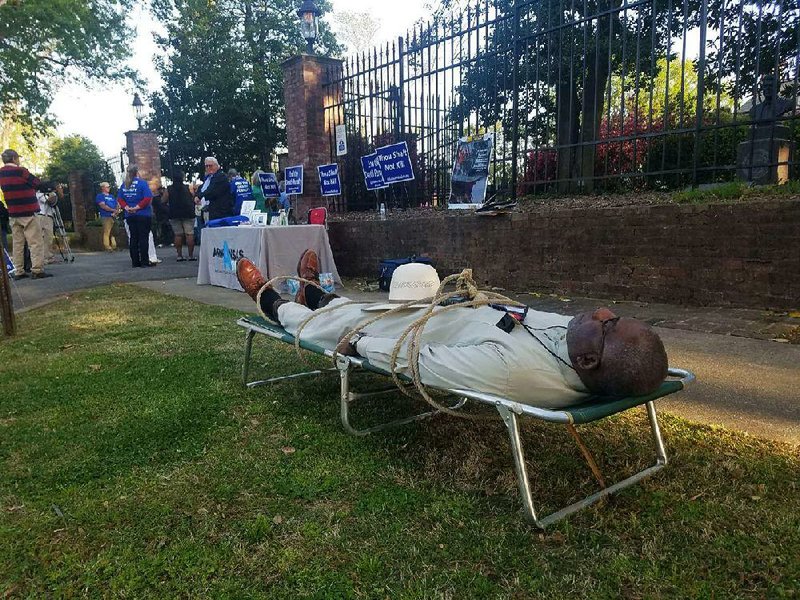 FILE — Pulaski County Circuit Judge Wendell Griffen lies on a cot outside the Governor’s Mansion during a vigil against capital punishment on April 17, 2018. Griffen did the same thing at an anti-capital-punishment rally last year and was subsequently barred by the state Supreme Court from hearing capital punishment cases.

A judge barred from presiding over death-penalty cases participated in a vigil Tuesday marking the four executions that the state carried out over a two-week period last year.

Just as he did at a rally last year, Pulaski County Circuit Judge Wendell Griffen lay motionless on a cot Tuesday evening outside the Governor's Mansion while about 40 opponents of capital punishment gathered nearby.

Griffen rose from the cot shortly after 7 p.m. after a man untangled the judge from a rope that loosely tied him to the green cot. Asked why he participated in the protest again and whether he was concerned with the perception, he gave the same answer twice.

"We are still killing," he said.

Griffen, who is also a Baptist minister, has sued the state's Supreme Court justices, claiming they violated his constitutional rights by banning him from hearing death-penalty cases in response to his participation on Good Friday last year in an anti-death-penalty rally on the steps of the state Capitol and later in a protest at the Governor's Mansion during which he lay on a cot "in solidarity" with Jesus.

Earlier that same day -- on April 14, 2017 -- Griffen had issued a temporary restraining order that prevented the state from using the drug vercuronium bromide in executions. The ruling was made in response to a lawsuit filed by the drug's manufacturer, which said the state had illegally obtained the drug.

Last week, a federal judge refused to dismiss the lawsuit against the seven justices of the Arkansas Supreme Court, but the high court itself was dismissed from the case.

Dozens of anti-death-penalty supporters gathered outside the northern gates of the Governor's Mansion as Griffen lay on the green cot.

Furonda Brasfield, executive director of the Arkansas Coalition to Abolish the Death Penalty, said the dozens of capital-punishment opponents gathered Tuesday to remember the lives lost last year and the victims of violent crime. The supporters, she said, also gathered to build resolve and commitment to their goal of abolishing the death penalty and replacing it with life without parole.

"It was like a roller-coaster ride, because there were so many stays and so many appeals," she said.

Brasfield thanked Griffen for standing up for his moral and religious beliefs against the death penalty, and said the group continues to have faith in Griffen as a judge who can make decisions based on the law and not on how he feels personally.