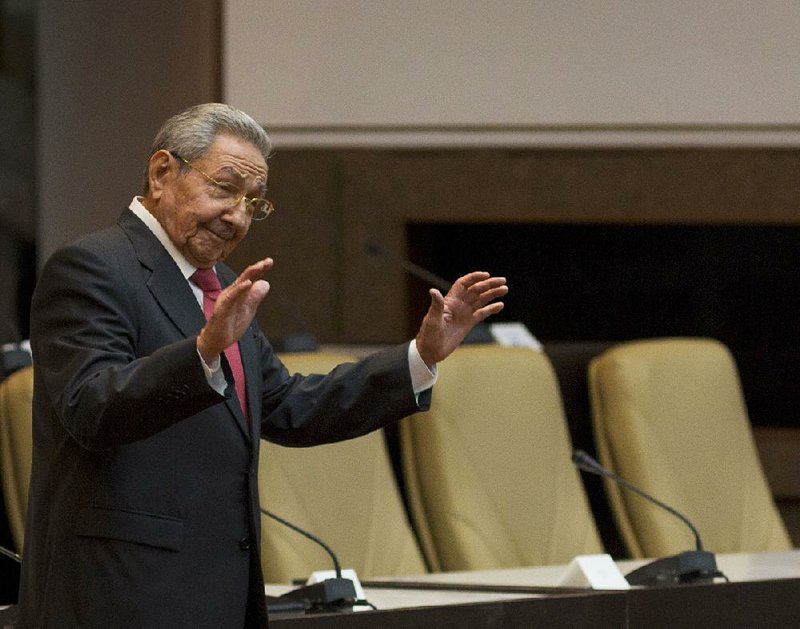 HAVANA -- In his first hour as Cuba's new head of state, Miguel Diaz-Canel made clear that while Raul Castro is no longer president, the longtime Communist leader is still the power to be reckoned with in this island nation.

"Raul ... will be key to the process of making the most important decisions on the future of the nation," Diaz-Canel, 57, said Thursday on the floor of Cuba's National Assembly after he was formally named the country's new head of state.

The National Assembly's procedure ended Castro rule after nearly 60 years, shifting power toward a younger generation born after Cuba's revolution. Yet everything about the transition Thursday suggested a path ahead of supremely cautious change with a heavy dose of continuity.

The new president, in his half-hour speech to the nation, pledged to preserve the island's communist system while gradually overhauling the economy and making the government more responsive to the people.

"The people have given this assembly the mandate to provide continuity to the Cuban Revolution during a crucial, historic moment that will be defined by all that we achieve in the advance of the modernization of our social and economic model," Diaz-Canel said.

Raul Castro, who took over from his older brother Fidel Castro in 2008, will remain the head of Cuba's powerful Communist Party. Insiders say he may leave Havana, moving to the southeastern city of Santiago, not far from the family farm where he and his brother grew up, and which Fidel later nationalized. Fidel Castro died in 2016 at age 90.

But any move to the countryside should not be seen as Raul Castro fading into the background.

He openly described the choice of Diaz-Canel as a hand-picked succession, calling him the only one of a group of politicians in their 50s who had risen to the occasion of top leadership.

"His election is not by chance," Castro said. "It was planned by us in group, and we decided that he's the best option in our opinion."

"When I'm gone, and that's in the future," Castro said, "he will assume as first secretary of the Communist Party, if he does a good job. That's how it's been planned."

Signaling changes to come, however, Castro said that in July, Cuba would create a new committee with the aim of revamping its constitution. The socialist character of Cuba, he said, would not change. But he acknowledged that "we thought, at this point, we would have advanced more" on the road toward greater economic overhauls.

"We haven't renounced the pursuit of private-sector work," he said.

Though highly symbolic for Cuba, the narrative of the end of the Castro era was largely played down here by state media, which sought to portray the transition as an exercise in continuity.

Diaz-Canel's name was put forward Wednesday as the sole candidate to head Cuba's Council of State, a post that effectively serves as the presidency. On Thursday, officials announced the results of the vote: 603 to 1 backing his nomination as Cuba's new leader. Diaz-Canel, a consensus-builder, is almost sure to make decisions in concert with the country's Communist brain trust.

At a time when a thaw in U.S.-Cuban relations under President Barack Obama has turned to winter under President Donald Trump, Diaz-Canel opened no immediate window in his speech for improved relations.

He said Cuba was, as always, prepared to negotiate with the United States but unwilling to cede to any of Washington's demands for internal change.

Instead, he paid homage to the Castro brothers, Raul and Fidel, as well as "the historic generation" of older revolutionaries who have run Cuba for the decades. He vowed to bring "continuity to the Cuban revolution," and talked of change, but always in the context of Cuban socialism.

"There is no room for those who aspire to a capitalist restoration," he said. "We will defend the revolution and continue to perfect socialism."

Always more open to change than his brother, Raul Castro leaves the presidency having set in motion an important period of political and economic overhauls to Cuba's one-party state -- including the introduction of term limits, the lifting of travel restrictions for Cubans and legalization of the sale of real estate.

But he left just as much undone, and Diaz-Canel is now poised to inherit a series of significant problems. He must confront the task of melding, for instance, Cuba's outdated and cumbersome two-currency system into one.

Last year, Cuba also put the brakes on the issuing of new licenses for small private businesses, mostly restaurants, taxi companies and small Airbnb operations aimed at the tourism industry. Cuban officials argued that they needed to ensure that such businesses were paying taxes and obeying the law.

But some observers said rank-and-file party officials also resented that upstart entrepreneurs were obtaining a higher standard of living than they could. It will be up to Diaz-Canel to find a balance between those in Cuba who are reluctant to embrace economic change and those who are clamoring for it.

"My guess is that he will follow the path of economic reform, because he has to," said John Caulfield, former chief of the U.S. Interests Section in Havana from 2011-14. "If he doesn't, he runs the risk of failure, of growing discontent. And he may have a honeymoon period where, if he wants to, he can get things done."

Information for this article was contributed by Anthony Faiola of The Washington Post and by Michael Weissenstein, Andrea Rodriguez and Ben Fox of The Associated Press.