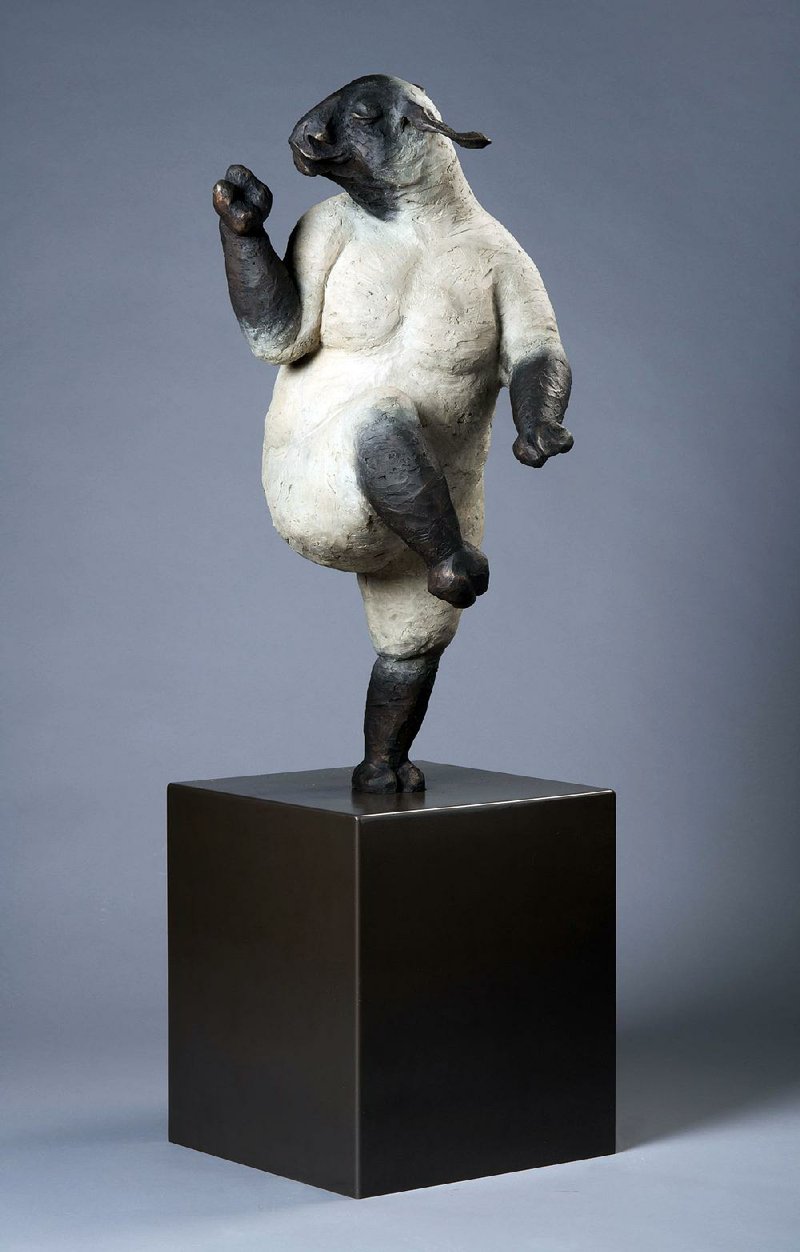 Part of Bliss and Glee by Giuseppe Palumbo

Stephen Shachtman has come back for more.

The Colorado artist won the 2017 Sculpture at the River Market commission competition for his piece A -- or, as he calls it, Arkansas A -- a steel and bronze sculpture that resembles the first letter of the alphabet and is being placed at the Southwest Community Center on Baseline Road in Little Rock.

Now he's back in competition with Golden, a proposed 20-foot tall, abstract sculpture, resembling a gold three-dimensional hopscotch diagram. He hopes to create it have have it placed in Riverfront Park.

He says, "There's a lot of positive and negative spaces" in Golden -- "almost looks like floating shapes in the sky. And I think without such a visual site and space, you wouldn't be able to get that."

Shachtman is one of three sculptors who has made it to the finals in a competition resulting in a $60,000 commissioned sculpture to take its place in the western section of the park.

Guests will have the opportunity to vote on the finalists' work at A Night in the Garden Where Sculpture Grows, 6:30-9 p.m. Thursday in the Vogel Schwartz Sculpture Garden and Riverview Room of the Little Rock Marriott.

The event will include heavy hors d'oeuvres and beverages; the Central High School Jazz Band will be playing, along with roving entertainers. Docents will be in the Sculpture Garden to give information about the sculptures. Partygoers will also have a chance to buy a limited number of sculptures from the three finalists.

Founded by city director Dr. Dean Kumpuris, Sculpture at the River Market is a nonprofit organization responsible for a collection of more than 90 pieces of public art, worth more than $4 million, in the Vogel Schwartz Sculpture Garden and other locations in the city. Sculpture at the River Market has held competitions for public art since 2011. Other past winners include Clay Enoch (2016) for United, installed at Central High School; Michael Warrick (2015) for Mockingbird Tree, installed at Chenal Parkway and Chenal Valley Drive; Lorri Acott (2014) for Peace, installed at Second and Main streets; and Ted Schaal (2013) for Open Window, installed in Riverfront Park.

Artists competing this year had to design "a visually interesting, safe, three-dimensional public art piece," according to the Sculpture in the Garden website.

The finalists -- interviewed by phone for this story -- were announced Feb. 19 via email notification. They had to prepare a presentation board of their art proposals; these boards will be on display at the party. At the end of the event, the proposal receiving the highest vote totals will be named the commission winner.

Shachtman, whose Red Monolith sculpture resides in Riverfront Park, couldn't pass up the opportunity to possibly place another piece of art there. His work, spanning two decades, has included curved textured metal -- hammered and in open mosaic patterns combined with glass -- as well as his current strong, rectangular shapes with circular pops of color.

A Night in the Garden Where Sculpture Grows

"I know the Vogel Schwartz Garden is just getting revamped and I was really interested in placing a large scale piece in that vicinity as well," he says. His proposed piece, he feels, would be ideal. "It's bigger than the Red Monolith; it's taller and wider than the Arkansas A. And I think for the site it fits really well, especially with kind of its medium as far as large-scale abstraction."

Finalist Carol Gold, a California-based artist, has been at her craft some 50 years, running a foundry with a friend for 12 of them. She has participated in the competition for a number of years. Her sculpture Fiesta, depicting two dancing women, is at Clinton Presidential Park.

Gold's preferred medium is wax, which is then cast in bronze. Her competition piece, Infinite Dance, is a figure of a lone woman, arms outstretched, one foot raised, the other resting on an open-circle base.

It's "one of my favorite pieces," Gold says. "To me the circle implies infinity. And the woman dancing on top of the circle is just a graceful figure."

ART WITH A SMILE

Gold isn't the only finalist whose work celebrates rhythmic movement. Third finalist Giuseppe Palumbo, who works from studios in California and Colorado, has proposed Bliss and Glee, whimsical sculptures of two merry sheep, dancing on their hind legs.

"Ultimately, I'm trying to create an experience," Palumbo says. "I sculpt a lot of different pieces, but what I've found is that people want to feel positive and happy. And if I can create that for somebody in a small way, that's my objective." The initial concept for the two-figure piece is one base; if chosen, he will consider separate bases if appropriate.

Palumbo has worked in a number of mediums, "and I enjoy all of them," he says. "I particularly love clay, and the earthiness of it -- just malleable in your hands ... I can get into a nearly meditative state working with it." After he works his magic with clay, his pieces are cast in bronze.

If he wins the competition, he says, Bliss and Glee will be a modest 4-and-a-half feet tall on a 12 to 18-inch base. "Then it will be interacting more with guests on a an eye level, and then the base could be utilized as a seating area."

He adds, "There's a fine line between these animals. You want to keep them welcoming and not menacing." 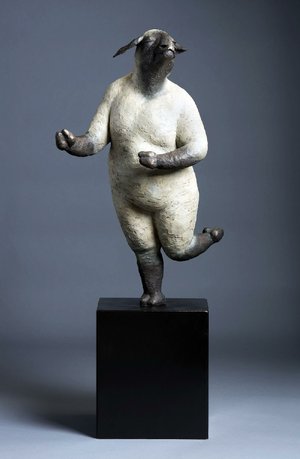 Part of Bliss and Glee by Giuseppe Palumbo 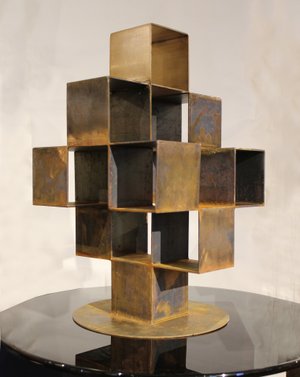 A maquette of Golden by Stephen Shachtman 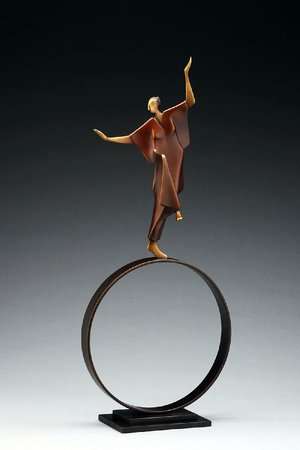 Print Headline: Art with vision: Three sculptors in competition for new creation to be placed in Little Rock