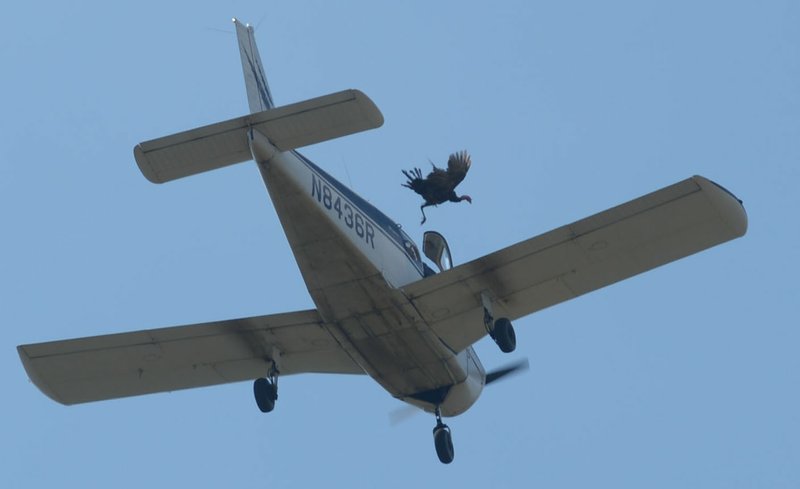 A wild turkey is released Saturday from a plane flying over Crooked Creek during the annual Turkey Trot in Yellville.

The Mid-Marion County Rotary Club has decided to sponsor the annual Turkey Trot festival this year in Yellville after another sponsor backed out.

The Rotary Club voted 16-6 on Monday to take over sponsorship, but only if no live turkeys are on the premises or dropped from airplanes, said Stan Duffy, president elect of the Rotary Club.

For about 50 years, "Phantom Pilots" have flown airplanes by the festival and released live turkeys. Most of the birds spread their wings and glide to the ground, but some of them don't open their wings and die on impact. The practice has incensed animal-welfare activists.

If a pilot flies by Turkey Trot this fall and drops turkeys from the sky, that will be the end of the festival, said Duffy.

The Yellville Area Chamber of Commerce had sponsored the festival for many years but announced on April 6 that it would no longer do so.

The festival and the attention it drew from animal-welfare activists had become detrimental to local businesses, according to a statement from the Chamber.

On Tuesday, a Nevada congresswoman said she wants her colleagues to ban the dropping of live turkeys from low-flying airplanes.

Democratic Rep. Dina Titus told the House Rules Committee that while the scene is reminiscent of a 1970s sitcom, maiming animals at the Yellville Turkey Trot is serious business.

Titus' amendment to a Federal Aviation Administration rules package was not sent to the House floor, and the congresswoman told The Associated Press on Wednesday she intends to raise the issue in a separate bill.