Arkansas elected officials' pay due to go up

The salaries of state government elected officials will increase by 3 percent later this year, barring some unforeseen issue arising during a two-week public comment period.

The raises -- for all constitutional officers, judges, prosecutors and lawmakers -- would cost more than $1.2 million annually, according to data compiled by the Arkansas auditor's office.

It would be the second-straight year that the Independent Citizens Commission, created by Amendment 94 to the Arkansas Constitution and approved by voters in 2014, granted pay bumps.

Lt. Gov. Tim Griffin was the only official left out of last year's 2 percent cost-of-living pay increase after he asked to be excluded, citing budgetary constraints and the need for more tax cuts.

The commission included Griffin in this year's raises, but he plans to again request that his pay remain unchanged.

"I respect and appreciate the commission's work but, consistent with my past practice, respectfully decline the recommended raise," he said through a spokesman Tuesday.

Commissioners approved the raises with little debate Tuesday morning. The body will now receive public comments for two weeks before drafting a resolution that will be sent to Auditor Andrea Lea. The raises will take effect 10 days after Lea receives the commission's resolution.

The commission approved raises in 2015 to get elected officials' salaries closer in line with the salaries of their counterparts in neighboring states. It declined to give any raises in 2016.

"Economies are doing better," commission member Stuart Hill said. "What I kind of hear, that salaries have been held back at the 2 percent and people are ready to give a little bit more."

Should the state's top elected officials and judges get a 3 percent raise?

Only officials from the judicial branch asked for the salary increases. Indeed, many legislators and constitutional officers reached Tuesday were unaware that they'd been granted raises.

"I would characterize our 3 percent primarily as a cost-of-living increase and maybe a modest salary increase," Branton said.

He said the issue of pay isn't a priority for most lawmakers.

State senators and representatives are paid $40,188 per year plus mileage and per diem for attending legislative meetings. If the raises are finalized, they'd each stand to receive an additional $1,206, bringing their yearly salaries to $41,394. The Senate president pro tempore and House speaker are paid slightly more. Their salaries would increase by $1,377 to $47,277.

The commission plans to set the per-diem and mileage-reimbursement rates at a September meeting.

Speaking as House majority leader, Rep. Marcus Richmond, R-Gravelly, said the increases may be helpful for some lawmakers who sacrifice time away from their day jobs.

But speaking as the House District 21 representative, Richmond said he'd have preferred no raise.

"When we're talking about the need to make every dollar go further, I just don't like the timing of it," he said, noting that he respects the process voters put in place.

Senate Minority Leader Keith Ingram, D-West Memphis, has opposed each of the recent pay increases. He said they're moving the General Assembly toward becoming a "full-time Legislature."

"I don't think the framers of our constitution saw this as a full-time job," he said, noting that it's easy for lawmakers to "lose touch" if they're not regularly interacting with the community.

Gov. Asa Hutchinson would receive a $4,315 raise, bringing his annual salary to $148,135. A spokesman said Hutchinson was unavailable for comment Tuesday.

"The Independent Citizens Commission was created by a statewide vote of the people to operate independently without undue influence from elected officials who may benefit from their decisions; therefore, I will not interfere with the decisions of the Commission," she said in a statement.

A spokesman for Secretary of State Mark Martin didn't respond to a comment request. Martin's salary would jump from $91,800 to $94,554.

"I appreciate the work of the Independent Citizens Commission that the voters created in 2014 to review the salaries of elected officials," Milligan said through a spokesman. "This proposal is just the first step in the process, and we'll just have to wait and see what happens after the public comment period is over. As I've said before, I didn't run for this office for the money, so regardless of whether the commission decides to increase it or not, I will still do all I can to make Arkansas a better place to work and live in."

Lea, the auditor, and Land Commissioner John Thurston receive the same salary amounts as Milligan, and they'd stand to receive an identical increase. Thurston didn't respond to a message requesting comment Tuesday, and Lea said she respects the commission's independence and will accept its recommendation.

Also at Tuesday's meeting, Kemp raised an issue about the pay of judges, which he said has become "compressed" in recent years.

Essentially, Kemp said the salaries of lower court judges have crept closer to those of courts considered to be higher, "despite the fact that each higher level comes with significantly more responsibility and territory to serve." For example, a circuit judge's salary is 96.1 percent of a Supreme Court justice's salary, Kemp noted in a letter to the commission.

Kemp said he didn't have any suggestions, "deferring to the wisdom of the commissioners to determine whether any potential solution should come in the form of additional salary, a mileage and/or per-diem allowance, or some combination." 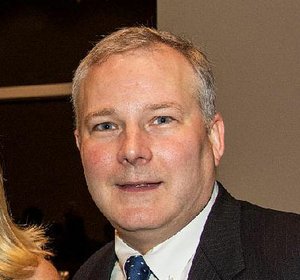 Photo by Cary Jenkins
Lt. Gov. Tim Griffin is shown in this photo. 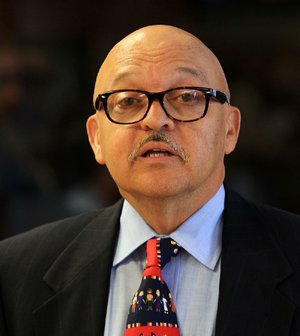 Print Headline: Elected officials' pay due to go up