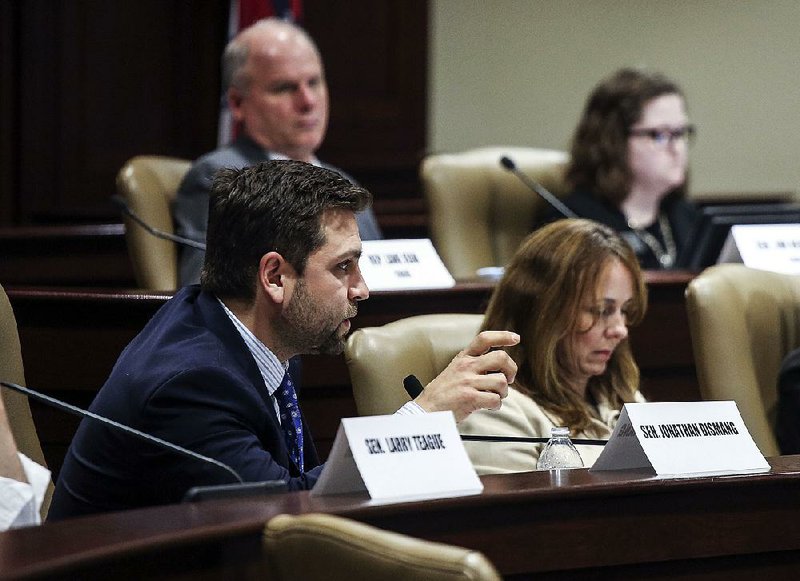 A panel of lawmakers decided Wednesday to take a closer look at the possibility of raising the state's sales tax on groceries and creating an income tax credit for low- and moderate-income people to offset the increase.

In a divided voice vote, the Arkansas Tax Reform and Relief Legislative Task Force approved a motion by a co-chairman, Rep. Lane Jean, R-Magnolia, to study these options for consideration in August.

Earlier in the meeting, the task force also approved a motion by Sen. Bart Hester, R-Cave Springs, that additional revenue raised by repealing tax exemptions, as recommended by the task force, be used for future tax cuts. Gov. Asa Hutchinson has said he wants to cut the state's top individual income tax rate, as was done for lower-income tax brackets.

Under state law, the task force must make recommendations to the General Assembly and Hutchinson by Sept. 1.

Asked if money raised by increasing the grocery sales tax would be used to pay for cutting income taxes, Jean said in an interview, "There is no plan right now.

"It could be partial [restoration of the sales tax on groceries]. It could be total. But that hasn't been determined yet," he told reporters. "I think you could tell none of this has been rehearsed."

The largest sales tax break that the task force voted Wednesday to study further is the one on groceries.

The grocery sales tax is expected to drop to 0.125 percent on Jan. 1 under a 2013 state law that uses the state's savings from ending its desegregation payments to three Pulaski County school districts. The reduced revenue from that cut to 0.125 percent is projected by the state to be about $68 million a year.

At the direction of then-Gov. Mike Beebe, a Democrat, the Legislature enacted laws that gradually cut the grocery sales tax from the standard level to 1.5 percent between 2007 and 2011. The state Department of Finance and Administration estimates that the 1.5 percent sales tax on groceries cut total revenue by $248.9 million in fiscal 2017 that ended June 30, including $190.6 million in state general revenue.

Sen. Jason Rapert, R-Bigelow, told the task force that he was "the prime sponsor" of the 2013 law that would open the door for the state's sales tax on groceries to be reduced from 1.5 percent to .0125 percent, effective Jan. 1.

"It was one of my own promises to see this [tax] removed. ... I see this as a fulfillment of a promise made personally and many of us made when we passed this law," he said.

Creating an earned income tax credit of 10 percent of the federal credit for a household with a combined annual income of $39,999 or less would cost about $70 million to $80 million a year, according to the proposal submitted to the task force. The proposal to create a refundable income tax credit didn't have a projected revenue impact.

Rapert said he hopes the task force would consider the "doughnut holes that may be out there on either end of the thing."

"I have people in my district that are on fixed income, some of them are widows or widowers, and I don't feel comfortable going back on a promise that I made and see them have to suddenly have tax on their bread and their milk that we knew was coming off," he said.

In February, Hutchinson told lawmakers that he plans to ask them to reduce the state's top individual income tax rate from 6.9 percent to 6 percent, and he projected that the tax cut would reduce revenue by $180 million.

In 2015 and 2017, the Republican-dominated Legislature approved the Republican governor's plan to cut individual income tax rates for Arkansans with up to $75,000 a year in taxable income. The state projected those tax cuts would collectively reduce revenue by about $150 million a year.

Sen. Joyce Elliott, D-Little Rock, said: "I think it's really important that people understand this motion is not saying we are about [to repeal the reduced sales tax on groceries]. We're about to have a discussion.

"We could whip ourselves up into a frenzy if we don't really relay that in the spirit that the motion is meant, I would assume," she said.

"I just wanted folks out there to understand most of us have issues with the grocery tax on food. We're also trying to find some way, though, to make sure that the people who are hurting the most can get an earned income tax credit," Elliott said.

A task force co-chairman, Sen. Jim Hendren, R-Sulphur Springs, said, "Many of these items ... are controversial, but studying them should not be controversial.

"In fact, it is our responsibility," he said.

Last month, the task force whittled to about 43 the list of sales tax exemptions that any of its members wanted to study further.

During its nearly seven-hour meeting Wednesday, the task force reviewed more than half of those exemptions and decided to give additional study to six of them, including the reduced sales tax on groceries.

Among the other exemptions for further study are the back-to-school tax holiday for school supplies, clothing and clothing accessories; services provided by coin-operated carwashes; and sales of four-wheelers and all-terrain vehicles for farm use.

The task force plans to try to complete its review of sales tax exemptions today, after it reviews the state's income tax code. 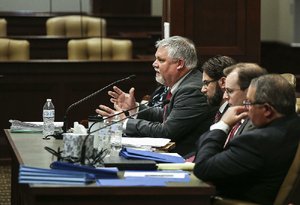 Photo by Mitchell PE Masilun
J.D. Harper, executive director of the Arkansas Manufactured Housing Association, answers a question Wednesday from a panel of legislators during a meeting on possible changes in the state tax system.