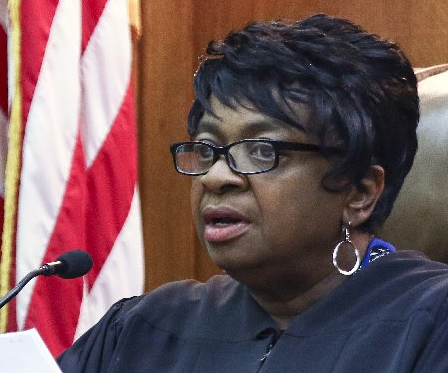 Arkansas' new voter-identification law is on hold for now, thanks to a judge's ruling Thursday evening.

Since August, voters have been required to show government-approved photo identification to poll workers to ensure their ballots are counted. Pulaski County Circuit Judge Alice Gray on Thursday ruled that the way the General Assembly created the requirement was by inserting an unsupportable contradiction into the state constitution, which sets the standards for voter eligibility and regulates the registration process.

Her 57-page order bars further enforcement of the ID requirement, Act 633 of 2017, at least until a full trial on the question of its legality can be conducted. The ruling is in response to a February lawsuit by poll worker Barry Haas that was supplemented by a seven-hour hearing in March. Early voting for the May 22 primary and judicial elections begins May 7. Haas contended his right to vote would be illegally impeded by the law.

"[Haas] is faced with the choice of complying with the unconstitutional requirements imposed by Act 633, or not having his ballot counted during the May 2018 preferential primary," Gray wrote. "The court finds that this is not really a choice at all, and that irreparable harm would result to [Haas] in the absence of a preliminary injunction, as his ballot will not be counted."

Jeff Priebe, Haas' attorney, said they are still reviewing the ruling but so far they're content.

"We're very pleased with the court's very well reasoned and very thorough opinion," Priebe said. "And we're glad the court has protected the voting rights of all Arkansans -- the old and the young, the rich and the poor -- for the primary election."

The defendants were Secretary of State Mark Martin and the six-member state Board of Election Commissioners. They can appeal the order or ask the Arkansas Supreme Court to stay it, continuing the ID requirement. Their representatives could not say Thursday night how they would respond.

Martin's spokesman, Chris Powell, declined to comment because the office was reviewing the ruling. The secretary of state's office oversees elections. A spokesman for Attorney General Leslie Rutledge, who represented the election commissioners, said Rutledge is considering her next move.

"The attorney general is disappointed with Judge Gray's decision and is reviewing the order to consider appropriate next steps," said Nicole Ryan, communications director at Rutledge's office.

The law was the Arkansas Legislature's second try at a voter-ID law. The first attempt was struck down by another circuit judge and then, on appeal, unanimously nullified by the state Supreme Court more than three years ago.

Rep. Mark Lowery, R-Maumelle, who sponsored the bill that became Act 633, said the measure had been carefully crafted to be distinctly different from that previous voter-ID law. But he said he wasn't surprised by Gray's ruling. He predicts the Supreme Court will overturn her decision and validate the new law.

"I think it took her so long to issue her ruling because she had to find a way to ignore the law and the Legislature's constitutional right to amend Amendment 51 of the constitution," he said.

Voter applicants are not required to show any photograph when they first register. And, so far, none of the courts has reached a conclusion as to whether, on its own, a photo ID requirement is illegal. Like Gray on Thursday, the courts have found that the way lawmakers enacted the requirement has violated the constitution.

In October 2014, a four-member majority of the Supreme Court found that the first ID law had improperly added a new qualification to the voter standards that are controlled by the constitution. The three-member minority concluded that lawmakers did not have enough votes to change the voter-registration process in the constitution.

Like the courts before her, Gray ruled lawmakers made the ID requirement into an additional voter qualification. But the qualifications -- age, residency and eligibility -- cannot be expanded the way the Legislature did, she stated in her decision.

Lawmakers had used Act 633 to insert the identification requirement into Amendment 51, which controls the voter registration process. That's the wrong place in the constitution to add voter qualifications, the judge's ruling states.

Proponents of Act 633 have defended it as an important safeguard for election integrity and to discourage fraud. They've been critical of the lawsuit's timing, with the May primaries looming.

Republican Gov. Asa Hutchinson signed the ID requirement into law in March 2017 and it went into effect in August. The Haas suit was filed in February, and the secretary of state's office had been pushing Gray to make her decision ahead of an April 6 deadline to mail out absentee ballots to overseas and military voters.

State attorneys even petitioned the Supreme Court to intervene and order Gray to make her ruling, but the justices declined to intervene. Her ruling comes three weeks after that deadline.