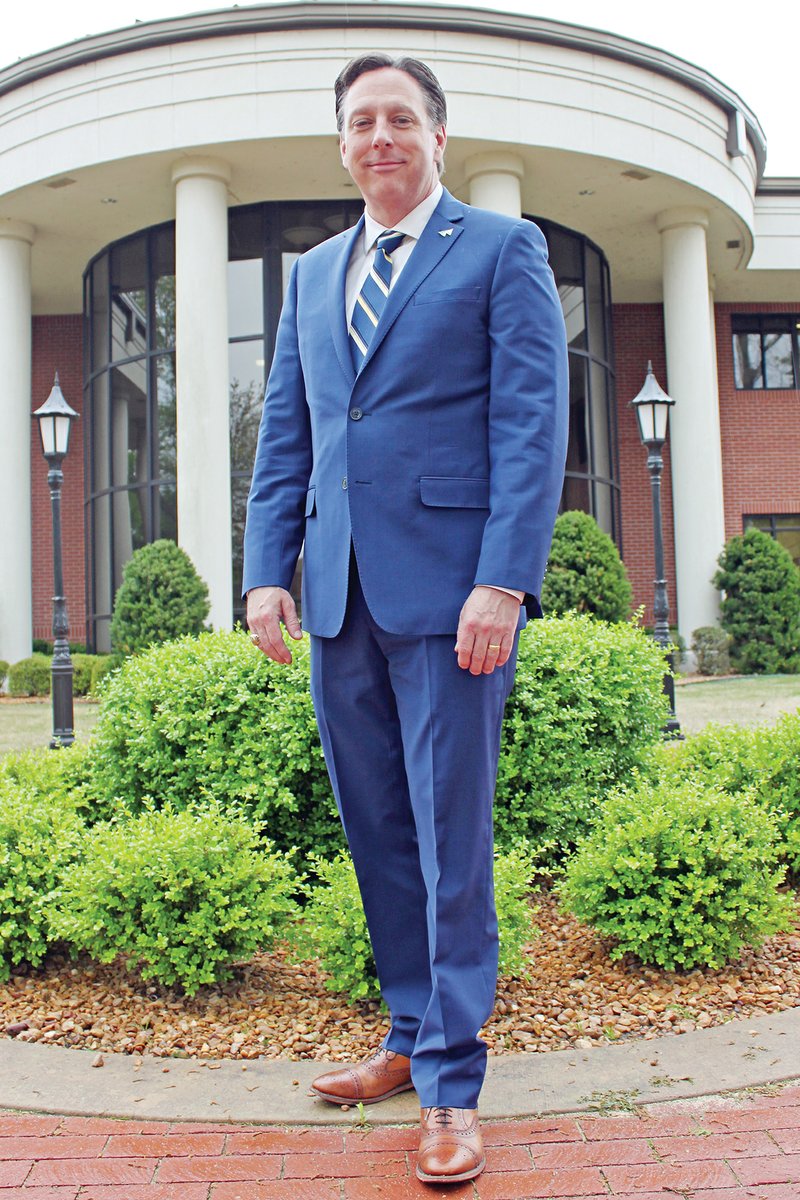 Stan Norman was recently hired as the president of Williams Baptist College. Norman started his new position April 1. He was previously in higher-education administration at Oklahoma Baptist University in Shawnee.

Norman, who left Oklahoma Baptist University in Shawnee as provost and executive vice president, started at Williams Baptist on April 1. He worked at Oklahoma Baptist for nine years before taking the job at the Walnut Ridge college.

“There are good people who do a really incredible job here,” Norman said. “I want as many students as possible to be exposed to that. This is a wonderful place to launch a life. Because of what I believe about that, I want to get as many students here as I can to launch their lives as well.”

Norman said that in his time at Oklahoma Baptist, he saw enrollment jump from 1,500 to more than 2,100. Right now, Williams Baptist has around 500 students.

“There have been times when they’ve been close to 1,000 themselves,” Norman said, “but it’s about a fourth of the size of OBU.”

Norman said that during his time at Oklahoma Baptist, it was being recognized more than just in its area of Oklahoma.

“The Lord was gracious to us in our time at Oklahoma Baptist,” he said. “We were going from being known regionally in a certain locale to then growing throughout the state and beyond. I would like to see that replicated and even more here at Williams.

“Because our mission and total part of life are being transformed, I want more students here. I want to influence them and the opportunity for this place to grow, certainly through the northeast Arkansas region, but even more throughout the state of Arkansas and beyond.”

According to the Williams Baptist website, “Williams’ mission is to provide an excellent, holistically Christian, liberal arts education, while compassionately shaping students’ lives. … Williams’ vision is to produce exceptional graduates prepared to engage local and global cultures through a Christ-centered worldview.”

“I began to explore curriculum and explore other parts of the university to see if that mission had a defining value and what the university was doing, and it did,” Norman said. “Because of what I believe about the mission of the university, I believe that there are many more students who could benefit from what happens at Williams. We give an incredibly outstanding education. I don’t think the state of Arkansas realizes the quality of educational experience that occurs here. But a university is not just a place where students go to get a great education. We want them to get a degree, but a university is where many of these kids launch a life.”

Norman said he was contacted by Williams Baptist Department of Fine Arts Chairman Bob McGee about being a candidate for the president’s position. McGee was on the search committee.

“I had known about Williams for a long time,” Norman said. “In Baptist higher education, you get a sense of all the schools. I had friends and colleagues over the years work here in various capacities. It wasn’t really on my radar.”

After being contacted by McGee, saying he was nominated for the position, Norman said he would talk to his wife, Joy, and pray about it.

“We did that, and I got back in touch with him and agreed that I would enter into the process,” Norman said. “That was probably middle to late January.”

Norman had a telephone interview with the search committee, then made two trips to Walnut Ridge for formal interviews before being hired for the position in late March.

“Probably the thing as a Christian I would say is that there was God’s provincial guiding in all this,” he said. “The way it was expressed was foremost through the people that we met. My wife and I have commented over and over how winsome and warm and endearing the members of the search committee were. At first, you’re thinking that they are putting their best foot forward, as am I, to make a good impression.

“This was not just a best foot forward. This is really who they are. We were very moved and drawn to the people who really love this school deeply, who are warm and loving and encouraging. Those things were significant factors in God’s calling and his purpose for me coming here.”

Williams Baptist is owned and operated by the Arkansas State Baptist Convention, which is headquartered in Little Rock. Executive Director J.D. Tucker said he is pleased with the hiring of Norman.

“Personally, I’m very excited about Stan,” Tucker said. “I think he’s an incredible find for the school. This guy is just a lot of fun. He’s a delightful person.

Tucker said Williams Baptist is already on a good roll.

“They’ve got great momentum, and Stan will keep the momentum going,” Tucker said. “Then he’ll bring his nuances and his skill sets to bear. I think you’ll see incredible things happen at Williams Baptist.”

Norman is originally from Durant, Oklahoma. He attended Southeastern Oklahoma State University for two years before finishing his undergraduate degree at Criswell College in Dallas. He earned a Master of Divinity degree and a doctorate in systematic theology from Southwestern Baptist Theological Seminary in Fort Worth, Texas.

“My early career, I started out as a pastor,” Norman said. “I served three different churches while I was working on my education. During my education time, I sensed God moving toward a professorial type of life. Upon completing my doctorate degree, I began to teach.”

He taught a year at Criswell, then went to Charleston Southern University. He taught nine years at New Orleans Baptist Theological Seminary.

“During the latter part of my time there, again, sensing a redirection and growth, I began to move into the dark side of higher education — administration,” Norman said. “I left New Orleans and went to Southwest Baptist University in Bolivar, Missouri.”

While at Southwest Baptist, Norman served on the executive leadership team as a vice president for three years.

“Then I moved to Oklahoma Baptist as a provost and executive vice president,” he said. “My duties there were a lot — chief academic officer; I also provided supervision for athletics, student life, spiritual life, enrollment management and, early on, marketing and community relations.”

While being Williams Baptist College president for less than a month, Norman said, things have been overwhelming.

“The tenacity of the different people that have been here for the years — it’s a great legacy. It’s been being able to overcome things — not only to confront challenges but overcome them.”

Norman said he is still fleshing out his vision on how he wants to lead the school and plans to be at Williams Baptist for a long time.

“But as far as I know, to the best of my ability, I’m here until I’m not,” he said. “I’m here until I retire or until the Lord takes me home. I’m looking at investing my life in, hopefully, modeling this tenacious, sacrificial longtime kind of service that others have done before me have. Being a president becomes more complex with each passing day.

“Enduring long-term presidencies become rarer and rarer, and I realize that. But I’m committed to staying in the saddle and riding this out for as long and to the degree that I can. The kinds of things that I sense God is wanting me to do here are going to require long-term commitment. My wife and I are both here to see what God has called us to do. We’re here to see it come to fruition.”

An exciting thing that Norman said he sees happening at Williams Baptist is its transition from college to university status.

“Most of that work had been done prior to my arrival,” Norman said. “This summer is when the public naming [to Williams Baptist University] will happen. I’m delighted to be a part of that story.”

In addition, Norman said, he thinks the change to a university will help with enrollment.

“No. 1, most students who go to college want to graduate from an institution that is a university,” he said. “I do believe that is a factor in some students’ selection of where they go.

“Secondly, I think it also indicates the expansion and growth of our identity and missions. So now we’re offering graduate-level programs and graduate degrees. Being a university is a reflection of that commitment to graduate education.”