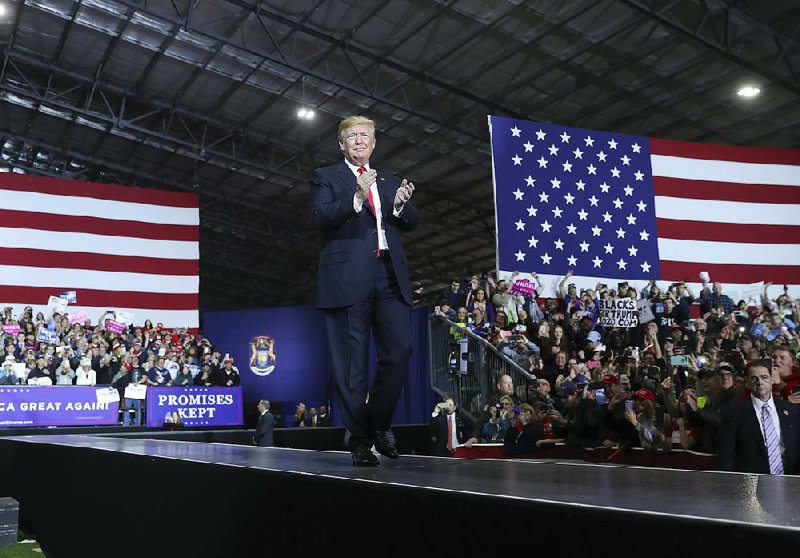 WASHINGTON TOWNSHIP, Mich. -- President Donald Trump touted his economic and diplomatic accomplishments and criticized the media during a rally Saturday before thousands of supporters in a state that is critical to his re-election hopes.

The campaign-style event held at the Total Sports Park was billed as counter-programming to the annual White House Correspondents' Association dinner in Washington, which the president skipped for the second year.

"You may have heard I was invited to another event tonight," the president told a crowd that began gathering under cloudy skies hours before the scheduled 7 p.m. Eastern time kickoff. "I'd much rather be in Washington, Mich., than Washington, D.C."

He also kept up his criticisms of Sen. Jon Tester, D-Mont., a leading critic of Trump's nominee to lead the Department of Veterans Affairs, accusing Tester of a smear campaign and repeating calls for him to resign.

Trump has been urging voters to support Republicans for Congress as a way of advancing his agenda. In the rally, he repeatedly pointed to Sen. Debbie Stabenow of Michigan as one of the Democrats who needed to be voted out.

After saying Stabenow was standing in the way of protecting U.S. borders and had voted against tax cuts, Trump said: "And you people just keep putting her back again and again and again. It's your fault."

The president also complained that the media had not given him sufficient credit for making possible Friday's meeting between leaders of the two Koreas, saying he had "everything" to do with it.

He predicted that he would achieve the "all-time record" for appointing conservative judges and boasted that his tax and economic policies were working.

"Let me tell you: Our country is doing great," he said.

Trump conceded that the stock market, which peaked in January and has gone sideways since then, has been hurt by his tough "America First" trade policies. But he said it was necessary to push China for concessions.

"I can't let other countries take advantage of us," he said to cheers.

The rally, about 40 miles north of Detroit, capped a week that included visits from French President Emmanuel Macron and German Chancellor Angela Merkel as well as controversy involving several members of his Cabinet.

Since Trump took office, the U.S. economy has added 2.7 million jobs -- an average of 181,000 per month -- while growth was fastest in counties that gave Trump the most votes, according to a Washington Post analysis of U.S. Labor Department data.

On Saturday morning, the president previewed his appearance in the state by celebrating Michigan's recent performance.

"Major business expansion and jobs pouring into your State. Auto companies expanding at record pace," he wrote on Twitter.

Still, Michigan's total employment grew a bit less over the past year than the national average, and its factories added jobs at only a quarter of the national pace, according to Labor Department statistics.

Trump's visit reflected the state's role in his 2016 triumph and in his prospects for re-election. Washington Township is in Macomb County, traditional home to the "Reagan Democrats" who helped Trump eke out a Michigan win by fewer than 11,000 votes.

The blue-collar voters who abandoned the Democratic Party for Ronald Reagan have proved intriguingly movable. Democrat Barack Obama won the county twice in his White House runs, then Trump carried it by more than 11 percentage points.

The township is 93 percent white and significantly more affluent than the county as a whole, according to the U.S. Census Bureau.

As the crowd waited for the president to arrive, Michelle Kalil, 52, a physical therapist, praised Trump for reviving the economy.

"I got some more money in my paycheck," she said. " I think he's doing an amazing job and I'm glad he's sticking to his guns."

Trump's campaign said in a statement that the rally was in "a completely different Washington" than the nation's capital, where "the fake news media will be celebrating themselves with the denizens of Washington society in the swamp."

Trump also skipped the annual dinner last year, citing his animosity toward the media. But this year, he encouraged members of his administration to attend, and press secretary Sarah Huckabee Sanders plans to "represent the administration" at the head table, said Margaret Talev, president of the White House Correspondents' Association.

Trump is the first president to skip the dinner since Ronald Reagan, who missed it in 1981 while recovering from his wounds after an attempted assassination.

Information for this article was contributed by Rachel Chason, David J. Lynch and Trevor Bach of The Washington Post; and by Kevin Freking of The Associated Press.