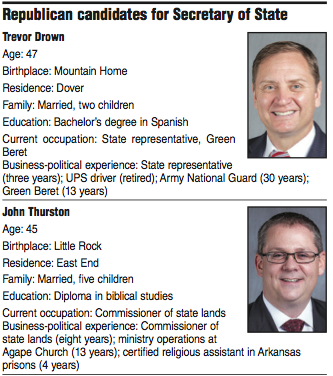 Information about the Republican candidates for Secretary of State

The two Republicans running to represent the GOP in the November race to replace Secretary of State Mark Martin are selling the same thing -- experience.

John Thurston, the current commissioner of state lands, points to his eight years at the helm of that office.

Trevor Drown, the District 68 state representative, highlights his past as a small-business owner and member of the U.S. Army Special Forces.

Their pasts, both argue, suit them well to succeed Martin, who is term-limited.

"I respect the other candidates' expertise, their experiences in life, but I feel that I have the most experience in running a constitutional office," said Thurston, 45, of the East End community in Saline County.

The winner in the May 22 primary will face Democrat Susan Inman of Little Rock and Libertarian Christopher Olson of Viola in the Nov. 6 general election.

The secretary of state's office oversees elections, maintains the state Capitol grounds and processes a number of services for businesses. The next secretary of state also will sit on the state Board of Apportionment -- alongside the attorney general and governor -- to redraw the state legislative district boundaries after the 2020 U.S. census.

Both Republican candidates conceded that gerrymandering, or drawing district lines in a manner that favors a particular candidate or party, has occurred in the past, but they each pledged to draw the lines in a sensible, nonpartisan way.

Thurston said the next Board of Apportionment was likely to be the first majority-Republican board, adding it had a responsibility to get the district lines right. He said that, if elected, he plans to begin contacting legislators, county officials and other stakeholders immediately after taking office to start planning the redistricting process.

"Arkansans gave Republicans a chance to govern beginning in 2010 -- the Republican wave if you will," Thurston said. "And after election night in 2010, I knew the state of Arkansas had given us an opportunity to serve. It has been my goal to show and demonstrate that Republicans can govern. That's how I plan to go into the redistricting process -- to show Arkansans that yes, we can draw lines that make sense. That are fair to the voters. That keep communities together."

Drown pointed to the odd shape of his own House district as proof of nonsensical boundaries. He said he's familiar with software that can generate district lines that are simple and straightforward.

"It can be done in a way that people have faith in the process again," Drown said. "Because I can tell you as a legislator, talking to both Democrats and Republicans in my district, they don't like the way the lines are drawn."

House District 68 stretches from the east side of Van Buren County to the west side of Pope County. It's narrow in the middle.

Asked about a proposal to dissolve the Board of Apportionment and create an independent commission to draw legislative lines, both candidates answered similarly.

"It's funny how that was a good system until the Republicans took over, and then all the sudden, we want to change it," Drown said. "That's how I look at. A commission is not elected by the people. Those three constitutional officers are elected by the people, and the people elected them with the understanding that they'd work on behalf of the people -- not somebody who was appointed and doesn't really answer to the people themselves."

"I find it interesting that now that it appears Republicans may have a chance to draw the lines for the first time, all the sudden we're having this discussion to take it away from the Board of Apportionment," he said. "The notion of having an independent council or board is just not accurate because there's no such thing as an individual council or board because they're appointed by someone. So whoever is appointing is the one who has the say, in my opinion. I think the voters have the opportunity to say who they want as governor, as attorney general and as secretary of state, and therefore the people have a say."

Both men's political origin stories are similar. Neither had long planned their 2010 leaps into the public arena.

Thurston spent 13 years in ministry operations at Agape Church in Little Rock, and he said he ran for land commissioner to serve Arkansans.

Drown spent the better part of three decades in the Army National Guard and as a UPS driver. He and his wife also ran a restaurant coffee and tea supply company.

He ran unsuccessfully as an independent for U.S. Senate in 2010, but Drown said he was the first independent Senate candidate in Arkansas to gather enough signatures to appear on the ballot in the past 50 years. He was elected as a Republican to the state House of Representatives in 2014.

Each time he's run for office, Drown said, was because someone asked him to run, even this run for secretary of state. He had planned to continue running for his House seat, but he said people consistently approached him about running for Martin's office.

The candidates are both supportive of the state's voter-ID law that a Pulaski County judge on Thursday struck down as unconstitutional. Martin said Friday that the state will appeal the ruling.

Both emphasized the importance of finding funding to help counties, particularly those in rural areas, purchase new voting equipment.

Drown said he's been working with Martin's office on the issue as chairman of House's elections subcommittee.

Thurston promised to work tirelessly to secure funding for updated equipment, adding that he'd like to see a permanent funding mechanism put in place.

"I will get the funding whether it be by lowering the price by opening the bidding once again to competitive bidding, budgeting, or camping out on the governor's step," Thurston said. "Elections are the bedrock of our republic."

Both candidates commended Martin for how he handled the request from President Donald Trump's administration for Arkansas' voter data last year.

They both said they would have released the information as well because it's available under the Arkansas Freedom of Information Act.

Drown said his military career uniquely positioned him to oversee the security of the state Capitol grounds. It was his and his fellow soldiers' duty to secure areas of similar size.

"It's a perfect fit; I've done it all over the world," Drown said.

Thurston said he'd like to increase state Capitol police officers' access to SWAT gear and "adequate firepower" to ensure they were properly equipped in an active-shooter situation.

Both candidates said the race has been amicable, but they did exchange jabs over their Republican credentials. Drown noted Thurston's spotty voting history, particularly that he didn't vote in a Republican primary until he was on the ticket in 2010. Thurston also didn't vote in the 2006 or 2008 general elections, according to his voting history.

Thurston admitted that he wasn't as engaged of a voter as he should've been or wanted to be, but he also said his main concern in the 2000s was the care of his wife, who died in 2007 after a bout with cancer.

"I am running on my record as the land commissioner for the past eight years, and it is a record I am proud of and hope the voters will judge me on, rather than my participation or lack thereof during periods I was the primary caregiver," Thurston said.

Thurston rebutted that Drown ran against U.S. Sen. John Boozman, R-Rogers, as an independent in 2010. He pointed to a video interview Drown gave during that campaign, in which Drown said he'd always considered himself an independent.

"Why did he have a conversion to a Republican in 2014 after running against Sen. John Boozman as an independent in 2010?" Thurston said.

"He made clear in that race he had never considered himself to be a Republican, but when it became expedient to run for office again, he suddenly decided he was a Republican."

Drown said he's always voted for and supported Republican candidates, but he didn't officially join the Republican Party until 2013.

"At least I was voting," Drown said.

He said he ran as an independent in 2010 because the Republican field was so crowded. Additionally, he said, Boozman hadn't yet announced his intentions to run.

"I've always been a supporter of his, and if he had been in at the time, I would've declined [to run]," he said.

He said he continued his campaign because he'd already made a commitment to the 15,000 people who submitted signatures in support of his candidacy, and he didn't want to quit on them.

Both Thurston and Drown said they'd support the winner of their race in November's general election.