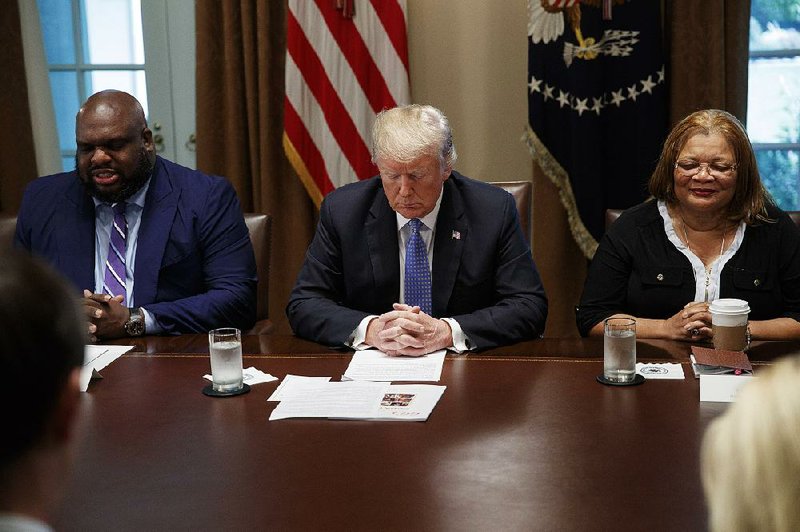 By the time Sessions spoke, Trump's message was one of the top stories on cable news channels. White House officials later defended the comment, portraying it as a presidential opinion, not an order.

Trump's tweet, which was posted at 8:24 a.m., stated: "This is a terrible situation and Attorney General Jeff Sessions should stop this Rigged Witch Hunt right now, before it continues to stain our country any further. Bob Mueller is totally conflicted, and his 17 Angry Democrats that are doing his dirty work are a disgrace to USA!"

The president has repeatedly complained that many of the Mueller investigators are registered Democrats. He has also repeatedly questioned Mueller's motives, despite Mueller's past Republican ties.

On Wednesday, Trump said Mueller is trying to create "the illusion of objectivity." Claims of collusion between the Trump campaign and the Russians are a "TOTAL HOAX," he said via Twitter.

Sessions, a former U.S. senator from Alabama, did not take questions from Arkansas reporters. But in a speech in Little Rock, he appeared to joke about the difference between presidential suggestions and commands.

"The day I was sworn in as attorney general, President Trump sent me a clear order. And, let me tell you, Donald Trump knows how to give a clear order. He told me to reduce crime in America," Sessions said.

"It's not an order. It's the president's opinion," she said. "It's ridiculous that -- all of the corruption and dishonesty that's gone on with the launching of the witch hunt. The president wants to -- has watched this process play out, but he also wants to see it come to an end, as he stated many times."

U.S. Rep. Bruce Westerman, R-Ark., who appeared with Sessions at a round-table discussion in Garland County, said the topic of Trump's tweet wasn't raised during that meeting.

"I obviously didn't talk to Attorney General Sessions about that. I haven't seen the president's tweet but I know there's differing ideas on the investigation. ... We'll let that play out and hopefully the wheels of justice will turn and everything will work itself out," he said.

Asked if Trump's appeal was appropriate, Westerman said: "That's the president's prerogative. The attorney general works for the president so I guess he can ask whatever he chooses to ask."

U.S. Rep. Rick Crawford, a Republican from Jonesboro who serves on the House Intelligence Committee, said Trump's dissatisfaction with Mueller's probe is shared by others.

"We see sort of an attitude out of the Department of Justice that they're really not subject to any kind of oversight and they'll do things the way they want to do it and they don't like to provide answers to Congress," he said. "This whole thing has really kind of tried my patience, and I think the patience of my constituents. And anybody who is watching this probably can sense that."

There's no evidence of collusion between the Trump campaign and the Russians, Crawford said.

"Either bring forth some evidence and charge people or it's time to shut it down," he said.

So far, the investigation has resulted in five guilty pleas and indictments of 32 people, some of whom are Russians, and three Russian companies.

"The president is prone to exaggerate," the Republican from Rogers said.

But, he said, he hopes the process doesn't drag out.

"I want a very thorough investigation. I want it to go forward. We're a nation of laws. No one is above the law. ... We need to be thorough, but let's do all that we can to try to get it behind us as quickly as possible. Not only for the president but for the good of the country," Boozman added.

"He has recused from the matter to begin with so he couldn't take any action relative to it," the Republican from Dardanelle said.

"I think what's best for not only the president but for our country, is that the special counsel, Robert Mueller ... reaches the conclusion where the facts take him as quickly as he can, bring matters to trial if he thinks it warrants criminal charges as he's prosecuting this week and to put this matter behind us," Cotton added.

Mueller indicated this week that he is willing to reduce the number of questions his investigators would pose to Trump in an interview, renewing negotiations with Trump's lawyers about a presidential sit-down after an extended standoff, according to two people briefed on the negotiations.