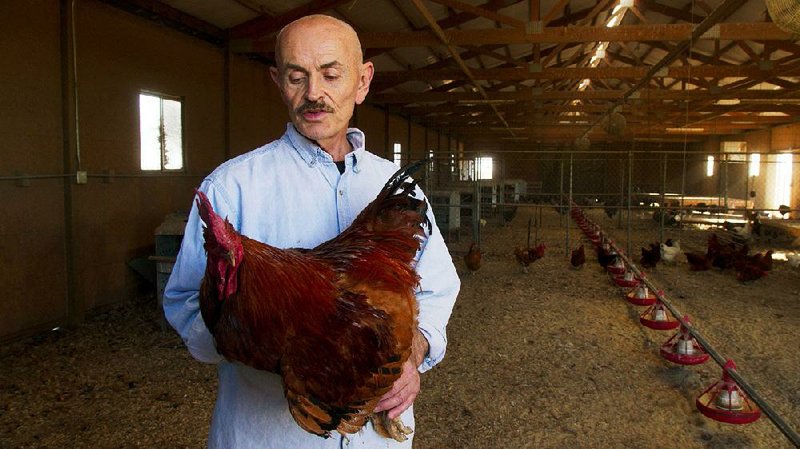 William Burroughs once explained the meaning of the title of Naked Lunch as referring to "the frozen moment when everyone sees what is on the end of every fork." We are sustained by death, by the consumption of other organisms. Even vegans must deal with the idea of sentient plants. We all make our own accommodations.

The makers of Eating Animals, a documentary directed by Christopher Dillon Quinn and based somewhat loosely on novelist Jonathan Safran Foer's 2009 nonfiction examination of the morality of eating meat in an industrialized world, know they aren't telling us anything we don't know. Instead they're insisting that we acknowledge what we would rather not admit. That there are ramifications to our habits, that factory farms are cruel. And that our appetites force this cruelty.

We bio-engineer animals to deliver maximum meat, resulting in creatures unsuitable for living in any kind of natural manner. We have made chickens that cannot stand on their own, cows that are simultaneously hugely fat and malnourished and that must be carried about on forklifts. We grow animals that are distorted and monstrous, who never see the sun, who never develop an immune system (which necessitates their dousing with antibiotics which, in turn, accelerates the development of drug-resistant bacteria).

Natalie Portman, who narrates the documentary along with Foer, coolly notes that we've "calculated how close to death we can keep an animal without killing it." We keep it just alive enough to make it grow.

Yet this is not a harangue, for the film empathizes with the carnivore impulse. Portman was a vegetarian who became a vegan activist after reading Foer's book, but the aim here is not to convince meat eaters to stop. (Which has led to it being criticized as a cop-out by some in the vegan community who consider mere mindfulness about one's meat consumption pretty weak tea.)

In fact, it finds, in a handful of farmers who have avoided the industrial farming system, the closest thing it offers to heroes. These are farmers who have complex and freighted relationships with their animals, who nurture and care for them. Frank Reese of Kansas raises chickens and turkeys that roam free.

"There's no way you can love an animal that's been genetically engineered to die in six weeks," he says.

Another farmer, Paul Willis of Iowa, does seem to love his handsome hogs, who present themselves to him for ear scratches. Paul says a San Francisco restaurateur tells him his pork is the best he has ever tasted. Maybe there's something to the theory that we can taste the fear and pain of unhappy animals.

Eating Animals is like almost every other food documentary produced in the past 20 years in that it's critical of the agri-industrial complex. Some people would perceive it as one-sided, though I think it's pretty obvious that most of us would prefer not to know how our sausage is made. And the sausage makers would probably just say that they're responding to demand. Heritage farming is a lot more expensive than the mass production of meat and dairy, and people vote every day with their wallets. Some people simply don't have the wherewithal to afford curated chicken.

Yet anyone who has ever had a relationship with an animal will be given pause by the film, and it might lead more of us to consider the moral cost of our supper.