Almost half of gifts earmarked for scholarships and academics, school says by Jaime Adame | August 3, 2018 at 4:30 a.m.

FILE — Old Main is framed by students and trees Tuesday, March 3, 2012 on the University of Arkansas campus in Fayetteville.

FAYETTEVILLE -- Gifts totaled $292.7 million to the University of Arkansas, Fayetteville for the 12-month period that ended June 30, the university said Thursday.

"That was a huge boost to the year," said Mark Power, UA's vice chancellor for university advancement. He noted that of the total, 49 percent, or $144.5 million, is devoted to student scholarships and academic programs.

The fundraising total includes some gifts not yet received. UA also reported cash receipts for the time period, which added up to $243.5 million.

The $292.7 million total is more than double the $134.2 million in gifts reported by UA for the previous fiscal year.

The university announced it has now raised $947.4 million as part of its ongoing, long-term fundraising effort, Campaign Arkansas, that aims to raise $1.25 billion.

"We were very, very excited and pleased with the continued generosity of our donor base now that we are entering the final two years of Campaign Arkansas," Power said.

The public phase of the fundraising campaign began in September 2016, when a $1 billion goal was announced. The campaign's volunteer leadership committee in April increased the goal to $1.25 billion.

The university in 2002 announced a $300 million gift from the Walton Family Charitable Support Foundation, led by family members of Walmart founder Sam Walton.

The foundation's $120 million arts gift announced last year has been described by UA as the largest ever supporting a U.S. university's art school. The gift includes $50 million devoted to student scholarships, travel grants and internship support.

UA in December announced the $40 million Windgate gift, the largest single grant ever from the Siloam Springs-based foundation. The money will pay for the Windgate Art and Design District, envisioned as a cluster of arts facilities in south Fayetteville, a few blocks from the main UA campus.

Laura MacDonald, president of fundraising consulting firm Benefactor Group, said the percentages of corporate and foundation giving are higher than typical for universities like UA.

"It demonstrates the extraordinary generosity of institutions in northwest Arkansas, and also the nature of the community that is home to some very notable corporations and foundations," MacDonald said. She said she has not worked with UA.

MacDonald said the percentages also show "there may be some room for growth among some individual donors."

Gifts from individuals totalled $36.2 million, making up 12 percent of the total. The university noted that it received 99,943 outright gifts and new pledges from 53,122 benefactors.

"I find that to really be an exceptional number," Power said of the benefactor total.

The university also broke down the gifts by purpose. Apart from the nearly half going to support student scholarships and academics, 32 percent, or $92.7 million, is going to capital projects, and 14 percent, or $39.7 million will support faculty and staff.

Out of the yearly total, $29.3 million, or about 10 percent, is in support of university athletics, Jennifer Holland, the university's director of development communications, said in an email.

She specified that the athletics total was provided by the nonprofit Razorback Foundation. The total is down compared with the previous year, when she said athletics giving totaled about $38.4 million.

The yearly total includes $130.6 million for endowed funds, the university announced. UA in October announced that the value of its endowment had topped $1 billion for the first time. Power said a new endowment total was not yet available, but that it remains valued at above $1 billion.

Changes to federal tax law took effect at the beginning of the year, but Power said there has been continued "strong support" from donors, with little feedback from them about changes in the law.

"We're going to continue to closely monitor the needs of our donors to better gauge its impact," Power said.

As a result of changes in the law, donations made for the right to purchase tickets or seating in collegiate sporting venues are no longer eligible for a charitable tax deduction. Previously, they were eligible for an 80 percent deduction.

Other tax law changes that could affect giving more broadly include an increase in the standard deduction for all filers. The deduction is now $24,000 for married couples and $12,000 for individuals.

"Charitable gifts are still fully tax deductible," MacDonald said. But "fewer households are going to be in a position" to claim such deductions, she added.

In higher education, philanthropy is important given an "anti-tax environment" and public funding that is "not going to provide any more than the most rudimentary basics on a college campus," MacDonald said.

She noted that the rising costs of tuition have saddled students with debt, which in turn affects the economy when they leave college and delay having children or buying homes, for examples.

"Private philanthropy allows many institutions to hold the line on tuition increases and to continue to make higher education accessible," MacDonald said. 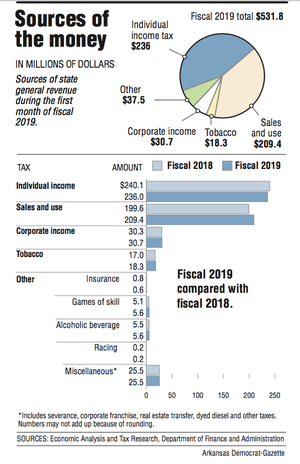 Photo by Arkansas Online
Sources of state general revenue during the first month of fiscal 2019.