According to the U.S. Bureau of Prisons, Files, registration number 14956-010, reported Thursday morning to the Satellite Prison Camp, a minimum-security facility adjacent to the Federal Correctional Institute at El Reno, Okla.

In a minimum-security prison, according to the bureau’s Program Statement, Files is eligible for the two lowest custody levels, described as “community,” the lowest, and “out,” the second-lowest.

Under the designations, Files could be assigned to the lowest- or near-lowest-security housing, including any that is outside the prison’s perimeter; may work on outside details with minimal supervision; and, in some cases, may participate in community-based programs. At the out level, he would be under two-hour intermittent staff supervision.

Files can earn good conduct credit at a rate of 54 days for each year he serves, the Program Statement said.

Files, 46, was sentenced June 18 in federal court in Fort Smith to 18 months in prison on each charge, with the sentences to run concurrently. He also was ordered to pay $89,903.77 in restitution, according to federal court records.

Files, a Republican, waived indictment after an FBI investigation and pleaded guilty to the three charges in January.

He served in the state House of Representatives from 1999 to 2003 and in the Senate from 2011 until his resignation in February.

The wire fraud and money laundering charges grew out of his taking nearly $26,000 in state General Improvement Fund money for his own use.

Files was one of two men, along with Lee Webb, who were working on developing a complex of eight tournament-quality ball fields on 60 acres owned by the city of Fort Smith at Chaffee Crossing. The two had persuaded city directors in 2014 to allow them to develop the ball fields with minimal financial backing and no insurance against the project falling through.

The city committed $1.6 million, but Files and Webb had to come up with the rest of the cost, which was estimated at $4 million to $6 million. They told city officials they would do that through donations of material, equipment and labor.

But by the end of 2016, the project was far from completion, Files and Webb had missed at least three deadlines and work had ground to a halt.

Files also was having personal and business financial problems. He and his FFH Construction LLC had defaulted on millions in business loans, resulting in several court judgments against him. He lost his home in one lawsuit.

In December 2016, he proposed that city officials apply for a General Improvement Fund grant to raise money to extend utilities to the sports complex site. Having control of his share of the funds, he authorized the grant, which was administered through the Western Arkansas Planning and Development District.

A snag developed when he was informed he would have to submit three written bids for the utilities work. He falsified the three bids, with the lowest being from a fictitious company that was actually one of his employees. The bid of $26,945.91 was awarded to that company.

According to court records, after the employee received the money, Files instructed her to open a bank account and deposit the money into that account. He then told the employee to draw out $14,000 cash and draw up a cashier’s check for $11,945.91 payable to FFH Construction and deliver the money to him.

He paid the cash to employees of his construction company, bonuses to the employee, pocketed the remaining cash and deposited the cashier’s check into his bank account, court records showed.

Files was charged with bank fraud after he took out a loan from First Western Bank in November 2016 and pledged a forklift as collateral. However, he had sold that forklift in March 2016 to someone to whom he owed $55,000, according to court records. 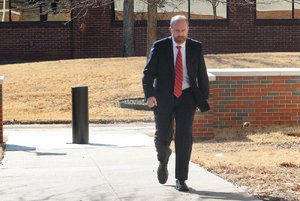