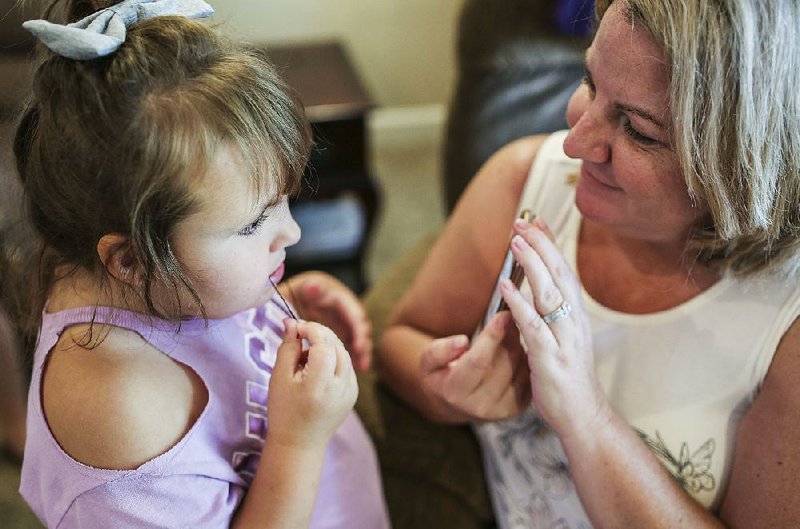 Shelly Leonard shows her daughter, Maebel, a picture of herself as a baby at their home in Judsonia. Shelly is coaching Maebel, who communicates mostly through a sign language unique to her, to say “I love you,” adding, “We work on it, but it hasn’t happened yet.”

JUDSONIA -- Maebel Leonard raps her knuckles on the window, rattling the glass in its frame, grunts and points across the street -- her way of asking to go over to a friend's house to play.

"I know you want to go, sweetie. We'll go in a minute," her mother, Shelly Leonard, replies as she untangles the cords of the window shade from the 7-year-old's fingers.

Maebel's version of playing, Shelly said, usually involves her standing still, watching other kids interact. In one video of a sleepover with her friends, she bounced on a bed with them, holding hands and giggling for a few seconds before moving off to the side.

Maebel can't ride a bike. She can't read. Her parents and a former teacher say she's smart, with a good memory. If her mom mentions offhand that her mouth is dry, Maebel will run off to get her something to drink from the fridge. She notices small changes in the decor at her grandmother's house. But she can only say about 10 words -- mama, dada, goodnight and woo pig sooie, among them.

"There is a lot of things she tries to say, and we don't know what it is," said her father, Eddie Leonard. "We can't."

Maebel communicates mostly through a sign language unique to her. She's learning American Sign Language, which neither of her parents understand, although they have learned her most common signs.

Sometimes, she adds her own twists to the movements. Her sign for "hide and seek," is placing one hand over her right eye. She's almost completely blind in the left.

Maebel has a rare genetic mutation called CHAMP1. To her family's knowledge, she has the only case in Arkansas and one of about 30 that have been studied worldwide.

"She wants to be a normal child; she just can't be," Shelly said.

None of her family members have the condition, and many of the children with the mutation seem fine during infancy.

"She is happy most of the time, regardless of what goes on," Shelly said.

In Maebel's case, the Leonards didn't notice anything different about Maebel until she was about 4 months old. They'd bought her toys with flashing lights, but her eyes wouldn't focus on the gadgets or on the faces of her parents as they played with her.

The CHAMP1 gene is associated with human physical development, of the eyes, the muscles and -- most significantly for Maebel -- the brain. Maebel has low muscle tone, poor eyesight and some difficulty with mobility.

The link between these developmental delays and the CHAMP1 mutation has been known for only about five years, a result of technological advances in genetic screenings.

The Leonards think living to adulthood with a mutated CHAMP1 gene is possible, although development will be severely delayed. Shelly has, in fact, been in contact with a woman in her 40s who was diagnosed not long ago with a CHAMP1 mutation.

When Maebel's parents first took her to the University of Arkansas for Medical Sciences when she was less than 1 year old to try to learn what was wrong with her, doctors were at a loss. At first, the doctors said Maebel was blind. But as she grew older, they found she could see.

Yet, more problems emerged. She couldn't talk and didn't take her first steps until she was almost 3.

Her parents took her to Dr. Bradley Schaefer at UAMS in 2012, when Maebel was 2. Schaefer is a geneticist whose passion for studying the minuscule spirals of proteins and DNA that give people all their inherited traits started in a lab studying the genetics of fruit fly wings.

When seeing patients, his job is to try to uncover what "misspelling" occurred in their genes to cause a problem. The problems can be anything from cystic fibrosis to colon cancer.

In Maebel's case, he had to tell the family that he didn't know what was wrong with her.

When Schaefer first started working in genetic medicine in the 1980s, that was the answer in about 80 percent of cases, he said. But as technology advanced, that statistic flipped. Now, closer to 80 percent of patients go home with a diagnosis.

At one of his yearly visits with Maebel, Schaefer was able to use whole exome sequencing technology (WES) on her DNA after his lab gained access to the machine in 2013.

Maebel got her diagnosis soon after, he said. Schaefer worked on one of the first papers that examined the CHAMP1 mutation, and Maebel was a part of that study.

Whole exome sequencing technology runs through every gene in a person's body, creating a report that lab workers can then analyze to find out what's wrong.

"The interesting part with Maebel is that with this new technology, new conditions are being discovered all the time," he said.

Schaefer and his team have discovered about 25 new diagnoses over the past two years using the technology, he said.

Jill Rosenfeld, who works on whole exome sequencing at the Baylor College of Medicine in Houston, said genetic mutations occur randomly. She worked on a different paper that explored the CHAMP1 mutation.

"It just happens by chance because our cells have to copy the DNA so much," she said.

Because the discovery of CHAMP1 is so fresh, scant research has been done into what it means for the lives of those who have the mutation.

The Leonards gathered most of the information they have from anecdotes of others with the same diagnosis -- one child in Ohio, another in California. There's a private Facebook group where parents share information almost daily, Shelly said.

"It's kind of like you're living in the dark every day," Eddie said. "You don't know."

The Leonards are planning a fact-finding trip to London and Paris next month -- their first time out of the country -- to meet more families whose children have CHAMP1 mutations and hope to find out more of what to expect for Maebel.

"They were so much alike, but they were so different, too," Shelly said, adding that the two didn't seem to get along very well.

They met the boy while visiting Eddie in Ohio. He lives there for 10 to 11 months out of the year, working in the oil fields in West Virginia. When Shelly learned Maebel's diagnosis, he was out working.

"Being out of state, I couldn't be there, and that was kind of tough," Eddie said. "It was just one of them things that was pretty hard to deal with."

Maebel and Shelly make the nearly 13-hour drive every summer to stay with Eddie in West Virginia for a few weeks. During those stays, Maebel is a daddy's girl, Shelly said. On these trips, the family goes to amusement parks often -- Maebel's favorites are the water rides. She loves anything to do with the water, although when she swims, she can't quite coordinate her arms and legs enough to propel herself forward.

In home videos, Eddie pushes Maebel toward her mom, and the little girl flaps around underwater, eyes open and water pouring into her mouth through her wide smile, despite the sting of chlorine.

Another feature of CHAMP1 is that Maebel feels pain less strongly than most children. When she was a baby, getting shots didn't faze her. Earlier this summer a bee stung her, but she didn't cry.

"At first it was kind of scary," Shelly said. "We were like, 'What if she really got hurt, and we didn't even know it?'"

Shelly doesn't work anymore. She went to college to be a funeral director and embalmer, but stopped working soon after Maebel was born to take care of her full time. She says the extra time with Maebel has helped her form a closer relationship with her daughter.

"I guess it's a good one because most of the time, it's just me and her," Shelly said. "So she's pretty much attached to me."

But every Friday, Maebel stays with her godmother, Christy Pantel. The two met when Maebel was in kindergarten and Pantel was a teacher's aide for the class.

"She's just a firecracker, bless her heart," Pantel said. "She came in and just stole our hearts. She's just into everything, and there's not a dull moment."

They quickly formed a special relationship. Pantel would take in extra snacks for Maebel, things like cheese sticks and graham crackers, she said.

At school, they learned that Maebel most liked hands-on learning with items of different textures. She learned math by counting groups of plastic dinosaurs, Pantel said.

"I wanted to hear her say my name so bad," she said. "Every day I would work with her to get her to say my name, and finally at the end of the year, she finally said it."

Shelly wants to do something similar and coaches Maebel to say "I love you."

"We work on it, but it hasn't happened yet," Shelly said.

In the meantime, Shelly and Eddie hope that they can have a "normal kid" experience with their daughter. They want her to open presents on Christmas or show interest in finding Easter eggs.

Maebel's eighth birthday was a little over a week ago, but she doesn't seem to have much awareness of what day it is or why it's important, Shelly said.

"I guess that's the main stuff that bothers me, is the normal kid stuff that you get to look forward to. We just don't get to do that. We've tried it all, and it just, it don't faze her," Shelly said.

She picked up her phone and scrolled through old pictures of Maebel, who dominates her photo gallery. One showed the girl blowing out candles at last year's party.

Maebel tugs on her mother's arm -- she needs the phone close to see the pictures. When she catches sight of the birthday cake, she takes a deep breath, puffs up her cheeks with air and blows on the screen.

One, two, three gusts of air and she's satisfied that the candles are out. She looks up at her mother, giving her a toothy grin until Shelly kisses her forehead.

Then Maebel hurries off, distracted by a coupon she's found on the floor. 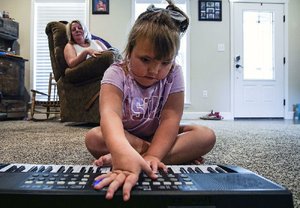 Photo by Mitchell PE Masilun
Maebel Leonard, 8, plays on a keyboard recently (top photo) under the eye of her mother, Shelly, at their home in Judsonia. 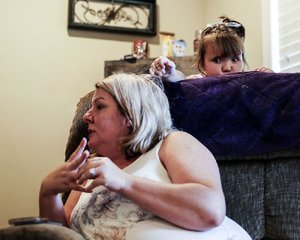 Photo by Mitchell PE Masilun
Later Maebel plays with her mother’s hair as Shelly talks about living with Maebel’s genetic mutation, called CHAMP1. “She wants to be a normal child; she just can’t be,” Shelly said. Her case is the only one in Arkansas, the Leonards say, and one of about 30 that have been studied worldwide. 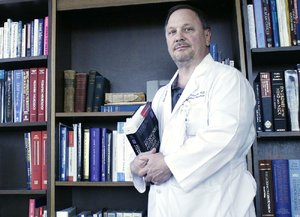 Photo by Emily Walkenhorst
Dr. Bradley Schaefer. He works at both Arkansas Children's Hospital and UAMS.