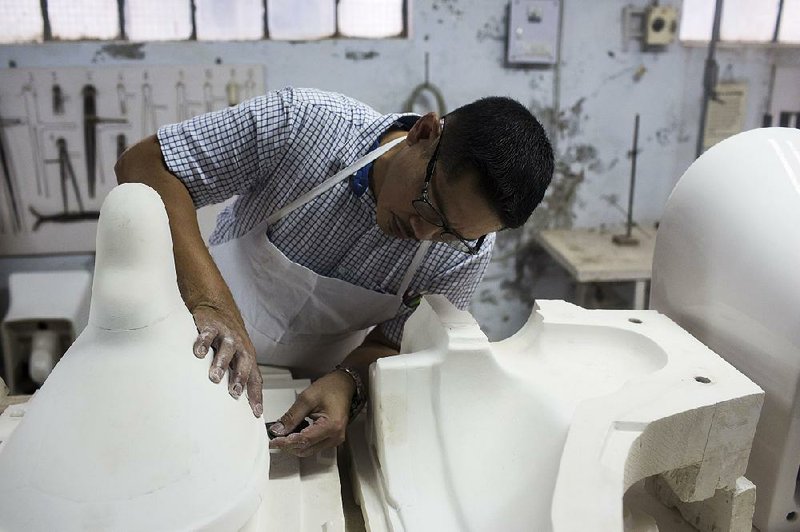 An employee works on a mold at the HSIL Ltd. factory in Haryana, India. India’s toilet-building mission has been a boon for some manufacturers.

India is on the greatest toilet-building endeavor in human history, and it's a windfall for some companies.

Almost 80 million household toilets are estimated to have been built since Modi's 2014 pledge to ensure universal sanitation coverage by October 2019, which will mark 150 years since the birth of independence leader Mahatma Gandhi. The scale-up of latrines and a nationwide campaign to encourage their use is driving a market for toilet-related products and services that's predicted to double to $62 billion by 2021.

"It's the biggest, most successful behavior-change campaign in the world," said Val Curtis, director of the London School of Hygiene and Tropical Medicine's Environmental Health Group, who has worked on the program in India. "Every time I go there, I feel like I can't sit down for weeks after because I'm excited about what they're doing. It's incredible."

"We are one of the most trusted brands in India, and we've always managed to outperform the market with Dettol," Rakesh Kapoor, Reckitt Benckiser's India-born chief executive officer, said on a conference call in April. The company has been able to increase awareness of its cleaning products by working to promote sanitation and hygiene.

That's a common theme across suppliers of home-care products, according to Sowmya Adiraju, a research analyst at Euromonitor in Bengaluru. For example, Hindustan Unilever Ltd. entered the low-cost toilet cleaner market with a new powdered product, and has been trying to make toilets accessible and affordable through its Domex Toilet Academy.

Companies are investing heavily on spreading awareness about better hygiene products, aiding the penetration of home care products in India, which is still low by global standards, Adiraju said in an email.

The "Clean India" mission has had a "largely positive" impact on suppliers. Sales of commodes and related products are predicted to expand about 11 percent annually through 2022, according to Adiraju. The sanitation campaign was anticipated initially to provide a bigger sales boost, but some companies have partnered with governments more as a social initiative than a business opportunity, she said.

Before Modi began the Clean India program the country accounted for more than half of the world's 1.1 billion people who routinely relieve themselves in fields, beaches and other open spaces.

The practice contaminates food and drinking water, and spreads diseases that cause chronic malnutrition and childhood stunting -- a burden the World Bank estimated costs India 6.4 percent of its gross domestic product.

"Sanitation is a basic need that is denied to a majority of the Indian population," said Rajeev Kher, chief executive officer of SaraPlast, a closely held manufacturer, supplier and cleaner of restrooms, including portable toilets for rent. Kher has also converted aged buses into mobile toilets to provide a "clean and safe toilet experience" for women in a collaboration with municipal authorities in the western city of Pune.

Increased government spending on toilets and sanitation bodes well for Indian Hume Pipe, according to Pallav Agarwal, an analyst with Antique Stock Broking in Mumbai, formerly Bombay, who rates the pipe company a buy. It secured a dozen major work orders for water supply and sewage projects across six states in the 2018 fiscal year, totaling $300 million, Agarwal said in a July 5 report.

Shares of Cera Sanitaryware and Somany Ceramics have more than doubled since August 2014, when Modi in his Independence Day speech emphasized on hygiene and the need to build toilets in rural areas. Kajaria Ceramics and HSIL have each jumped at least 40 percent in the period.

Mumbai-based Tata Group's steel division makes Nest-In, a modular toilet that comes with an option for a bio-digester. The company has been focusing on products for end-users, including modular housing and toilets, and in March opened public toilet blocks at rest stops along a national highway.

"Private sector enterprises have to pitch in to make [Clean India] successful," said Prabhat Pani, head of partnerships and technology at Tata Trusts, which owns two-thirds of Tata Sons, the apex company of Tata Group.

Information for this article was contributed by Jason Clenfield of Bloomberg News.