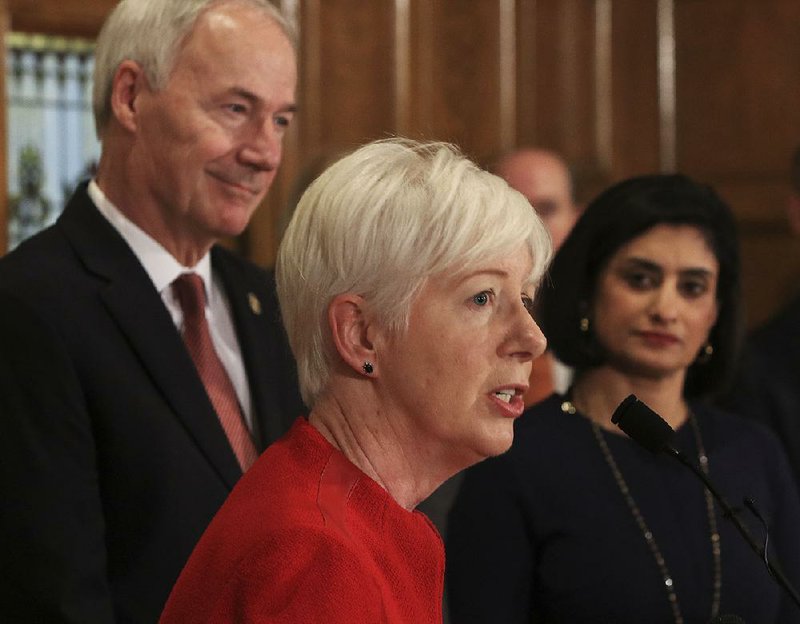 Arkansas' Medicaid spending fell by $22 million in the fiscal year that ended June 30, the first annual drop in spending for the program state officials could remember.

The overall decrease came despite slightly higher spending on Arkansas Works, as the expanded part of the state's Medicaid program is known.

Arkansas Works spending rose by less than 1 percent to $1.91 billion. That was more than offset by a $31 million decrease in spending on the traditional Medicaid program, which covers primarily children from low-income families and poor people who are elderly or disabled.

Combined, spending on both parts of the Medicaid program fell by 0.3 percent, to $7.1 billion, according to the state Department of Human Services.

"That is the first time we're aware of that's ever happened in Arkansas history," Gov. Asa Hutchinson said.

He credited lower enrollment as well as the state's efforts to slow the growth of spending on the program.

"This is not a change in services," he said.

From July 31, 2016, to June 30, 2018, enrollment in both Arkansas Works and traditional Medicaid fell from just over 1 million to about 959,000, according to Human Services Department records.

Under the 2010 Patient Protection and Affordable Care Act, the federal government paid the full cost of Medicaid expansion from 2014-16.

Last year, Arkansas became responsible for 5 percent of the cost. The state's share will increase to 7 percent next year and then to 10 percent for 2020 and beyond.

The expansion extended Medicaid eligibility to adults with incomes of up to 138 percent of the poverty level. This year, for instance, the cutoff is $16,753 for an individual or $34,638 for a family of four.

Marci Manley, a spokesman for the Human Services Department, said she didn't have information on Arkansas' share of the costs for traditional Medicaid and Arkansas Works for fiscal 2018.

Under the so-called private option, most Arkansas Works enrollees are covered by private plans offered on the state's health insurance exchange, with the Medicaid program paying the premium.

After surpassing 340,000 in 2017, enrollment in Arkansas Works began falling last year, in part because of efforts by the state to verify enrollees' eligibility. By June 30, about 287,000 people were enrolled.

Despite the drop in enrollment, spending on the program rose because of annual increases in the premiums charged by insurance companies for private option plans.

In January, when the increases took effect, the state's payments to the companies increased more than 14 percent, to $578.27 per enrollee.

Spending on that part of the program over the same period fell by less than 1 percent, from $5.226 billion to $5.195 billion. The drop included a 2.9 percent reduction, to just over $1 billion, in payments for inpatient and outpatient hospital care, and a 7.4 percent decrease, to $417 million, on spending on prescription drugs.

For instance, Paula Stone, deputy director of the Human Services Department's Division of Medical Services, credited a limit on reimbursement for group psychotherapy that took effect in October 2016 as well as an overhaul of how the state pays for mental health benefits that started on July 1, 2017, for reducing spending on mental health services.

Spending for those services fell by 6 percent, to $387 million.

Similarly, Melissa Stone, director of the department's Division of Developmental Disabilities Services (who is not related to Paula Stone), cited caps on reimbursement for speech, occupational and physical therapy for the developmentally disabled, which took effect July 1, 2017.

According to the department, spending on those services fell by 3.6 percent, to $164 million.

Hutchinson in 2015 set a goal of slowing the growth of spending on the traditional Medicaid program by enough to save $835 million from fiscal 2017-2021.

In a letter to Hutchinson last week, Human Services Department Director Cindy Gillespie said the state saved $288 million in 2017 and 2018 through changes to the program and an additional $341 million over that period through lower enrollment.

Those figures were based on a comparison of actual spending to what spending would have been if it had grown 5 percent each year from fiscal 2016 to 2018.

The legislative task force had projected savings of $230 million in fiscal 2017 and 2018 through changes that it recommended, Gillespie noted.

"While financial challenges remain, through your leadership, and with the ongoing support of the General Assembly, Medicaid is becoming more financially sustainable while ensuring services for those most in need remain intact," Gillespie said in the letter.