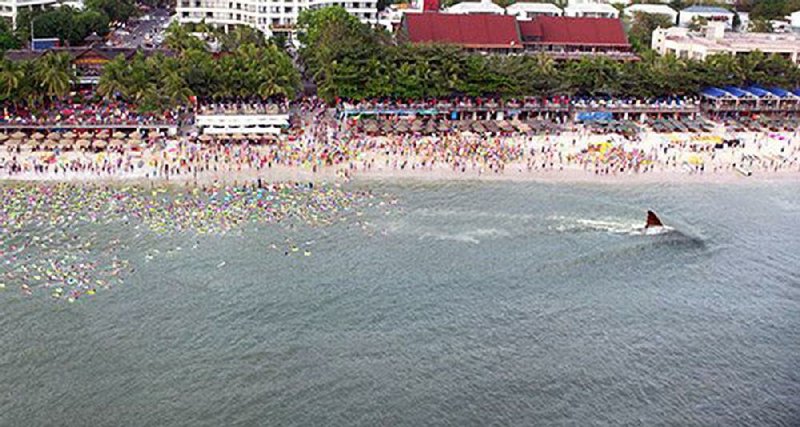 A 70-foot shark terrorizes a beach full of people too stupid to stay out of the water in Jon Turteltaub’s The Meg.

Back in the 1990s, I used to date a woman named Meg, and I couldn't wait to show her my new computer. I boasted, "This thing has eight Meg."

"I thought you only had one," she quipped.

Rating: PG-13, for action/peril, bloody images and some language

"I've got eight megabytes, but only one megababe," I replied with all the wit I could muster.

While this exchange indicates why we didn't form a lasting union, it's still more entertaining than anything that happens in the new giant shark movie The Meg.

The title character is a prehistoric undersea monster called a "megalodon" that's longer than a couple of tractor trailers and eats just about anything stupid enough to swim near it.

Fortunately, for the sake of preserving the megalodon species, there's a surplus of people who are eager to become fish food in this movie. These folks are supposed to be marine scientists, but they act like chickens running to embrace Colonel Sanders.

Thanks to the largesse of a billionaire (Rainn Wilson), who seems to have made his fortune off of being a plot point, the scientists at a marine outpost have discovered that there is a whole world of species living below the Marianas Trench. Before either the characters or the viewers can ooh and aahh at any of the critters that appear to have escaped from a PlayStation screen, the crew of the sub finds itself at the mercy of that humongous shark.

The only hope for the scientists is a bitter rescue diver named Jonas Taylor (Jason Statham), who'd rather be drinking beer in Thailand than extracting the crew of an errant sub. Of course, his ex-wife is on board with only hours of oxygen left.

How he'll get from Thailand to the Trench (a distance of only 2,741 miles) in time to save the endangered crew is never really explained. Perhaps director Jon Turteltaub (National Treasure, While You Were Sleeping) and three screenwriters adapting Steve Alten's book figured that if a prehistoric shark could survive millions of years in the bottom of the ocean, Jonas could probably teleport himself.

In the world of The Meg, nothing is too big.

As a result, the stakes become so absurd that there is no sense of real danger. Turteltaub has directed some enjoyable comedies, but the biggest laughs in The Meg come from the fact that nothing onscreen is credible.

In Jaws, it was scary that a hundred swimmers, or even one, could become dinner for a shark. When the latest gargantuan shark approaches a beach with a population that would dwarf that of Shanghai, it's hard not to giggle because even a hungry megalodon would get indigestion on that human buffet.

Speaking of the older, better shark movie, part of the reason that it has aged so well is that Steven Spielberg had to imply a larger than normal shark was dining on the swimmers off Amity Island.

Producer Richard Zanuck lamented that every usable shot of Bruce, the perennially malfunctioning mechanical shark, was in the movie. Spielberg and screenwriter Carl Gottlieb correctly figured that if viewers cared about the people hunting and swimming away from the shark, the audience wouldn't care if they didn't get to see much in the way of a hungry fish.

Unfortunately, with The Meg, an able cast has little more to do than utter lame wisecracks and look concerned. Chinese star Bingbing Li manages to squeeze in a lot of emotions despite being surrounded by a dense collection of CGIs. She's auditioning for better English language roles.

Jaws novelist Peter Benchley devoted the final years of his life trying to preserve sharks because the film and the book made viewers forget that sharks are essential for keeping the oceans healthy. He might have reconsidered this mission if he'd lived to see The Meg.