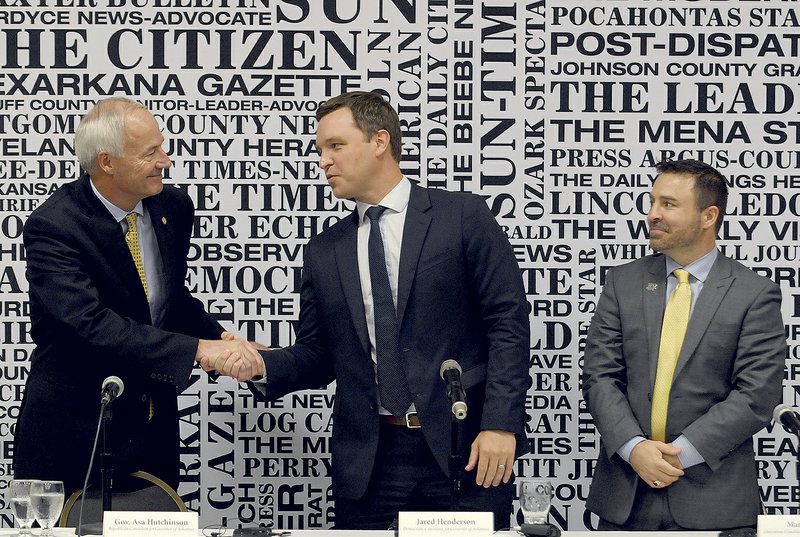 The two candidates agreed more often than they disagreed during a forum for three gubernatorial candidates sponsored by The Arkansas Out of School Network and various faith-based groups, and attended by more than 200 people at New Hope Baptist Church in North Little Rock.

Libertarian candidate Mark West, who opposes Arkansas' version of Medicaid expansion for low-income adults, said the state should make it a priority to provide health care to children by increasing competition through the free market and reducing the cost of health care to expand access, and that he opposes using public funds for quality after-school and summer school programs.

"Our biggest threat to that often comes from the federal government," he said, adding federal funding for the program through the Childrens' Health Insurance Program was in jeopardy in Congress last year.

He said that children should have access to health insurance without any barriers and he supports the ARKids First program and wants to make sure it remains a strong program.

Hutchinson said first lady Susan Hutchinson has been a strong advocate for child advocacy centers for children and "we need to protect Arkansas kids."

He said he intends to focus on the free market and "try to fight what is driving the cost increases in health care, so we can begin opening that access to more people and make it more affordable for everyone."

Henderson said that "we are living in the richest country in the history of the world, and I think given that we should see and treat health care as a right."

Henderson said Arkansans need to elect people who will work on reducing what he called the outrageous costs of prescription drugs and other health care costs.

Hutchinson said a three-fourths vote is required in the 100-member House of Representatives and 35-member Senate to reauthorize the use of state and federal funds for the Arkansas Works version of Medicaid expansion, and he issued a line-item veto of a provision barring the use of these funds for the program in 2016.

"That was a political risk [and] that was a hard-fought battle and, yes, I think we have reached the point that we are beyond that," he said.

"I think it is going to be easier in the future [to reauthorize funding for the program] because we have reformed it, we have strengthened it and we have proven its worth, as well," Hutchinson said.

Both Henderson and Hutchinson said they support using public funds for quality after-school and summer school programs because the programs will help keep children out of trouble and empower them.

But West said he doesn't believe that public funds should be used for such programs.

"I know this is going to be an unpopular answer but .. I think what we need to do is stop sending the money to the state and to the local government, keep it in our communities, so we can put more money into after-school programs," West said.

Henderson said the state needs to do more to help small business owners who need $5,000 to $10,000 in seed capital, lack health insurance and need to 15 to 20 hours of basic training to be successful.

"In the next legislative session there is going to be a big debate around the next round of tax cuts," he said, with the Legislature's tax overhaul task force considering a tax-cut plan that reduces state revenue by $280 million a year.

"So is that the best investment of our money or can some of those funds go to provide some seed capital for entrepreneurs across the state?"

Hutchinson has proposed reducing the state's top individual income tax rate from 6.9 percent to 6 percent, which he projects will reduce state tax revenue by about $180 million. He said he wants to finance the tax cut through economic growth and efficiencies in state government.

Hutchinson said that 70,000 jobs have been created since he became governor in 2015 and the average wage of the jobs created through incentive agreements is $20 an hour.

"We are putting $2 million into small innovative companies that are startup, that might be in the technology area and so we are doing that microinvestment portfolio that can help our technology companies [and] can bring some of those small businesses to the state," he said.