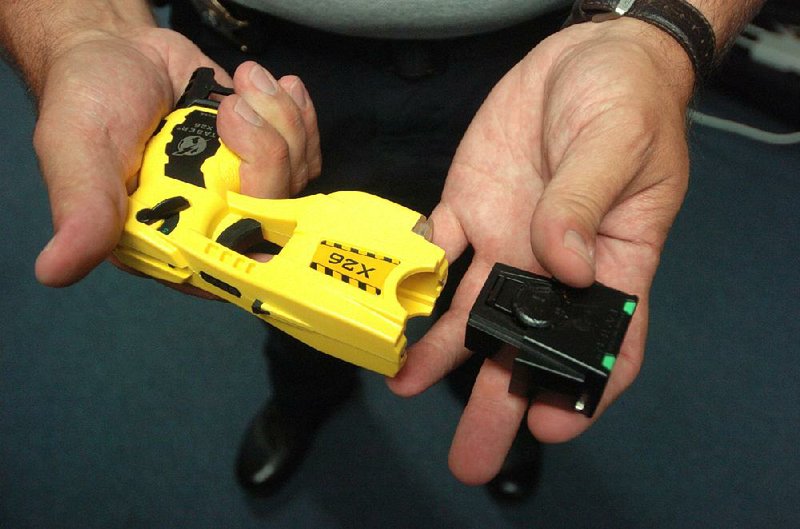 The Little Rock Board of Directors approved the purchase of 31 new Tasers for the Little Rock Police Department during its Tuesday meeting.

Some law enforcement agencies in Arkansas have switched from Tasers to pepper guns.

Cleburne County Sheriff Chris Brown said a shot from a pepper gun can incapacitate a person for 45 minutes versus five seconds for a Taser, which is a brand of "conducted electrical weapon" made by Axon.

Occasionally, someone who has been shot with a Taser will pull the barbs out and want to fight, he added.

When Brown became sheriff in January 2017, his department had 30 Tasers, but most of them were nine years old. He said Tasers expire after five years.

Brown has replaced most of those Tasers with 30 JPX Pepper Guns.

"I don't have anything against Tasers at all," he said. "We have a couple that we still use in really limited circumstances ... but that's not what our people carry anymore."

Brown said the pepper guns his deputies carry are shaped like firearms and have two barrels on top.

"I love them," he said. "I think they're fantastic. ... It shoots a pool of liquid, a really tiny amount of liquid."

JPX Pepper Guns, which are used by several other Arkansas law enforcement agencies, shoot .28 fluid ounces of pepper gel up to 23 feet. That liquid has the density of barbecue sauce, said Robert Knight, a Texas police officer and JPX dealer.

"It's pushed by a small-caliber pistol primer," Knight said. "It literally squirts the stuff out at a muzzle velocity of 590 feet per second."

The impact feels like a slap, according to Knight. Then, about three seconds later, the heat kicks in -- up to 4 million Scoville heat units of oleoresin capsicum derived from a cayenne pepper plant that JPX imports from India.

Four million Scoville heat units is about 500 times hotter than a jalapeno pepper.

Knight said the two-barrel JPX model sells for $340 with ammunition and a laser site, and the full-size four-barrel pepper gun sells for $470. He said a basic Taser starts at about $1,200.

Steve Tuttle, a spokesman for Axon, said Tasers replaced pepper spray and batons 20 years ago as a more humane way to incapacitate someone.

"It certainly is less expensive by far and away, but you sort of get what you pay for," he said of pepper guns.

Tuttle said incapacitating someone for 15 seconds with a Taser allows a police officer enough time to handcuff them and then the effects quickly subside.

When someone is pepper sprayed, they're writhing in pain for 45 minutes, he said. Then the officer needs to "babysit" the suspect and possibly take him to the hospital, getting pepper spray in his car in the process, Tuttle said.

"It just doesn't make sense to me," he said.

Tuttle said Tasers have a range of 25 feet, but are often used in closer contact with a suspect.

He said pepper spray is "pain compliance," not incapacitation. It hurts to open the eyes after being pepper sprayed, but a suspect could still swing his arms and fight, Tuttle said.

"It certainly sounds like they've improved the delivery method," he said of pepper guns. "I've seen the weapon, but you're still delivering pain compliance vs. incapacitation."

Tuttle also pointed out that a Taser has a track record.

"Every time you pull the trigger on that Taser weapon, it records the time, the date and the duration of each use, and it even records every single electrical pulse to see if a good connection has been made to the human body," Tuttle said.

Tuttle said he didn't know how many heart attacks had occurred after a Taser was used in the field, but that the cardiac arrest could often be attributed to something else, such as health issues.

Tuttle said Axon has been sued 224 times over the 25-year history of the company, and it has lost only two of those lawsuits.

According to a seven-page list of "law enforcement warnings" on its website, www.axon.com/legal, Axon states that: "Some individuals may be particularly susceptible to the effects of [conducted electrical weapon] use. These susceptible individuals include the elderly, those with heart conditions, asthma or other pulmonary conditions, and people suffering from excited delirium, profound agitation, severe exhaustion, drug intoxication or chronic drug abuse, and/or over-exertion from physical struggle. In a physiologically or metabolically compromised person, any physiologic or metabolic change may cause or contribute to sudden death."

Brown said that list covers many of the people his deputies may encounter in a law enforcement capacity.

Tuttle said the warning doesn't say you can't use Tasers on people under those circumstances.

"Those people are at risk anyway," he said. "They are just as at risk with pepper spray."

Brown said using a Taser near a body of water can be problematic because anyone shot with a Taser could fall into the water and drown. It's a concern for Brown because Greers Ferry Lake is in Cleburne County.

"We've used them on three people since we've had them, and the word has spread pretty quick," Stephens said. "They don't want any more of it. ... We've had good results."

Stephens said the pepper guns aren't electronic devices. They can operate without batteries, but batteries are used to illuminate an optional red laser sight on the guns.

In Northwest Arkansas, pepper guns are being used in the Benton and Washington county jails but not by deputies on patrol. In both counties, Tasers are still used in the jails.

Lt. Michael Ford Jr., a spokesman for the Little Rock Police Department, said they haven't purchased any pepper guns. The department uses Tasers in addition to regular firearms, he said.

Cody Burk, a spokesman for the Pulaski County sheriff's office, said they are still using Tasers instead of pepper guns.

"We looked at that, but it does pretty much the same thing as the pepper spray we carry in a can," he said. "We've got that on our belts."

"It is a thick goo, not spray droplets," he said. "If you fire a spray with a fan going beside it, the fan will turn the spray away from the target."

"The product is aimed and deployed just like a firearm," he said. "No shaking a canister and then spraying it in the general area until you hit the target."

Knight said he has sold pepper guns to several other Arkansas police departments and sheriff's offices. He didn't know if they were making a complete switch from Tasers or are using them in conjunction with pepper guns.

Scott Bradley, executive director of the Arkansas Sheriffs' Association, said a few counties have been moving away from Tasers because of legal concerns.

Both Tasers and pepper guns are tools an officer can use initially to avoid personal contact with someone who is resisting arrest, Bradley said.

"The problem with pepper spray is you still have to put hands on those people at some point, and it does get on you," he said.

Bradley said Tasers shoot barbs that must "get into your skin."

"If you don't get a good bite, it's not effective," he said.

Bradley said some pepper guns shoot a small ball that explodes on impact.

"Most of the pepper ball guns contain a powder, which has shown to not be as effective as a high-density liquid that sticks to the subject," Knight said. "And many departments shy away from the ball because it is firing a solid object at the subject."

Bradley said he'd rather be Tased than pepper sprayed. He said the effects of pepper spray can linger for days.

"You can recover from a Taser a lot quicker than with pepper spray," he said.

"The goal is to take someone in without causing severe physical injury," he said. "If you can keep from taking someone's life, it's definitely worth it."

Print Headline: Some lawmen in Arkansas opt to use pepper guns instead of Tasers