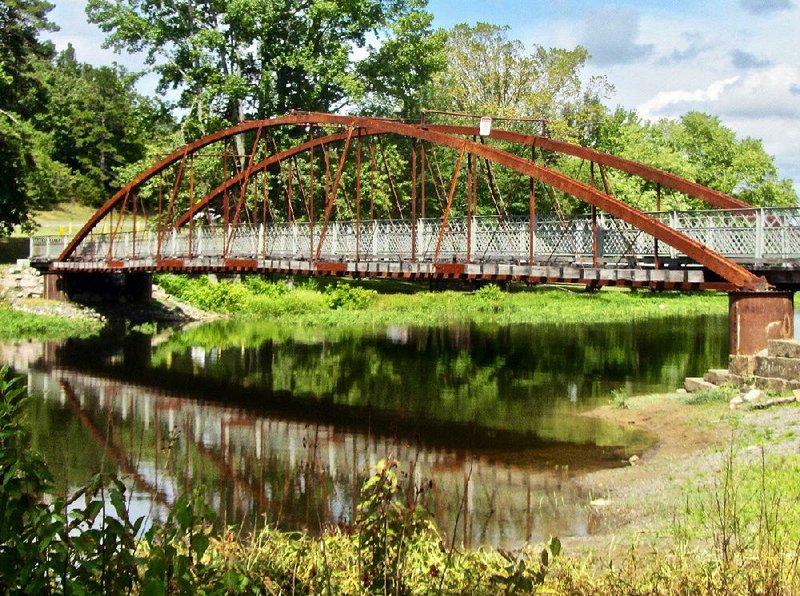 The 144-year-old Springfield-Des Arc Bridge has been moved to the city of Conway’s Lake Beaverfork Park.

CONWAY -- The bridge said to be Arkansas' oldest surviving span has found a fresh home on the northern edge of Conway. That's a happy contrast to the much publicized fate of the old U.S. 79 White River bridge at Clarendon, which appears doomed to demolition.

The 144-year-old Springfield-Des Arc Bridge was taken apart and moved about 10 miles south from its original spot spanning North Cadron Creek. In September, a ceremony rededicated the wrought-iron structure at its tranquil new setting on a cove in Lake Beaverfork Park, Conway's largest city park.

Two plaques at the entrance to the 146-foot-long bridge, open to pedestrians near the lake's fishing pier and swimming area, describe its history including the relocation project.

The bridge was built at a time when river transportation still played a major role in Arkansas commerce, even as ever more railroad lines were being laid down. In the 1870s, Springfield was the seat of Conway County, connected by a busy road to Des Arc, then a bustling steamboat port on the White River.

Traffic on the route was slowed by the need to take a ferry across North Cadron Creek. So in 1871, county officials awarded a contract to King Bridge Co., which built the structure in Iola, Kan., for assembly in Arkansas. It was erected in 1874. As well as being The Natural State's oldest bridge, it is a rare surviving U.S. example of "bowstring arch truss" design.

Springfield-Des Arc Bridge "survived several near catastrophes over the years, and was even condemned as a danger," reports the site atlasobscura.com, a "friendly tour guide to the world's most wondrous places."

Major floods in 1882, 1927 and 1982 rose above its wooden deck. Also, according to Atlas Obscura, the bridge "has burned, had a heavy log truck fall through the floor on one occasion, and a bulldozer on another."

Although the span gained a spot on the National Register of Historic Places in 1988, it was superseded three years later by a modern concrete structure just to the north. In 2015, it landed on a list of the eight most endangered properties in the state.

About then, efforts led by the city of Conway and the Faulkner County Historical Society got going to move and preserve the bridge. The project, completed by a nonprofit Iowa firm called Workin' Bridges, was funded with $508,000 from the city's advertising and promotion budget.

"Moving a 146-foot iron bridge is no small task," notes one of the plaques at the site. "Under the direction of Workin' Bridges, two cranes lifted the bridge, then lowered it to the nearby ground. There iron workers took it apart so it could be transported to North Little Rock for cleaning and refinishing.

"The pieces were then trucked to Lake Beaverfork Park, where technicians reassembled them. New caissons were built, stones from the original abutments were incorporated into the approaches, and a railing was added. Finally a crane lifted the bridge to its new home, here, over Lake Beaverfork."

In a Utopian world, a wishful thinker could imagine moving the beleaguered White River bridge at Clarendon. But in reality, that 87-year-old structure has a main span of nearly 398 feet and a total distance of 4,282 feet from one approach end to the other. Even if it could be disassembled, where would there be room to put it?

To reach Springfield-Des Arc Bridge from the Little Rock area, take Interstate 40's exit 125 in Conway. Proceed left briefly on U.S. 65 before turning right on U.S. 64, then turning right again soon after on Arkansas 25 to Lake Beaverfork Park. The bridge is visible from the highway. More information can be found at the Springfield-Des Arc Bridge posting on encyclopediaofarkansas.net.