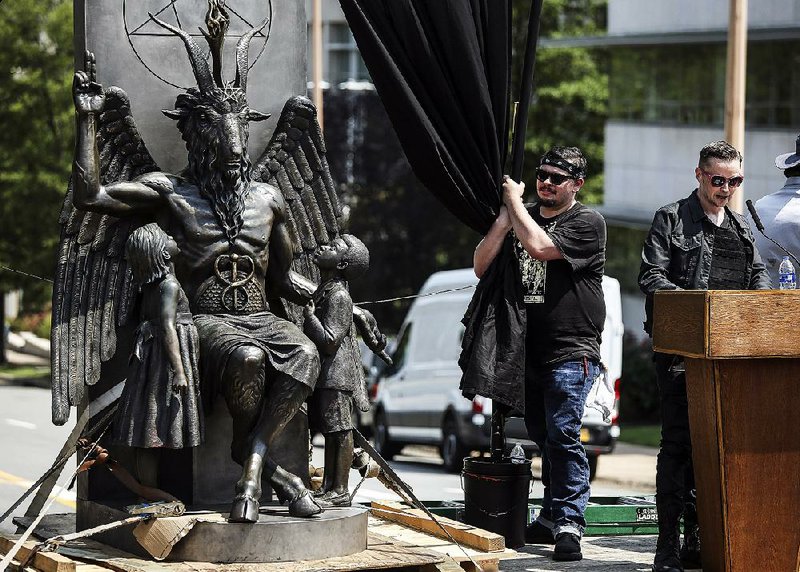 FILE — Lucien Greaves, a spokesman for the Satanic Temple, speaks near a statue of Baphomet at the state Capitol in Little Rock in this Aug. 16, 2018 file photo. (Arkansas Democrat-Gazette file photo)

Scores of people attended a rally held by the Satanic Temple on Thursday in Little Rock that featured the group's 7½-foot-tall Baphomet statue.

The event was planned by the Satanic Temple and Satanic Arkansas -- which is not affiliated with the national organization -- and took about two months to put together, organizer Ivy Forrester said. Forrester, like several at the rally, gave a pseudonym instead of her real name.

The event was scheduled for 1-3 p.m., but supporters and protesters showed up shortly before the start time and many left before 3 p.m. About 150 people attended the rally, which had a substantial police presence. Authorities declined to give an official crowd estimate.

The rally was prompted by the reinstallation of a Ten Commandments monument at the Capitol in April, the group said.

Installation of a statue of Baphomet -- a part-man, part-goat deity who is seated and accompanied by two smiling children -- alongside the Ten Commandments monument has been denied under a 2017 law that requires legislative sponsorship for consideration of any monument.

The group has argued that the Ten Commandments' place near the Capitol requires other religions be given the chance to display their symbols.

The Ten Commandments monument was sponsored by Republican Sen. Jason Rapert and installed quietly in 2017. Less than 24 hours after its installation, Michael Tate Reed II drove his car into the monument, smashing it to pieces. Reed of Van Buren was charged with felony criminal mischief but was acquitted on mental-health grounds.

The Satanic Temple had originally tried to install its Baphomet statue there, but Oklahoma's Supreme Court ruled the Ten Commandments monument was unconstitutional, and it was taken down. The Satanic Temple then suspended its Oklahoma campaign.

Rapert said in an online statement Thursday that he respected the protesters' First Amendment rights but also called them "extremists" and said "it will be a very cold day in hell before an offensive statue will be forced upon us to be permanently erected on the grounds of the Arkansas State Capitol."

Many rally attendees dressed in black, with some wearing horns or armor. Shouts of "Hail Satan" and the sound of bagpipes resounded during speeches.

Jones' speech was interrupted by a masked protester who called him a "liar" and an "agent of Satan." The man took off his mask while speaking and walked away with police officers alongside him.

Throughout the event, members of the Knights Party, a white-nationalist group, held Christian and Confederate flags behind the crowd, while across the street a group of Christians held signs showing Bible verses. One woman stood next to a cross bearing the word "repent." A man stood alone, preaching, throughout most of the proceedings.

The Satanic Temple describes itself as a "non-theistic religious organization dedicated to Satanic practice and the promotion of Satanic rights."

Information for this article was contributed by The Associated Press and by Jillian Kremer of the Arkansas Democrat-Gazette.