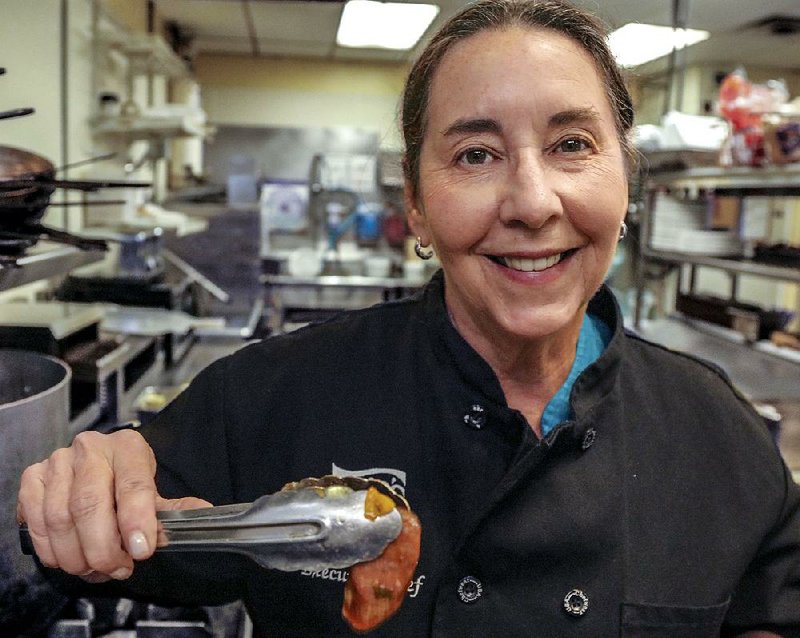 Capi Peck, executive chef and owner of Trio’s restaurant, knows her way around a kitchen. She is us- ing her professional skills to teach low-income families how to serve healthful meals and save money. ( John Sykes Jr.)

No, this isn't the Food section, these are just some of the tasty, healthy and inexpensive dishes made in Cooking Matters, a culinary and nutrition education program from the Arkansas Hunger Relief Alliance that teaches low income families and individuals how to assemble and make healthful meals and save money on food.

"Of all the volunteer work I've done, this is my favorite thing," says Capi Peck, executive chef and owner of Little Rock restaurant Trio's, who has taught many Cooking Matters courses.

The free classes, which meet once a week for six weeks, are available statewide and cover everything from shopping and food prep to cooking and -- maybe the best part -- eating.

"We go to the grocery store and people learn how to shop, how to read food labels," Peck says. "You can see that if sugar is in the top two or three ingredients, then that's probably not a healthy option."

Kitchen skills like how to use a knife, how to keep work spaces sanitary and how to properly thaw meat are some of the things participants learn, says Peck, who represents Ward 4 on Little Rock's Board of Directors.

And then there is the food.

"One of our most popular recipes is Asian Chicken and Noodles," Peck says. "It's super easy and healthy. The base is peanut butter and we use natural peanut butter with no additives or sugar. We show them how easy it is to add some soy sauce and ginger, steam the broccoli and use whole wheat noodles to make a really colorful, easy dish in 30 minutes that tastes like you got it at a good Chinese restaurant."

There are sessions on quick, healthful breakfasts such as smoothies and snacks like baked sweet potato fries and fresh fruit pops frozen in ice trays.

"We also focus on whole grains, switching to whole grain bread and pasta and finding other ways to sweeten things without sugar," Peck says.

Participants also get to enjoy the results of their labor.

"People rarely sit down and have a family meal together," Peck says. "They don't have that intimacy that happens when you create a meal together and sit down and share it. That's a very important part of Cooking Matters. We learn about it, we prepare it, we talk about it and then we sit down and eat together. At the end of the class, we share the meal."

Cooking Matters is a national program offered by the Washington-based nonprofit Share our Strength and is sponsored by Walmart. It's also part of the No Kid Hungry campaign, which approached then-Gov. Mike Beebe in 2010 about bringing the program to Arkansas, where it is now part of the Hunger Relief Alliance.

The alliance partners with groups from all over the state that serve low income, at-risk people to offer Cooking Matters classes in their communities, says Cooking Matters Director Alex Handfinger. Classes are held in places such as churches, schools and community centers.

"Arkansas is struggling with food insecurity," Handfinger says. "We consistently have some of the highest rates in the nation, with about one out of every five adults and one out of every four kids and senior citizens [affected]."

About one out of every three adults and children in Arkansas also struggle with obesity, he says.

"In a lot of the state, people live in what we call food deserts," Handfinger says. "In some rural areas, people might be driving 30-40 miles to get to the closest grocery store, so they may be doing a lot of their shopping at a convenience store" where there are few healthy food options.

Even in cities, low-income areas might not have easy access to healthful groceries, he says, and people often turn to fast food options.

"The best way to both save money on your food budget and eat healthier is to cook meals yourself at home," Handfinger says.

Cooking Matters partners are trained by Handfinger in how to implement the curriculum during a three-hour course.

Teachers, by the way, don't have to be chefs like Peck.

"We work with all sorts of folks," Handfinger says. "We love working with chefs, but in some of these communities there aren't necessarily a lot of chefs around, and we want to be able to offer this program anywhere, so we will work with and train anyone who is comfortable in the kitchen and talking about nutrition."

It didn't take much to get Peck involved. She is a founder of and longtime volunteer for the annual Serving Up Solutions dinner, which is the alliance's biggest fundraiser, and also participates in other alliance programs.

"Capi is amazing," Handfinger says. "She's one of the biggest supporters not only of Cooking Matters but the alliance. She's always gone above and beyond."

Peck knows that putting together healthful meals can be a challenge, especially when kitchen skills are limited.

"It can be overwhelming trying to prepare nutritious food quickly and on a budget for people who haven't grown up cooking," she says.

Peck has taught classes with children and adults, and her fluency in Spanish led her to teach a Spanish language class, which was her first for Cooking Matters.

"It was a lot of fun," she says. "They have the whole curriculum in Spanish. It was the exact recipes, but I tried not to do Mexican food. They already knew their way around the kitchen and how to cook economically."

She also teamed twice with other area restaurant owners and workers to teach Cooking Matters courses to the Little Rock Police Department's O.K. (Our Kids) Program, which offers guidance to black boys ages 12-18.

"These are kids that are trying to stay off the street and build a better life," Peck says of the over 20 participants. "They loved learning these skills. It was a really good program. All these different restaurants volunteered to teach them and they got to go into the kitchens and see what it was like behind the scenes. It was super rewarding. We had a couple of guys who took the first class and then took it again."

Sgt. Willie Davis, the O.K. Program director, says the Cooking Matters experience was a good one.

"It was awesome," he says. "They liked the attention, and they loved the idea of preparing food themselves, and learning how to cut up food. It was an amazing opportunity for those young guys."

Davis said he was trying to remove the pit from an avocado when his son, who participated in the program, showed him how to do it quickly and properly.

Peck is hoping to hold a similar class for the G.E.M.S. (Girls Empowered by Mentoring Sisterhood), the department's program for girls ages 12-18.

For more information about Cooking Matters, email Alex Handfinger at alex@hungeralliance.org or call (501) 399-9999. 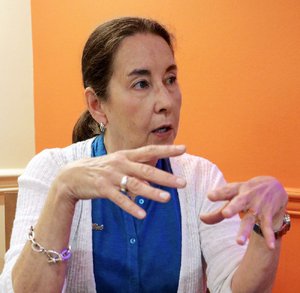 Photo by John Sykes Jr.
Capi Peck, owner and executive chef at Trio’s restaurant in Little Rock, is one of many volunteers at Cooking Matters, a culinary and nutrition education program from the Arkansas Hunger Relief Alliance.